Watch it your way...

Nine years ago I was visiting my cousin Danny in Cleveland when he showed me this cool new feature on his computer. He’d been able to rig a special card into his system that let him plug his cable connection directly into his CPU, therefore allowing him to watch TV on his monitor. 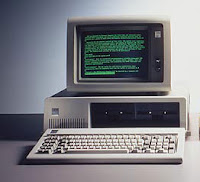 I was impressed, though that didn’t really mean much back then. I was still impressed by color monitors in those days. When the Longtin family played me a video of Jimi Hendrix playing a live cut of “Hey Joe” off a CD-ROM back in Kankakee, Illinois, I thought I was in Technology Heaven. (Actually, I was just relieved to hear a little Hendrix after three months off).

My cousin’s new toy was a perfect example of the trend of technology convergence. As naive as I was, even I could sense it happening. It felt like a no-brainer to think that eventually we’d be watching TV on the same systems we typed our school papers on. Wasn’t that what they did in “Back to the Future, Part II”?

A decade later, our media is becoming a technological Pangea. My computer right now is little more than a single flat-screen monitor, with the disc drive and the hard drive all built in. It doubles as my stereo, thanks to my sub-woofer enhanced speaker system, and thanks to streaming high-speed video (and the fact that we had to cancel our cable subscription), it is now my television, too.

I can’t remember the last time I watched one of my favorite shows live on TV. It was probably when I caught the Season 3 finale of “Lost” back in May. Heck, even then I think it was on TiVo delay by an hour so we could skip all the commercials.

Now that all the TV stations are making their shows available online, I am living in a virtual Utopia of Burger King-style “Have it Your Way” media on-demand. If I’ve got five shows I want to watch, I don’t have to be a couch potato every night to see them. I can just fire them up over lunch the next day, and not miss out on my chance to stand around talking to the same twelve people I know at the party that took place the night before. 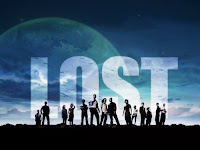 Last season my friend Wes and I got into a great habit of going to play basketball on Wednesday nights at 9pm, then unwinding at his place watching a recorded episode of “Lost” when we finished up two hours later. It was perfect escapist fare for two guys whose bodies wanted to forget their diminishing athletic capacities.

A week ago I got a text message (more technology) from my old roommate Aaron, who informed me that “My Name is Earl” had jumped the shark. I hadn’t seen any of the new season’s episodes yet, but thanks to NBC.com, I was able to jump on during an open mid-day stretch and fire off four quick twenty-minute episodes, then call him back and inform him that yes, the writers of “Earl” were in definite danger of shark-jumpage. 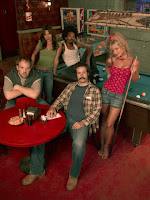 It helps that we’re going through a good stretch TV-wise, too; in spite of all the reality TV rubbish that still claims much of the market, there are a number of good shows out there right now: “Lost”, “Earl”, “Pushing Daisies”, “Heroes”, even “24”, as long as Kiefer Sutherland can avoid jumping any more trees. I’m just bummed that FOX cancelled “Arrested Development”, so I couldn’t stay up with that one, too.

There is a downside, of course. The online versions still have commercials. During the regular breaks, your monitor pops up a 30-second clip that is provided by a “sponsor du jour”. Often the same ad gets repeated four or five times through the same episode, which in my mind, makes the viewer less likely to patronize the sponsor, rather than more.

Granted, 30-seconds is a lot better than the usual epic breaks nowadays, though it is annoying when the system automatically bumps your resolution back down to “normal” when the show resumes and you have to jump up and change it back to “Full Screen Mode” every time. Plus the ads that try to play off the “online” component—like the Papa John’s Pizza chick that acts like she’s watching the show with you—are extremely annoying. But it’s a small tradeoff for free convenient media, I suppose.

I guess what I’m really getting at is that it’s a good time to be a consumer. Not only are the technologies completely bent on giving you more at your convenience, they are advancing at a startling pace. Who knows what will be next year’s equivalent to the iPhone. We need to be careful about overload, of course, but that’s just the point: this whole On Demand thing lets you dictate your own schedule. I’ve always argued that it would be great if instead of having to pay a large rate for two hundred stations that I don’t really watch, I could pay for two or three individually that I might actually view regularly.

Maybe this is how it’s going to happen.
Posted by The Professor at 10:01 AM