Last night as an introduction to the Cause/Effect chapter, I had my English 1010 students write about a past decision they wish they could change. I was hoping to droll up a lot of bitter resentment and deep regret; class goes a lot smoother that way.

Naturally, as they were composing away, I started wondering about the issue myself. I don’t have a lot of long-standing serious regrets in life, outside of blowing this totally obvious make-out opportunity in high school. I dare say that most of the mistakes I’ve made in life have worked out to my benefit, so who would I be to mess with destiny? 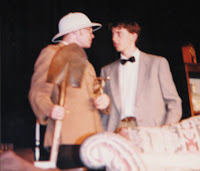 No, if I were to change anything, it would be little stuff, like skipping try-outs for "The Odd Couple” back in my junior year. When I saw my classmates performing the Neil Simon classic at the end of the school year, I realized how much fun I’d have had if I’d tried out myself. That’s why I tried out for “Arsenic and Old Lace” my senior year, and wound up having a transcendent experience portraying Teddy Brewster, a lunatic who’s convinced he’s former President Teddy Roosevelt. So that one kind of resolved itself.

One minor alteration I’ve wondered about took place during the Clearfield-Viewmont Sophomore Football game early in the 1991 season. After waiting for several years, my parents finally allowed me to play organized football once I hit high school, and Sophomore Football turned out to be my only official season. Thanks to my extensive playground workouts, I was a good enough receiver to practice with our B squad during the week (essentially making me the third-string guy), but team policy left me on the sidelines for the actual games until late in the fourth quarter of long-decided outcomes. (This, coincidentally, was the same policy that contributed to a spanking record of 1-30 for our varsity team between the years of 1990-1992).

The Clearfield game was a blowout, something like 28-7, so late in the fourth quarter, I was sent into the game…as a defensive end. Now, keep in mind, in spite of my obvious stature these days, back then I was only about a buck-forty soaking wet…and carrying dumbbells. I was merely coming in with a bunch of other benchwarmers to fill some time. Hence, as Clearfield was making a late drive, I suddenly found myself on the field during a goal line stand.

My assignment was simply to shoot straight ahead and hit anyone who happened to come in my direction, essentially to plug my hole (see diagram below). Should the tailback take a handoff into my lane, I was to stop him, thereby preserving our proud football heritage. 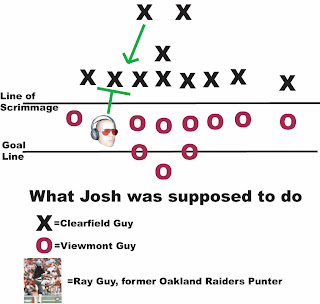 But that was too easy. Glancing to my right, I surmised with my keen Madden-like mind that were the tailback to take a handoff, he would probably drive straight ahead between our defensive tackle and nose tackle. So as the ball was snapped, I ignored my hole and doubled up on the one next to me.

This allowed the Clearfield tailback to dive into our end zone untouched, and in a complete state of ethereal shock. (See diagram below). 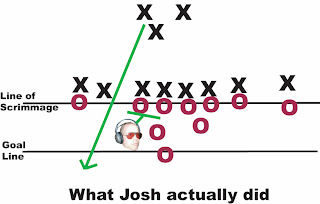 When our rag-tag defense gathered to discuss the previous play, I heard lots of the language I’d been hearing for the past three months. Fortunately, it wasn’t in my direction exclusively, since no one had seen who missed his assignment.

As our de-facto team captains screamed in a rage, demanding whose (expletive) hole that had been, I decided this was not the time to stand and deliver. First off, I was a receiver, and couldn’t really be blamed when I was so obviously out of my element. Second, these guys were benchwarmers, and I had no intention of dignifying their pathetic power play. Third, I knew these guys in real life too, and had absolutely no respect for them at all. The last thing I was about to do was stand there and take crap from morons like these.

So I just stood there and looked from guy to guy like everyone else, patiently waiting for the next play to start so everyone would shut up. Clearfield scored on their two-point conversion attempt, then managed to recover an onsides kick. As our starters looked on in horror, the coaches sent me and the rest of the backups right back into the game on defense, though this time I lined up at cornerback against Clearfield’s right wide receiver, a much more natural spot for me.

As I waited for the snap, I started to channel my inner Ronnie Lott, resolving to drop my opponent like a bad date if the ball even got near him. When the snap came, I stuck him off the line, followed him for a few yards, then turned and watched as the Clearfield quarterback completed a 50 yard touchdown pass to the receiver on the opposite side of the field.

Luckily the boys from north Davis County ran out of time, and we escaped with a curiously narrow victory. I did my job at the end, but from time to time have wondered what would have happened had I done it at the beginning. I might have been run over, but then again, I might have stuffed the tailback, or better yet, stripped the ball and run it back for a glorious Viking touchdown.

If I’d had an encouraging experience that day instead of a pathetic one, I might have found enough motivation to come back and play junior varsity ball the next year, where as it turned out, I would have picked up substantial playing time, since most of the best juniors were called up to play varsity anyway. I might have fulfilled my football dreams a little more completely, then returned to the playgrounds a more accomplished and confident player.

Then again, a second season might have distracted from all the AP classes I was taking, and steered me away from the academic pursuits that dominated the back half of my high school career. I might never have transferred back into drama, where I cultivated a creative outlet that has generated professional opportunities to this day (the drama coach, Mr. Anderson, was the man who got me involved in the KJZZ show this past summer).

So here again, I can’t really say I have any regrets, and that I’m still on my best path. It’s nice to be reassured of that now and then.

Though I still wish I would have made out with that blonde.
Posted by The Professor at 9:03 AM