The 2015 Post-Christmas Photo Essay: First Time in a Long Time

As I look through the photos I shot throughout 2015, a theme emerged. There were traditions I continued, and subjects I encountered for the first time. But often I found myself experiencing something--a place, an activity--for the first time in a long time.

Shortly after the end of the fall 2014 semester, I stopped shaving for a bit. Then a bit became about four months. Mostly I was curious to see how much gray was in my beard, and there was plenty. But there was still lots of red, too. I took a few self-portraits early in the year to document the first full beard I'd grown in six years, and my favorite was the black-and-white image below. 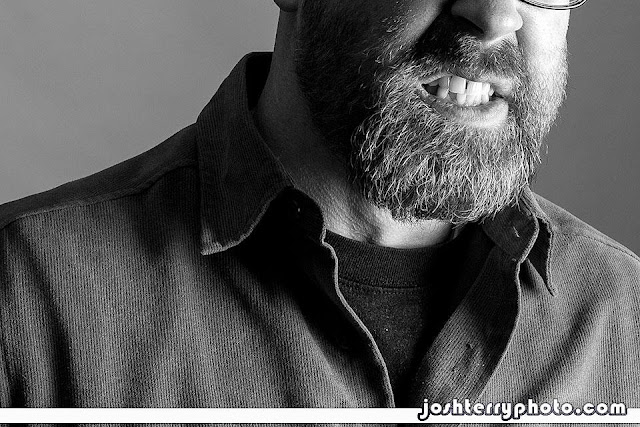 January marked two years at the KJZZ Movie show, and at the end of the month I attended my third Sundance Film Festival up in Park City, Utah. By the end of the year I'd reviewed 116 movies, and even wound up on the Rotten Tomatoes critic list. I snapped the photo below in the press tent outside the Village 4 Cinemas multiplex, where we all get into long, winding lines as we wait for different press and industry screenings. On a Saturday morning, I arrived to see a documentary called, "In Football We Trust," about LDS Polynesian football players. Apparently I didn't need to arrive so early. 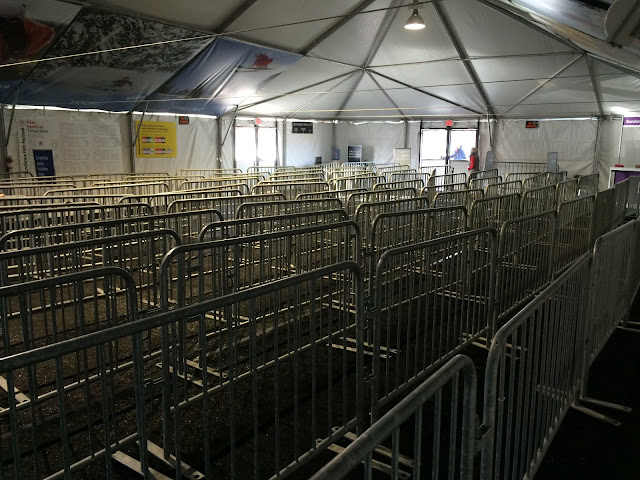 In early March I moved out of my loft apartment in Bountiful after 21 months and approximately 21,000 hikes up two flights of stairs. When I moved in I only signed a three-month lease, anticipating a quick stop before buying a house. It was a bittersweet moment, but it helped to have the generous assistance of numerous friends and family, not to mention a cheerful cleanup crew. 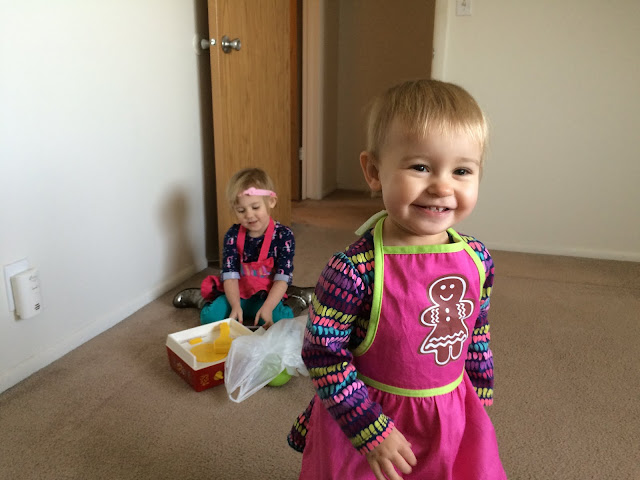 On Memorial Day the whole family visited my dad's brand-new headstone at the Bountiful City Cemetery. My family was a constant throughout 2015. A month earlier, a book called "Unselfish" was published in response to Kim Kardashian's collection of selfies. I was asked to contribute to the project, and wrote a brief essay about my paternal grandparents. 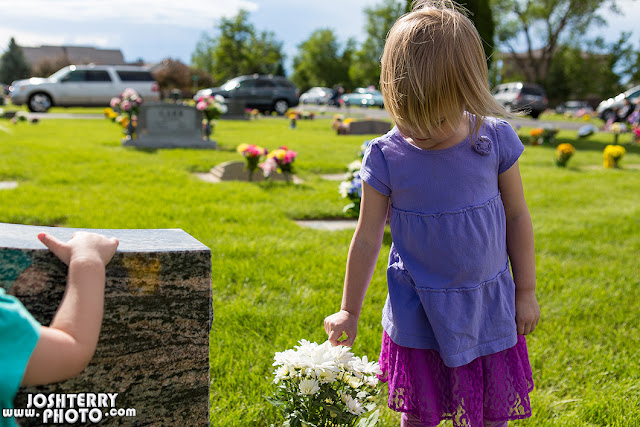 Summer brought a variety of photo opportunities, starting with a bike race called the Rockwell Relay that I covered with a couple of friends during my semester break in June. The route wound hundreds of miles through Southern Utah from Moab to St. George, giving us plenty of opportunity to see the best of the state along the way. 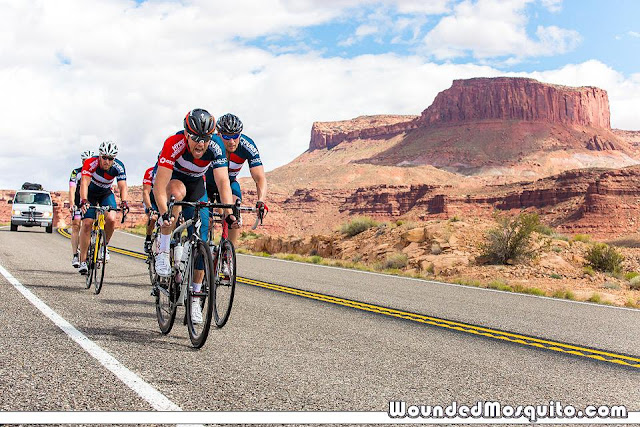 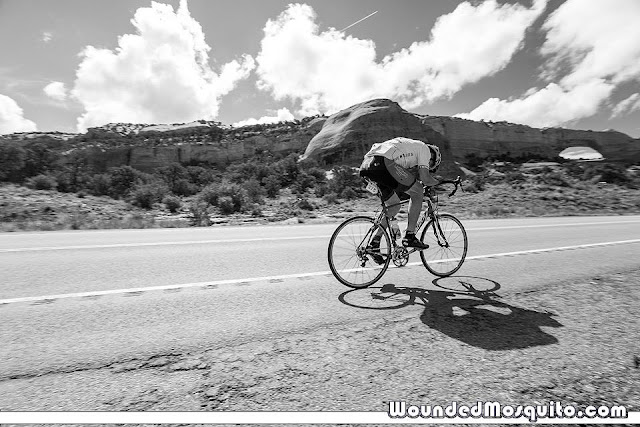 Towards the end of shooting the 4th of July fireworks up at Eaglewood Golf Course, I started messing around with exposure times, and wound up getting this shot of the finale. It isn't the kind of thing you'd find on a patriotic poster, but I was excited to see how the timing managed to catch the chaotic explosiveness of the spectacle. 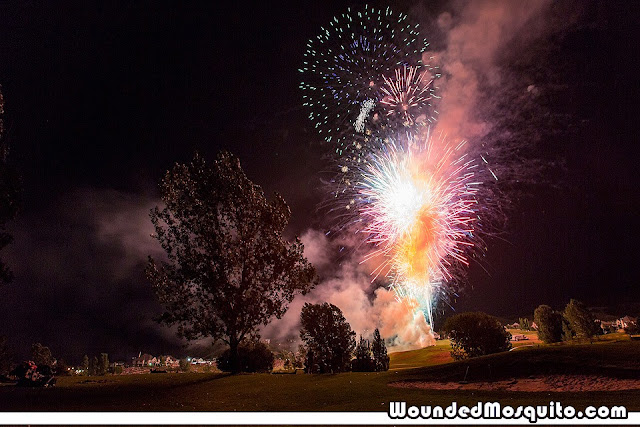 My buddy Travis has always provided some of my most unique photo opportunities. Thanks to him, I've shot everything from State Fairs to giant slip-'n-slides, and the photographs I took of his marriage proposal even wound up with TV coverage. During the summer I documented the brave moment he and his wife learned--in front of family and friends--the gender of their first-born child. The shot below captures the exact moment Mom and Dad found out they were having a baby boy (which arrived safe and sound in December). 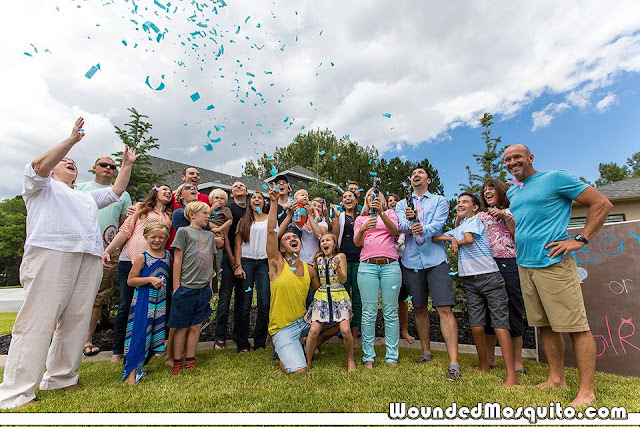 One of the most significant events of the summer was my mom's retirement from the University of Utah after over 20 years of service. I took this portrait of her outside her building after a farewell reception. I think the smile has a lot to do with not having to drive up to campus on cold winter mornings anymore. 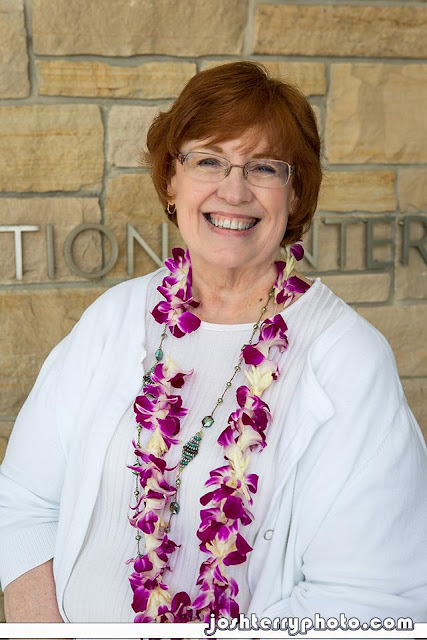 Thanks to logistics and adult obligations, it has been a couple of slow years for The Atomic Thunderlips. But the band saw a little action in early August when we were recruited to perform at Viewmont High School's Class of 1995 20-year reunion. It was our first show in a year, and the event gave me just enough justification to buy my first new drum kit in 15 years. 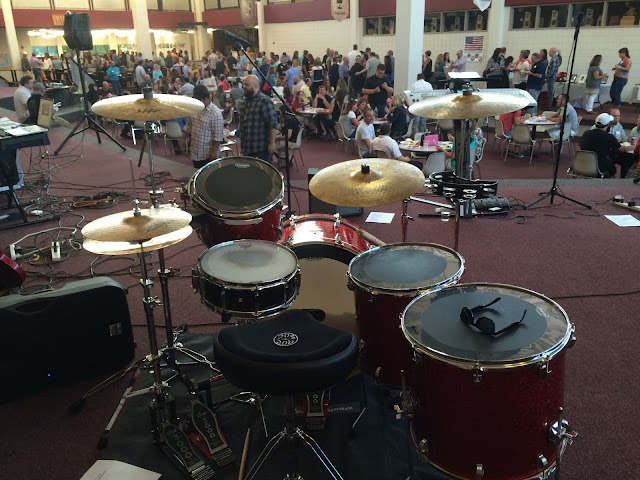 Right before leaving on my annual trip to Yellowstone, I launched a brand-new photography website that provided a massive upgrade over my previous online presence, mainly in that it allows customers to purchase prints online. Maybe it was this excitement that helped me get my first shots of the Milky Way in Island Park after three years of failed attempts. Towards the end of the trip, I chose to spend my traditional sunrise shoot on the shores of Henry's Lake. 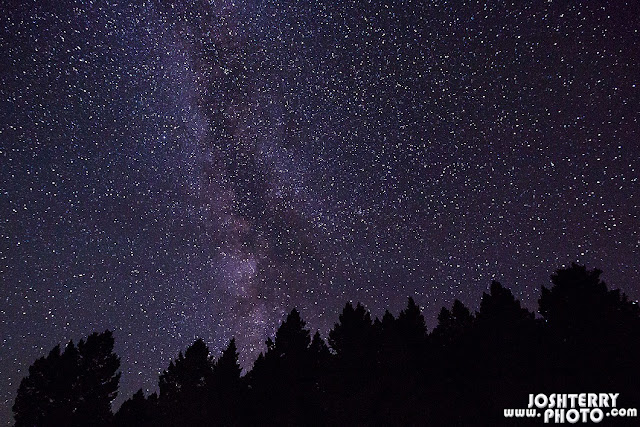 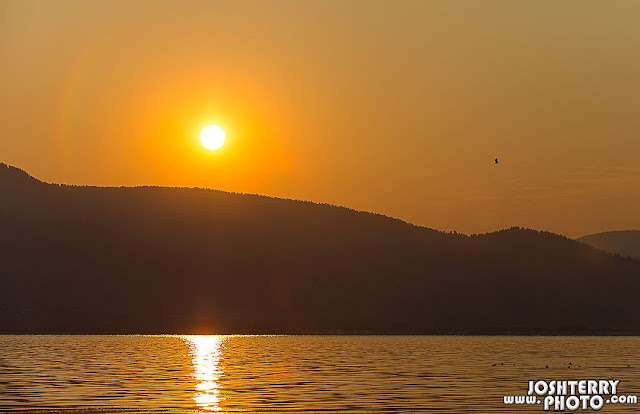 Fall semester 2015 marked six years since my return to teaching at Salt Lake Community College. These days I teach most of my classes at the South City Campus, and more often than not I wind up in classroom 2-169. But not everything was routine at SLCC. Back in the spring I taught my first section of English 2100 (Technical Writing) since I was teaching the firemen for the USU Salt Lake Center in 2007. 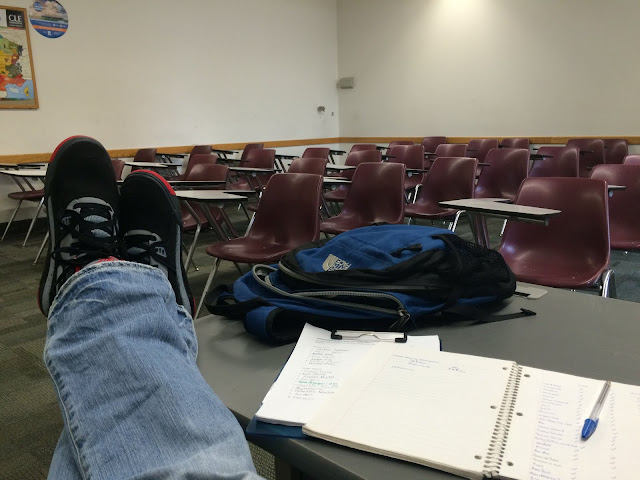 The most significant "first time in a long time" might have been my first return to Ohio since the summer trip I took back in 2000. Mom and I went back to attend the Turk family reunion, and I also took advantage of the opportunity to go see Ringo's drum kit at the Rock and Roll Hall of Fame, and take a rented Ford Mustang convertible down to Canton to visit the Pro Football Hall of Fame. 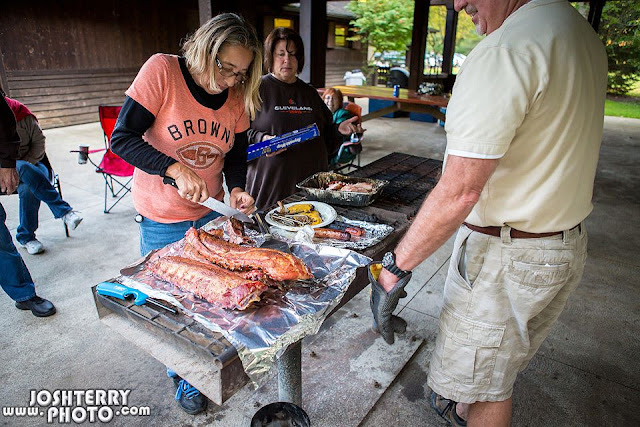 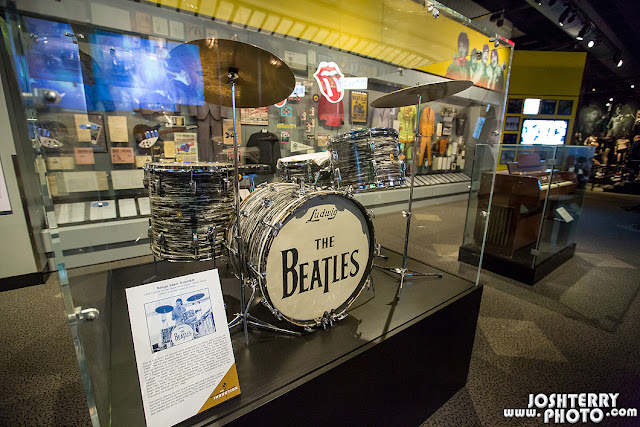 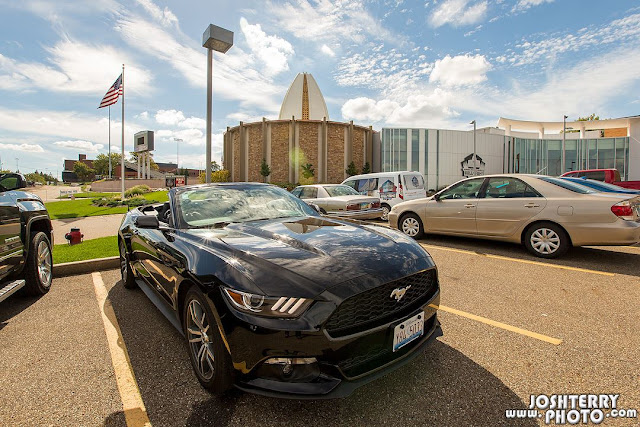 Around the time I was passing the 20th anniversary of my arrival at the Provo MTC, I was cranking through a series of family portraits, including three separate sessions up at the Bonneville Shoreline Trail in North Salt Lake. My favorite results came from a shoot for my longtime friends Steve and Sarah, who also became my neighbors in 2015. About a month after the shoot that yielded the image below, Steve took things up a notch and accompanied me to my first church basketball game for the Bountiful 19th Ward since the late 1990s. 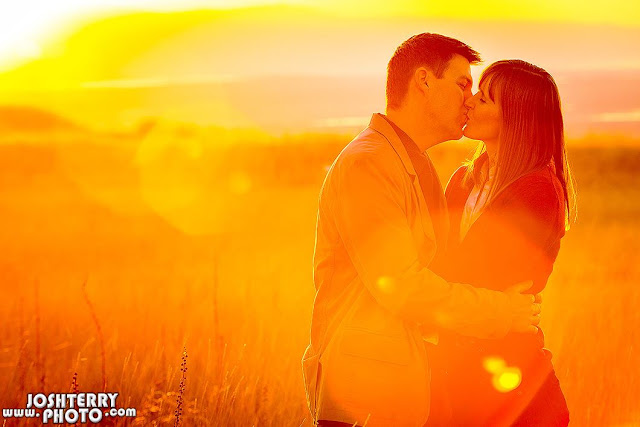 Nothing quite felt like coming full-circle more than screening the new "Star Wars" film on a cold Tuesday morning after a massive storm buried the Wasatch Front under two feet of snow. "The Force Awakens" felt like the sequel I had been waiting for ever since "Return of the Jedi." It was the first new "Star Wars" movie in ten years, and the first one starring Han Solo in 32. There was plenty of marketing and promotion running up to the release, and in this group photo below (taken by our MVP editor Scott Terrill), the Movie Show crew posed with some cosplayers and a familiar R2 unit. 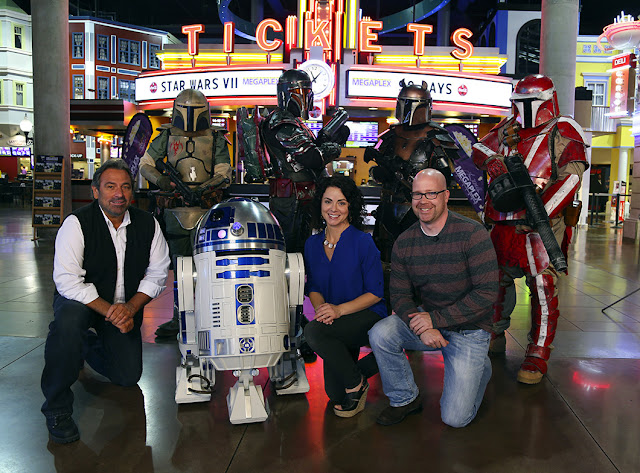 As Christmas drew near, it was hard to find the time to enjoy the holiday as I scrambled to finish my grading for fall semester, buy the requisite gifts, and handle the ramped-up holiday movie release schedule. But I was able to make it up to the Ogden Temple to get a slightly more colorful version of a shot I first tried last year. 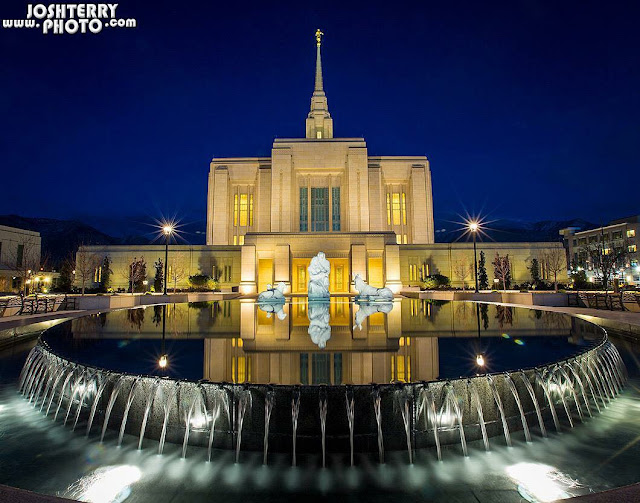 Since all of my family Christmas Day activities were scheduled for the afternoon, I decided to spend the morning out at the Farmington Bay Bird Refuge, in search of a Davis County sunrise. As the photos below show, the sun failed to make an appearance. But I did get a few nice shots of 2015's White Christmas, including a shot of a flock of birds that was swarming around a huge tree on my way out. 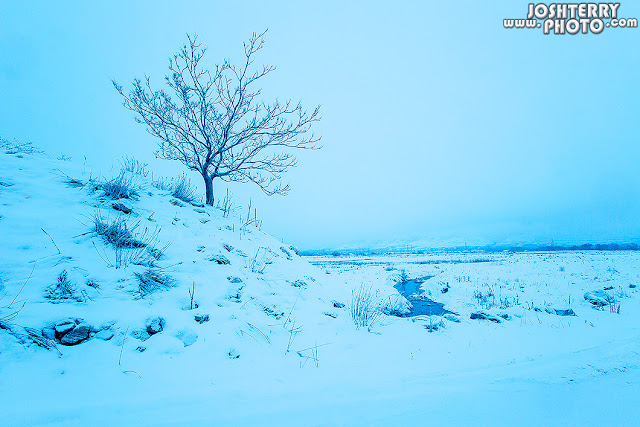 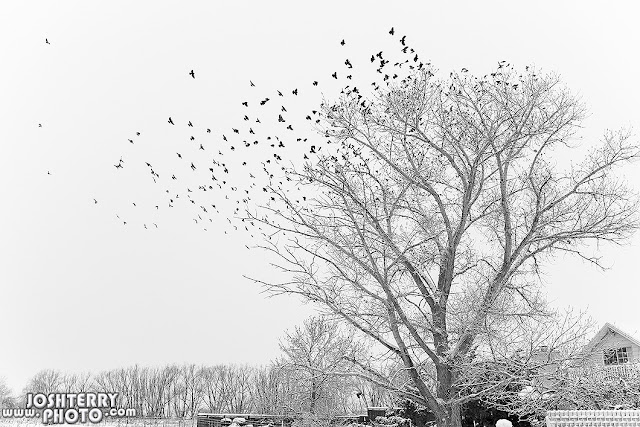 Later that day, the family gathered for some traditional gift giving and food eating. We made my grandmother's famous BBQ beef recipe and my favorite cookies, and in the middle of it all we took some luminaries out to my dad's headstone. 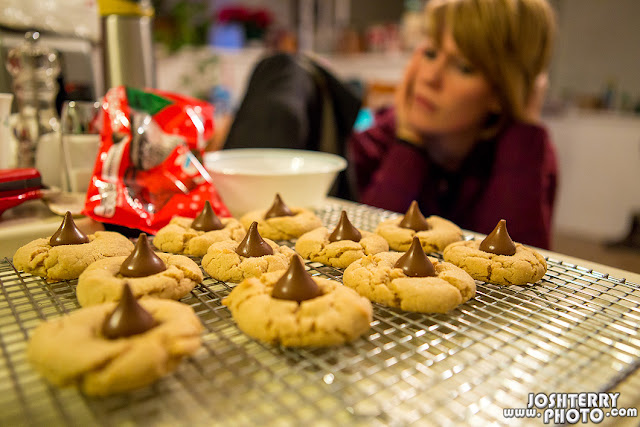 The Shot Not Taken

Thanks to my sister and brother-in-law, I was able to join in on some Christmas activities in the middle of the season's manic craziness. On one night, we all took the FrontRunner train into downtown SLC to see the lights, and on another, we took my nieces to see Santa Claus at Station Park.

But my favorite activity was probably the night we grabbed some sleds and headed over to Mueller Park Jr. High to take advantage of December's snowstorm. We brought my nieces along, and thanks to the dark and the cold we pretty much had the whole place to ourselves.

After laughing our way through a few runs through blinding white powder, I dropped onto my back, settled into the soft snow, and stared up at the stars I'd finally captured up in Yellowstone. I thought about what I was doing, how great it was, and how simple it was. It wasn't a big production, it didn't cost money, and yet because of the people I was with, it held more value than any expensive gift I could have been given.

More and more, adulthood just seems to be a delicate tug of war between life's trials and life's blessings, and often the difference between happiness and sadness is deciding which side of the fence most deserves your attention. If I'm being honest, 2015 had plenty of evidence for the trial side, but moments of clarity like the one I had on that huge, white expanse of snow are great for grabbing just enough perspective to carry you into the next day.

The last couple of years of my life have seen some dramatic changes, and I can't say that any of them resemble the life I once imagined years ago at the MTC. But the important stuff is still in place, and even the trials have had the unexpected effect of strengthening my testimony of the things I know to be true. So in that sense, warts and all, 2015 was a success, and 2016 has every reason to follow suit.
Posted by The Professor at 10:30 AM