Early last Saturday afternoon, while returning from yet another triumphant visit to the gym, I looked up at the mountains and noticed that winter looked like it was trying to eat autumn alive. So after a generous lunch and a quick “Lost” episode, I took up my camera and hoodie and decided to go parading.

My first stop was at Mueller Park Junior High, site of many football games and sunset pictures. From there I was able to take a few shots that demonstrated the aforementioned “eating” effect. Behold: 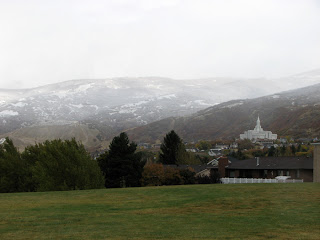 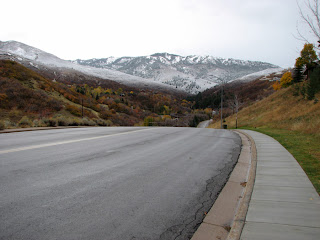 Far from satisfied, I continued on to the Bountiful Temple, where I thought I might try my hand at finding an angle of the Temple no photographer has already tried in the last thirteen years. Being such a dreary day, I wasn’t likely to get the kind of shot that turns up in the Distribution Center. I was more likely to get the kind of shot that Anti-Mormons send through PhotoShop to make one of those, “look at the evil imposing buildings the Mormons sacrifice virgins and juggle squirrels in” photos. To each his own, I suppose.

I climbed up the hill immediately behind the temple, carefully making my way past periodic piles of deer poops, and managed to get this photo, among others. I really liked the way the lake (or more accurately, the “southeastern marshy bits of the lake”) looked, so I tried to get them in the frame. 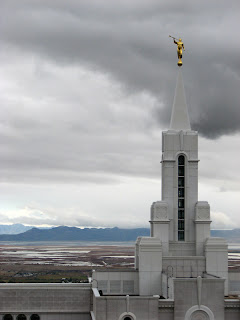 I soon became tired of this and made my way back down to the car, wondering if I could get another episode of “Lost” in before going off to my evening band rehearsal. But then I spied a cool tunnel that leads underneath Bountiful Boulevard at the opening of Holbrook Canyon, and I decided that I should Carpe my Diem.

On the way over to the tunnel I found this cool semi-defaced bench, which looks like a perfect romantic spot for EMO’s to compare the scars on their wrists: 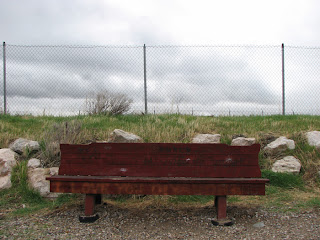 Outside of the tunnel, there is a big sign that says “Extreme Danger: Do Not Enter”. Here is what the tunnel looks like from the inside: 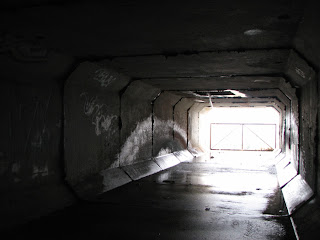 At the end of the tunnel, on the other side of a convenient iron gate, there is a dramatic slope down into the valley, kind of a luge-run for morons, that has been caked with algae and moss. This, I am guessing, is the reason for the warning. 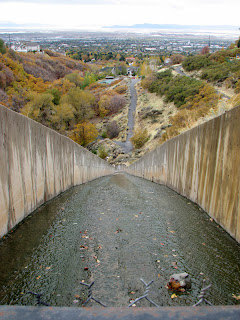 When you look back at the tunnel from the other direction, you can get a better look at the water drain you had to side-step on your way through, as well as the graffiti other sign-ignorers added to the tunnel décor previously. 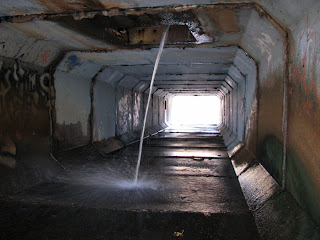 Here is one such piece of graffiti, apparently a surrealist advertisement for “Queer Eye for the Straight Guy”: 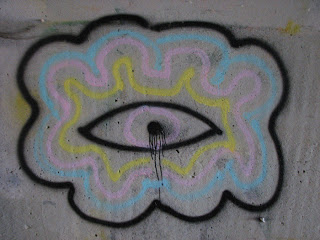 Once again I was faced with the opportunity to go home to the warm confines of my basement, with my Velvet Elvi and my roommate’s bootleg “Lost” episodes. But then I looked down and saw a waterfall coming out of the mouth of the canyon, and decided my journey was far from over. I seem to have a weakness for waterfalls, probably brought on by that scene in “Last of the Mohicans”. Ah, such passion. 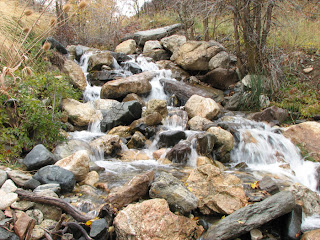 Once I made it down to the actual stream, I had no choice but to wander up the canyon trail a ways and see what else I could find. Strangely, I had never hiked this canyon before, in spite of the fact that I regularly drive an hour north to hike Adam’s Canyon in Fruit Heights or Waterfall Canyon in Ogden.

Most of the fall foliage had either been dispatched by the weather or was so limp and soggy to have lost its luster, so my photos weren’t terribly moving up this way. I did find a cool spot to do a scary movie picture, one of those, “the tree branches are skinny and web-like, therefore this forest is evil” shots. 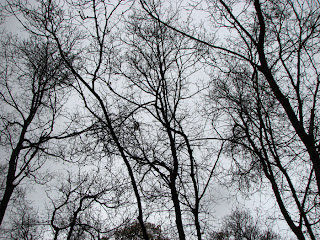 Not far away, I found a curious sight that seemed to define the very “winter eating autumn” theme: a solitary moss-covered branch, lying broken in a bed of withered leaves. It kind of reminded me of those scenes in horror movies where they find the dead body in the forest, only in this case it’s just a branch. 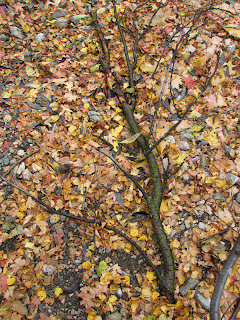 After lingering a bit and pondering on the enigmatic existence I live these days, I made my way back to my car, back to civilization, and was still able to nail another episode of “Lost” before joining my new bandmates for a rehearsal in a Centerville basement. We rocked loud, and we rocked hard. I think we might call ourselves the Electric Prunes.
Posted by The Professor at 10:58 AM