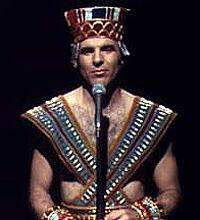 Late into the evening of October 23rd, 1976, about halfway through Steve Martin’s debut as a Saturday Night Live guest host—the same night he did the famous King Tut routine—my mother went into labor. So she and my dad flipped off the black and white TV, left the warm confines of their red brick Centerville, Utah rambler and drove into Salt Lake, where I was born about twelve hours later. It pretty much went downhill for them from there. Steve Martin, on the other hand, went on to host SNL 14 times.

Thirty-one years later, their firstborn sits reflecting on the first year of his thirties, wondering how on earth he ever wound up there. Seriously, I used to dread this.

But as I look at it, in spite of some difficult setbacks, the first year post-30 hasn’t been so bad. In fact, it’s been very cool in a lot of ways.

When I first crossed the threshold a year ago, I was living in Woods Cross, and just in the process of getting involved in a long-distance relationship. Obviously it didn’t work out in the long run—didn’t make it to Christmas, to tell the truth—but you have to admit, it is pretty cool when someone of the opposite sex thinks enough of you to fly out of state to hang out with you for a weekend.

Still, the obligatory post-relationship funk, combined with work frustrations, moving frustrations (three times between Thanksgiving and St. Patrick’s Day), plus the death of my dog Otto made the first few months of being a “thirty-something” a bittersweet experience at best. By the time the higher-ups at USU opted out of a plan to make me a full-time instructor in the spring, I was beginning to think that 2007 was going to be a long series of jimmy-kicks.

But that’s about when things started turning around. After saying farewell to my full-time benefited USU office gig (I still teach adjunct courses for them), new opportunities started popping up, and the rest of the year offered plenty for the highlight-reel:

*Almost out of nowhere, I had half a dozen of my comedy sketches aired on a KJZZ variety show called “B All Over”.

*Another short film (“A Manly Guide to Hiking the Subway”) was warmly received at the 2007 Epic Summer Film Festival.

*I finally got to throw another Toga Party and redeem myself for the Debacle of 2001.

*Thanks to dirt-cheap season tickets, I got to watch the Jazz make the conference finals.

*I met Ray Bradbury (and Marc Singer—“The Beastmaster”) at Comic-Con 2007 in San Diego.

*I was a public address announcer for the Bountiful Days of ’47 Parade for the third year.

*Besides the San Diego road trip, I also got to take trips to Yellowstone, Jackson Hole, Zion National Park and Vegas (where I saw Eric Clapton at the MGM Grand).

*I finally read a Harry Potter book, and subsequently wound up standing in line at Wal Mart at 1am waiting to pick up the last entry in the series.

*In July I dislocated and lacerated my right index finger while playing volleyball, but even that was cool because the girl that worked at the physical therapy clinic was really cute.

One of the coolest experiences of the last year was having my friend Cherina come out to visit from Chicago. I first knocked on her door back in the summer of 1997 with Elder Mike Heaps on Chicago’s South Side, and in all the time since, this was her first trip out to Salt Lake. Cherina, Heaps and I joined up with Spencer Affleck (who was Heaps’ companion at the time) and had a mini-reunion at the Joy Luck Restaurant in Sandy over Conference Weekend.

It was great to get the group together again, and surreal at the same time. Heaps and Affleck have five kids between them, and have been living the domesticated life for some time now. But that wasn’t the surreal part—I’ve grown well accustomed to seeing my longtime friends with kids in tow. What was strange was how they seemed to marvel at the life I led, as if I was some sort of a cult hero adventurer, taking trips, pulling outlandish stunts, living by the skin of my teeth.

I guess compared to the traditional nuclear family lifestyle, my enigmatic freelance existence would sound pretty far-out. But it’s hardly what I would call exciting. I may be an English teacher, but I’m no Indiana Jones. I guess what I can say is that even though some of my long-term goals remain unfulfilled as I cross the frontier into 31 (in Single’s Ward terms, I am now in “extra innings”), I have been very blessed in the meantime. And I certainly can’t complain about that.

So now I’m still in Bountiful with a law student and a guy that gets food additives in the mail on a regular basis, living the single life to its fullest. Aside from all the video stuff and the writing stuff, I’m even getting ready to play my first drum gig in over two years at the next Ward Talent Show. If I can get a Turkey Bowl set up for Thanksgiving, I’ll be in Fat City.

Yeah, life looks pretty good. 31 should be sweet for this wild and crazy guy.
Posted by The Professor at 4:25 PM