A year ago a dozen of my fellow zombie fans gathered in an unfinished basement in Woods Cross, Utah to screen a pair of zombie gems: “28 Days Later” and “Night of the Living Dead”. Good times. This year the same group, with an addition and a subtraction here and there, gathered in my relatively new Bountiful digs to take in the next round. Zombie Fest 2007.

Round One of the double-header went to:

Shaun of the Dead
Three stars out of four

Thanks to the heads-up TiVo mastery of my buddy Jared, we were able to score an edited-for-TV copy of this one off Comedy Central. (Putting together a zombie fest for Mormons is kind of a tricky maneuver, you see.) “Shaun of the Dead”, even at a mere three years of age, has quickly become a cult classic, and was most appropriate to kick off our little get-together. It’s the satirical British comedy version of “Night of the Living Dead”.

The plot here is simple: Shaun, a disillusioned electronics salesman, must fight off a band of zombies as he tries to successfully escort his best friend, ex-girlfriend, her friends, and his mom to his favorite local pub. Along the way they manage to take every classic zombie movie cliché and turn it on its severed head.

There are too many details to praise in this one, but if I have to point out one specific element to endorse, it is the fact that for once, zombie fights are portrayed in a realistic manner. What I mean by that is Shaun can’t hit anything. Not with a gun, not with a rock, not with his extensive record collection. Most movies make the good guy into a gun-toting natural (while simultaneously turning the bad guys into cross-eyed mouth breathers), but not here.

Shaun of the Dead is the natural heir apparent to the legacy of “Airplane” and “The Naked Gun”, namely, satires that parody a genre in an original way. Shaun is not a “comic” re-hash of infamous zombie flick scenes; it takes a broad concept and skewers it with its own original story. It’s going to be popular for a long time to come.

Shaun of the Dead (the version we saw, anyway) is rated TV-14 for lots of zombie-related violence, blanked-out cussing that’s pretty easy to interpret, and a scene where three people brutalize this old guy with poker cues while listening to Queen.

Once the zombie comedy installment was out of the way, it was time for the real thing; a repeat viewing of the original bad boy itself:

The best thing about the original “Night of the Living Dead” is that it starts off squarely in “peanut gallery” territory and gets scarier as it goes along. As corny and “old-fashioned” as it may seem early on, what with the heroine stumbling through the cemetery, losing her shoes, and seemingly unable to outrun a staggering ghoul even when she gets to her car (and promptly runs it into a tree), those elements almost serve to make the later elements of the film all the more shocking. 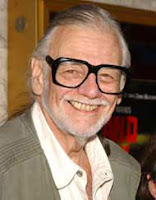 “Night of the Living Dead” was the first of director George Romero’s classic zombie films, shot in 1968 on a painfully low budget. (Wikipedia claims $114,000, while I swear I heard 20K back in the day). Low-budget or not, George Romero takes the hands-down title for “coolest old guy glasses on a director”.

It was one of the first of the pure shock-and-gore horror pictures, and even if the violence seems tame compared to today’s CGI-blood fests, “Night of the Living Dead” still gets my vote. Grainy black and white film with heavy shadows makes for better horror. Sometimes what you don’t see is a lot scarier than what you do.

Like “Shaun of the Dead”, its mentor has a simple plot: fugitives hole up in a rural farmhouse and try to fend off hordes of reanimated dead corpses that are determined to get inside and eat them some brains. At the risk of spoiling the film for the uninitiated, here are my personal favorite moments:

*Holed up in the farmhouse, near-catatonic heroine Barbara finally opens up and starts telling her harrowing story to fellow survivor Ben, who is trying to board all the windows up. Five minutes after trying to coax her into speaking, Ben is noticeably annoyed with Barbara’s rambling narrative, and drops a, “you need to CALM DOWN”, with a clear “this white chick needs to SHUT UP” look on his face. Classic.

*After Tom and Judy (token young dating couple) try to get away in the truck (which promptly explodes), the zombies go Donner Party in one of the first jaw-dropping moments of the film. Apparently intestines work kind of like Slinky’s.

*Once the mortally wounded kid in the basement finally kicks off, she comes back as a zombie, chews on daddy’s arm for a while, then takes a spade to momma. Think of the shower scene from “Psycho”, only four times as long. It keeps going, and going, and going…

*When the long night of terror is finally over, lone survivor Ben carefully makes his way out of the cellar when he hears the rescue party outside. He creeps into the living room, peers out the window…and gets popped by a local who thought he was a zombie. This is George Romero’s way of saying “Papa don’t take no mess.” Happy ending? Thpppt!

“Night of the Living Dead” never got a rating when it came out, but as you can imagine, it might be a bit much for folks that don’t dig movies about flesh-eating zombies. Mm, mm, good.

So, with Zombie Fest 2007 behind us, we sat back and reminisced on more of the great scary movies of years past…“Halloween”, “Texas Chainsaw Massacre”. That lasted about five minutes, then naturally transitioned into Erik telling us some of his Rush concert stories and how he had a brief meaningful encounter with Geddy Lee. Fun night.
Posted by The Professor at 6:27 PM