How to heckle professional basketball players

This handy guide will give you simple instructions for enjoying one of the most important roles of a basketball fan: taunting professional basketball players. Heckling is a high art form that spans a wide range of professional and amateur sports, but professional basketball provides a unique venue that offers both prime opportunity and high risk for its participants. Following simple instructions like these will ensure a fun night of mockery for both amateur and veteran fans, and will protect you and your loved ones from unfortunate episodes like 2004’s “Malice at the Palace”. Have fun!

Today’s heckler can use a myriad of tools and appliances to augment his efforts, but keep in mind: no matter what you bring, be careful not to actually throw it at your chosen target. That’s when players start rushing the stands.

A well-prepared heckler will use any or all of the following:
megaphone
multi-colored afro wig
obscene t-shirt
offensive poster
cow bell
air horn
Regis Philbin

The actual steps in heckling are quite simple, more a basis for improvisation than a series of mandatory technical instructions. More important is the application of these steps in regards to the KEYS TO SUCCESS that follow.

Again, you can vary instructions like this, and instead choose to taunt the team owner, the referees, or a member of the dance team. But since heckling is an extension of cheering your own team more than anything else, tradition holds that the smartest target would be an actual player.

Actual heckling can be anything from yelling “you suck” to burning them in effigy for fifteen seconds before security removes you from the arena, but the effective heckler manages to strike that perfect balance between creativity, originality, and legally protected speech.

This is one of the most vital elements of any heckler’s effort. No one can hear you if you’re sitting in the upper bowl (see Figure 1), but if you’re sitting on the row behind the team bench (Figure 2), you run the risk of getting attacked by your chosen player’s posse (which would waste the $500 you spent getting that ticket in the first place!) The best range for heckling is somewhere between 5-15 rows from your chosen target (Figure 3). 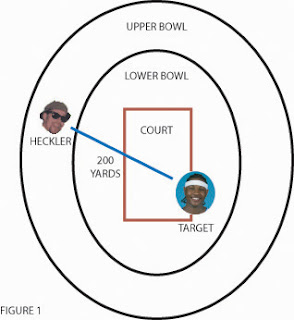 Washington Bullets super-heckler Robin Ficker is a good example of the 5-15 range. For years, Ficker hovered half-a-dozen rows behind the opposing bench in , taunting the NBA’s best with a variety of exciting insults and visual aids.

Spike Lee is an example of how you can take a front-row angle to heckling. Since Spike sits at center court across from the team benches, he can exchange verbal jousts with folks like Reggie Miller and Michael Jordan without concern for any unseemly posse interaction. Of course, Spike can sue anyone that messes with him, so that helps out too. 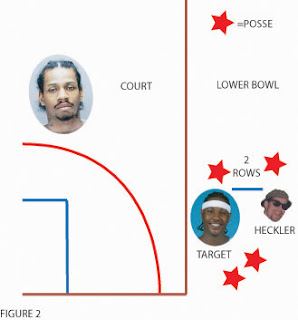 Expressions like “You Suck!” and “Airball!” are well-worn tools of the trade, but most players have learned to block such verbiage out. In order to properly announce your presence, you need to put in more of a creative effort. When I heckled Mayor Rocky Anderson at the 2002 Pioneer Day Parade in Salt Lake City, I yelled “Yah Bum, Rock!” in my best “Mickey” impression from the “Rocky” movies, thus distinguishing myself from hecklers using common expressions like “Boo” and “Burn in Hell, Rock!” 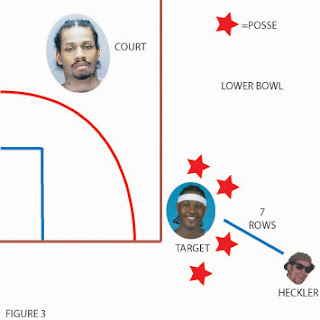 Now, good heckling is a firm tradition of basketball, and one of the key reasons wanna-be sports like golf and tennis will always be second-rate. But sometimes lines need to be drawn, if for no other reason than to avoid provoking your target from charging into the stands to go Stephen Jackson on your behind. Topics like race & ethnicity, religion, and a player’s mother are no-no’s. But there are plenty of other topics that are fair game, such as:

It’s fun to yell and boo a player when he’s standing at the free-throw line, but chances are, he’s not going to hear you above the rest of the crowd that’s yelling and booing at him. Unless you’re heckling a member of the home team, which is a different circumstance entirely. While you should feel free to yell and boo on occasions like these, you shouldn’t waste your best stuff on moments when your target won’t hear you. Repetition isn’t always a good idea, either. You might sound clever the first time you yell, “I could shoot 3-for-20 on fifteen mil a year, Iverson!” But after twelve or thirteen times, people around you might begin to think you’re stupid.

The key is timing. Save your best material for quiet moments when your target is most likely to hear your barbs, such as during timeouts, between quarters, during the National Anthem, or when the team trainer is working on his hyper-extended knee.

Following tips like the preceding will give you a healthy jump on your heckling pastime, but be advised: don’t expect immortal status right away. Skills like public mockery and humiliation take time to develop to their full potential. As with any other important skill, heckling is an art that takes practice, persistence, and time. So don’t get discouraged if Kobe Bryant doesn’t writhe on the court in the fetal position and pound the hardwood with his fist the first time you tell him only pansies wear yellow, but don’t let that stop you, either. Just remember how much they’re making for every one of those fouls and traveling violations the ref isn’t calling.

Player follows you into stands/Use date as human barrier

Player tries to laugh along, be good sport/Insult his sister

Posted by The Professor at 3:24 PM