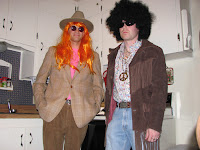 In order to properly accessorize this year’s Halloween costume, I ravaged my belongings for all the bling I had stored away over the years. I came up with a number of odd necklaces, and several old rings. Most of the necklaces still had functioning clips, but getting the rings to fit was a bit trickier. I tend to have big knuckles—even when they aren’t swollen from summer dislocations—and it's hard to find rings that actually fit my fingers. I can’t even wear my CTR pinky ring anymore, because my finger got too big.

One of the rings that did fit OK was a turquoise thing I inherited from my grandpa a few years back. I enjoyed wearing it enough at last Saturday’s Halloween party that I went ahead and left it on for church the next day. But when my sister caught sight of it, she warned me that I might be sending the wrong signal, since I happened to be wearing it on my wedding ring finger. 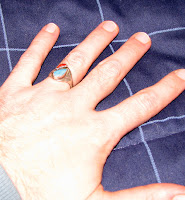 I disagreed with this assessment, since clearly my ring had no resemblance whatsoever to a wedding band. My ring was a thin silver band that bulged out at the top with two embedded stones. One was the aforementioned turquoise stone; the other was about half its size and red. Proportionally, this ring reflected my results from the “Color Code” personality test: Dominant Blue with a nasty Red streak.

I didn’t see how anyone would misinterpret my ring, but it did remind me of the “Seinfeld” episode where Costanza wears a wedding band to see if it will make him more attractive to women. In true Costanza fashion, it does, and one such beautiful single woman tells him, “That’s too bad [you’re married]; I really have a thing for bald guys with glasses.”

As that particular experiment has already been played out for me, I have no reason to repeat it. But it does call to attention one of the curious aspects of the single’s scene: ring spotting.

I can pretty much guarantee that within 3.5 seconds of encountering any woman, I will know if she’s wearing a wedding ring. It’s practically a reflex. It happens with waitresses, cashiers, or even people sitting three rows ahead of me in a movie theater. Whenever I see a cute girl, I instinctively zero in on the left hand. If there’s no ring, I start mulling ways to meet her (and usually subsequent excuses for chickening out of it). If there is, I go into “BLOCK OUT! BLOCK OUT! ADULTERY! ADULTERY!” mode.

Actually, at first this only happened with girls I was attracted to, but now it seems to happen when I meet any woman. Like I said, it’s almost a reflex. Girls my age, middle-aged women, department store mannequins, whatever.

“Oh, look at poor Dina. So lifelike. The mortician really did a wonderful job, eh?”

“Yes, and apparently she also had a successful love life.”

I don’t know if I speak for all single guys out there, let alone all single girls, but when you’re “on the scene” and have at least a hint of an interest in graduating from said scene, you tend to be curious about who is or isn’t eligible for upper-division coursework. In our culture, the ring is the signal (as opposed to the forehead dot in India or the forearm tattoo in Ogden), so that’s what we’re trained to spot. There are some “second-tier” signals—for example, the tendency for newlywed long-haired women to chop their hair into the “domestic cut”—but none is as reliable as that good old sparkly thing on the south paw. 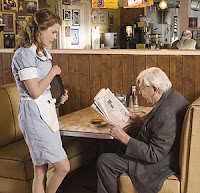 One must be careful, however, for all rings are not the same. One woman’s wedding band is not always another’s. For example, years ago I had an introductory-level crush on my Red Lobster waitress until my mother pointed out that even if her ring didn’t have a big rock mounted on it, it was still a wedding band. I’ve since encountered a number of wedding rings that simply have little diamonds embedded in the band itself. Tricky little buggers.

Worse yet, many women work in fields where they take their rings off to do their jobs, like nurses or personal trainers. When I went to get the stitches pulled out of my finger up at University Hospital last summer, this pretty physician’s assistant did the job for me. She wasn’t wearing a ring, but she was way too pretty and sophisticated and mature not to be married. (“Mature” is code for “obviously into at least her late twenties if not older, but if I were to say ‘old’ it would sound insulting”). I just couldn’t come up with a creative way of asking about her marital status while she was pulling stitches out of my hand. 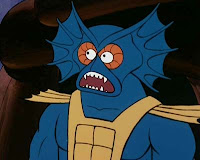 Then there are the girls that pull an Anti-Costanza and wear dummy rings to discourage male interest, and the guys in long-term successful marriages that just never wear wedding bands. And what about Mer-Man? He couldn’t wear a wedding ring if he wanted to. Such frustration. Such angst for the modern ring spotter!

But that is a topic unto itself. Unless you just want to take the advice of my old friend Brian, who once told me that the greatest pickup line in the world is, “Hi”.

He’s probably right. Jerk.
Posted by The Professor at 2:42 PM