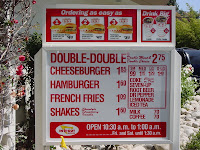 The local news has been buzzing in recent months as the long-awaited advances of In-N-Out Burger have begun making their way into the north countries, and yesterday the storied franchise opened its doors in Draper and Orem.   This hoo-ha comes as the pinnacle of a crusade-like invasion of similar burger joints, all based around the concept of a streamlined menu with customizable product.  Five Guys, Tonyburger...same type of deal.

I can't remember the first time I ate at In-N-Out, other than noticing that the fries tasted like actual potatoes.  That was kind of cool, though I'm not a big fan of the "super-skinny, quick to turn into a limp mush" fry concept.  The burgers are pretty good, though nothing I really feel like shouting about.

I get the feeling the place gets a lot of mileage from long-term market branding.  I was probably in my 20's before I went there, but I'd seen my classmates wearing the T-Shirts since I first set foot in Tolman Elementary School (on the days they weren't wearing TC-surf shirts, that is).  In that sense, In-N-Out is the Cafe Rio of burger chains: decent food, but overrated when you factor in all the hype.  It still falls under Hires and Crown Burger on my local list, and if I'm going to drive 45 minutes to get a hamburger, I'll be driving north...to the Maddox drive-in south of Brigham City. 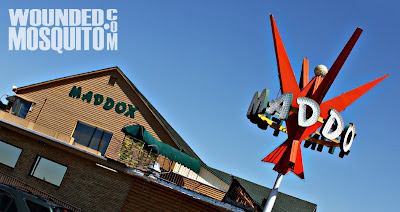