Yesterday marked the 20th anniversary of the fall of the Berlin Wall.  More importantly, it also marked the unofficial fall of Aerosmith.  According to the magic and all-knowing Internet, lead singer Steven Tyler has gone bye-bye. 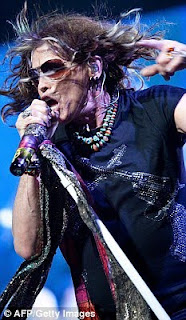 I'm not sure if yesterday's big announcement will inspire similar celebration in coming weeks, but it does remind me of one of our generation's greatest quagmires: how does one define the music of Aerosmith?

Seriously, I know that most people would just chalk up Aerosmith as another Classic Rock band that held on long past its prime--sort of an evolved version of The Stones, complete with gigondo-lipped frontman--but I don't think it's that simple.  Especially now that local radio apparently thinks U2 is a Classic Rock band, too.

Allow me to elaborate, via an understandably simplified Classic Rock pedigree:

1975-82: Blues-heavy Classic Rock is diluted into a pop-heavy transitional period, through bands like Electric Light Orchestra, REO Speedwagon, and Journey.  Still rocking, but something bad is on the horizon. 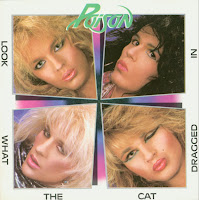 1991-95: Kurt Cobain almost single-handedly drives a stake through the heart of Butt Rock with the Grunge Revolution, then, his mission accomplished, blows his head off with a shotgun.

1995-Present: Charlie Watts keeps playing drums for the Stones, even though at heart he's a Jazz guy.

So where does Aerosmith fit in there?  Well, their first "prime" was in the mid-70's, with songs like "Walk This Way" and "Sweet Emotion," which definitely place them in the "Bridge to Butt-Rock" category.  Then in the 80's, they recorded "Love in an Elevator," which fits nicely along such brilliant Butt-Rock chart-toppers as "Unskinny Bop" and "Cherry Pie."

But they didn't stop there, oh no.  Somehow they survived the Grunge Purge, and in the mid 90's, they were still topping the pop charts with...well, I can't remember the names of the songs, but I do distinctly recall an album with a cow on the cover.  In fact, even as late as 1998, they were recording pop hits, like the one that played in the background of "Armageddon" over and over while Ben Affleck made out with Liv Tyler (Steven's daughter, strangely) and Bruce Willis saved the Earth from total annihilation by blowing up an asteroid with a really big drill (true). 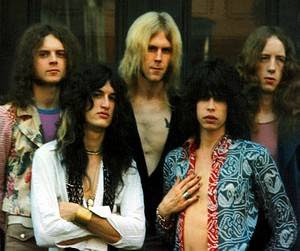 Now, you could continue the Stones comparisons here, since Mick (Jagger, not Taylor) and the boys were still touring around and releasing albums.  But that doesn't work, because no one cared about the Stones new albums.  They were more interested in listening to the old songs and making jokes about how Keith Richards looked like Jack Sparrow's dad.

But no one was making "old man" jokes about Steven Tyler, and Aerosmith just kept trucking along...until yesterday, apparently, when guitarist Joe Perry threw Tyler under the bus for quitting on the band a long time ago.  (Or maybe it was Tyler who threw Aerosmith under the bus...I guess it depends on whose side of the story you listen to.)

At any rate, I still don't know how to put the work of Aerosmith into context.  I don't really feel comfortable placing them with other "genre transcendent" artists like Stevie Wonder, whose music truly defies categorization, because Aerosmith pretty much always sounded like a pseudo-Classic Rock/Butt Rock band.  I just don't get how they survived Grunge and managed to keep recording marketable singles for so long.  If that sounds like a back-handed compliment, I guess it is.

It took a while to appreciate the fall of the Berlin Wall.  Maybe twenty years from now, I'll be able to put the Aerosmith thing in perspective, too.
Posted by The Professor at 9:36 AM