I almost forgot my anniversary.

As of this semester, it has been ten years since I taught my first English composition class. Not ten years of consecutive classes, or semesters, or school years, even--I took two years off to work full-time in television--but ten years since the whole thing started. Ten years since I first walked down into room 006 on the basement level of the Utah State University Communication Disorders Building, stood in front of twenty-five aspiring college freshmen and announced, "I'm Josh, and I'll be your instructor this semester."

It's been about ten and a half years since Professor Melodie Graulich convinced me I could even consider doing something so bold. The previous spring I walked into her office in the Ray B. West building to discuss the prospects of my entering USU's graduate program in American Studies. But as we sat there amid her stacks of papers and books, the spring sunshine streaming through big picture windows and illuminating her collection of Native American art on the office walls, the conversation took an unexpected turn.

"You'll want to apply for a graduate instructorship, right?" she asked.

I paused, not entirely sure what she meant.

"You'll teach English 1010 for the department," she said, "and you'll get a stipend to help with your tuition and housing."

I wasn't sure what a "stipend" was.

"Oh, I'm sure you're fine," she smiled. "We've got a program to train all our instructors. You'll come up about a week before the semester starts. You'll be fine."

Six months later, two weeks into my first semester and a week after I'd decided to ditch the shirt-and-tie routine, I sat on a table in front of two dozen empty desks, only minutes after my afternoon class had been dismissed. I had already stumbled through a half-dozen class sessions and collected the first assignment, and so far none of my students had caught on and exposed me for the clueless rookie I was. It was at that quiet moment that it dawned on me: I was a college English teacher.

Ground Zero may have taken place in the basement of the Comm Disorders building, but that was hardly the strangest place I've had to teach. In the last decade, I've taught in portables, a library reading room, a strip mall, computer labs, biology labs, an athletic center, and even a couple of fire stations. I've also taught in actual traditional classrooms in the actual English department buildings, but those have been the exception rather than the rule. Composition teachers are a nomadic lot; you teach where they tell you to.

I'm not sure how many students I've had in that time, or how many classes I've taught. I know I've graded hundreds of papers, if not thousands, and I've written a handful of recommendation letters, too. On a couple of occasions I've even written to judges to ask that my students be allowed to finish my course before returning to jail. Actually, thanks to advances in broadcast education, some of my students have been current inmates, and those guys were some of the best students I've ever taught.

I don't know if I'll still be doing this ten years from now. No idea if I'll continue the academic journey or wander off into some other uncharted career territory. When I was working in television, I knew that eventually I'd teach again, and I'd be surprised if it didn't remain some part of my career in the coming years. But even if it doesn't, it will always stand as evidence that sometimes with a little faith, you can do something you don't think you're qualified for.

I've had a lot of fun learning that lesson. 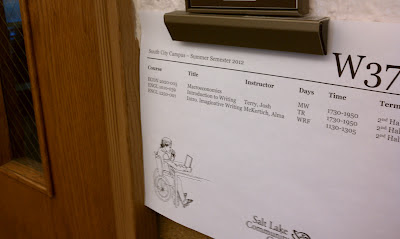 Posted by The Professor at 8:43 AM

Let's be honest: my blog posting in the last few months has been spotty, at best. But while I haven't been too busy on the blog, I have been writing elsewhere. To try to even things out a bit, I thought I'd share a few links to some recent film review work I've done:

Click here to read a review of "Moonrise Kingdom," the latest from Wes Anderson.

This link will take you to my review of "Premium Rush," which made me feel like a cranky old man while I was writing it.

Both of the previous reviews were published in the Deseret News. I also reviewed the new "Total Recall" through my Deseret News contacts, but it was published on a new website called OK.com that has been developed as a sort of interactive viewing guide for parents and such. You can access that review through the "Total Recall" movie page, or through my own critic profile.

Just in case anyone thought I haven't been pulling my weight lately...
Posted by The Professor at 8:55 AM