Like many people, most of the time I step into a voting booth I’m lucky if I recognize more than 25% of the names listed in front of me. Once I get beyond any high-profile races, I'm left to a series of hopefully educated guesses, crossing my fingers that I'm not voting in the apocalypse out of ignorance.

But this year is different. This year I know someone on the ballot. It's just too bad I can't actually vote for him.

Bountiful’s 2011 city council race has six candidates fighting for three spots, and one of them is my longtime friend Micah Day. I’m not usually the kind of person to go public with my political views, but usually I haven't played pickup basketball with the people listed on the ballot, either. Besides, since city council candidates don't have to declare a party affiliation, I can still claim political neutrality. 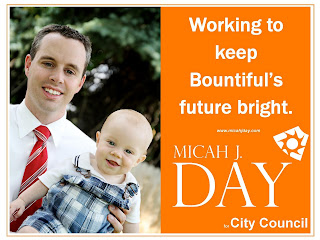 I’ve known Micah Day for several years, and over the course of numerous lunch visits to Red Iguana, casual conversations, and the aforementioned basketball games, I’ve always noted how he carried a natural interest in civic issues. Long before he expressed any interest in running for office, Micah demonstrated an investment in what was going on around him at a local level. While I was more interested in talking about how the Jazz were going to stay in playoff contention (Micah was an event manager at the Delta Center for several years), he would often shift the discussion to some local issue he’d read in the paper or heard while attending a local city council meeting.

It would be easy to say Micah would be an excellent city councilman because of his management experience (nowadays he's managing events at the Conference Center downtown), his ethical candor, or the fact that he looks good in a tie, but its that sincere, natural civic interest that does it for me. That's why when he told me at lunch a few months back that he was thinking of running for office, my first reaction was, "yeah, that totally make sense."

Since I'm currently living in Farmington, Micah won't actually be on my ballot, but that doesn't change the fact that he has my support. Micah Day will make an excellent city councilman. He’s not running out of ego, or because he craves a small chunk of localized political power. He’s not running because he feels entitled to the position. He’s running because he genuinely cares about making Bountiful the best city it can be. Bountiful City residents would be wise to note that on Tuesday.
Posted by The Professor at 8:36 AM