The last days of salsa...

The last few traces of summer are sitting in a plastic dish in my refrigerator.

For the last two years, I have enjoyed the fruits (and vegetables) of a brand-new hobby: salsa-making. The interest in this hobby has been milling around for years, at least as far back as when I heard that fellow Chicago missionary and Blues Brothers enthusiast Damien Nielsen had a salsa-maker. But it wasn’t until nine years after the mission that I finally decided to throw some ingredients together.

The initial results were very encouraging. I had no idea how it would turn out, but my first batch was an epiphany of fresh flavors. The first batch quickly turned into a second, and then a third, and then I won the first annual UteTailgaters.com salsa contest with the stuff.

Winning the contest was seriously one of my proudest moments from the last several years (as the sheer frequency of my referencing the story will attest). The thing is, I’ve received generous compliments over the years for artistic ability, writing ability, and my sense of humor. But getting formal recognition for something as completely unrelated as cooking felt incredible. That’s why I list it on my resume.

Not that winning the contest was an arduous task in itself. It turns out salsa making is pretty basic…you cut stuff up and stir it together. The only real difference lies in what you cut up and what proportions you use.

My only tip is to use fresh ingredients. This is why for me, salsa season lasts between the end of July and the middle of October, or roughly the period when you can get fresh local tomatoes. Since I am too lazy to grow tomatoes effectively myself, I usually swing up to Perry, Utah and shop at Pettingill’s, the first stop on Utah’s Famous Fruitway. That way I can get lots of other fresh stuff (jalapeno peppers, onions, peaches, blackberries), and have a perfect excuse to run up to Maddox for a burger afterwards.

From there, like I said, it’s all about ingredients and proportions. As one who favors the spicy end of the salsa scale, I tend to use more jalapeno peppers than most folks. (This past summer I bought a bag of habanero peppers, but after conducting the first—and last—“Pepper-Off” with my old roommate Brandon in Island Park, I opted not to use them in any of the salsa). 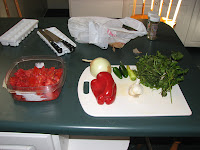 For the sake of making your Wounded Mosquito experience as valuable as possible (and to show that I am not paranoid about my award-winning ways), here is my basic recipe, using rough proportions:

1. Five good-sized tomatoes
2. One-half of a decent sized onion
3. Three jalapeno peppers (with seeds)
4. Lots of cilantro
5. Three cloves of garlic
6. One-third to one-half of a red or orange or yellow pepper (depending on aesthetic goals).
7. Miscellaneous (Other types of tomatoes, green pepper, etc.)
8. Salt (shake a layer over the top of the salsa, mix, then shake another) 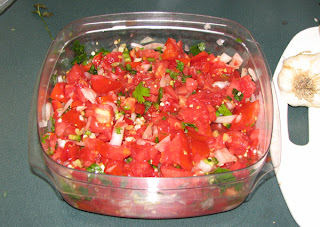 Now, like I said, this is the recipe for the hot salsa. This year, in an effort to broaden my skill set, I tried to make a milder peach-based salsa. Basically, you drop a tomato or two, add at least three good-sized peaches, and cut out the jalapeno peppers. (I guess the garlic is optional, too).

Unfortunately, this year’s title defense at the 2007 UteTailgaters.com Salsa Contest did not see a repeat performance. While I did get a few scattered compliments, for some reason my entry wound up tied for fourth place out of six entries. While I was fine with losing, it did bother me that the only other entry I thought was worthwhile was the one I tied with.

I kind of felt like Corporal Snark in Catch-22, the mess hall chef who “mashed hundreds of cakes of GI soap into the sweet potatoes just to show that people have the taste of Philistines and don’t know the difference between good and bad.” I tried to figure out how I could win one year and have such a dismal showing the next, finally rationalizing that most of my voting public came from Bountiful, a population that has kept the El Matador in business for years, and I felt a little better. Not that I wanted to be bitter or anything.

But it’s all academic now. We’re past the first hurdle of October, past General Conference, and even past the first snow of the season (sort of). My last run to Perry is nearly a month behind me, and any visits north for the next six months will be Maddox-based only. And now, the thin remnants of the last batch of 2007 salsa sit at the bottom of my stainware dish in my refrigerator, waiting for three or four tortilla chips to finish them off.

Well, actually I think that some of the peach salsa is still in a container upstairs, leftover from our T-shirt party three weeks ago. My roommates really need to clean out their fridge more often…
Posted by The Professor at 3:16 PM