The blog hasn't seen a lot of action this year. After setting a goal in 2013 to post something every week, 2014 saw a focus on other priorities.

That's not to say I wasn't writing. In addition to penning weekly movie reviews for the Deseret News (over 80 by year's end), I started a lot of posts I never finished. Partly because I wanted to raise the standard for what I put out. Partly because life kept getting in the way.

But even without any posts since September, it's still been a busy year, so here's a quick recap:

January saw my second trip to cover the Sundance Film Festival and the first anniversary of my time on the KJZZ Movie Show. Gradually I adjusted my teaching schedule (I'm still teaching English composition at SLCC) to make room for more evening screenings, and as 2014 got up to speed, I found myself averaging about two film reviews a week and four TV broadcasts a month.

Then in February I got to trade the merciless Salt Lake winter inversion for the decadence of Sin City, thanks to a weekend trip to Vegas with two of my oldest and closest friends. The trip resulted in lots of pictures and an evening at Caesar's Palace that inspired one of this year's few blog entries. 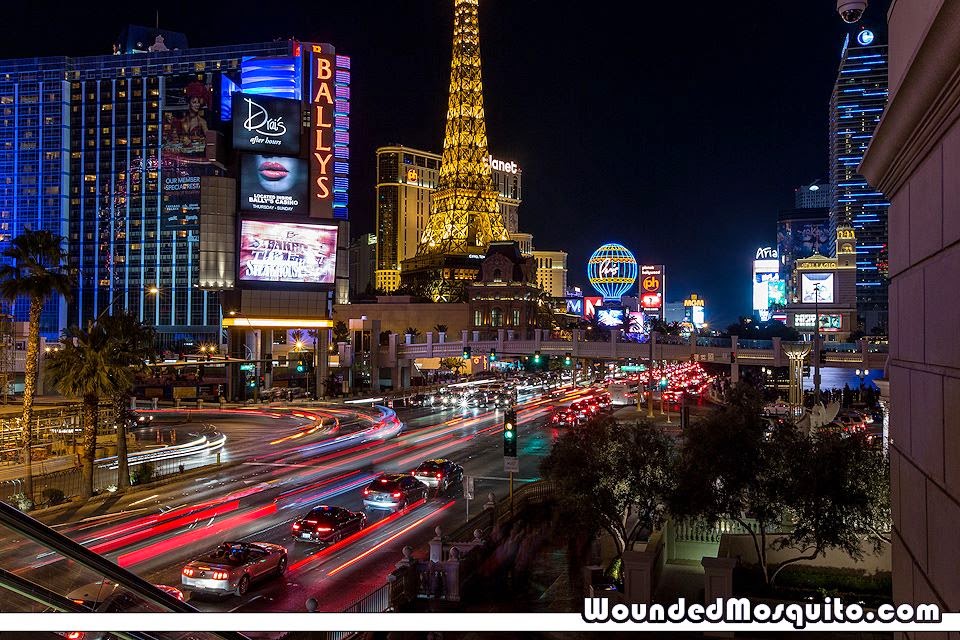 In March I was able to shoot a Utah Jazz basketball game for the first time since 2009. Photographing professional basketball is no easy task, but five years of general shooting experience made a big, big difference. After spending most of my life watching games on TV or from the perspective of the upper bowl of the arena, seeing NBA action at ground level is always fascinating. 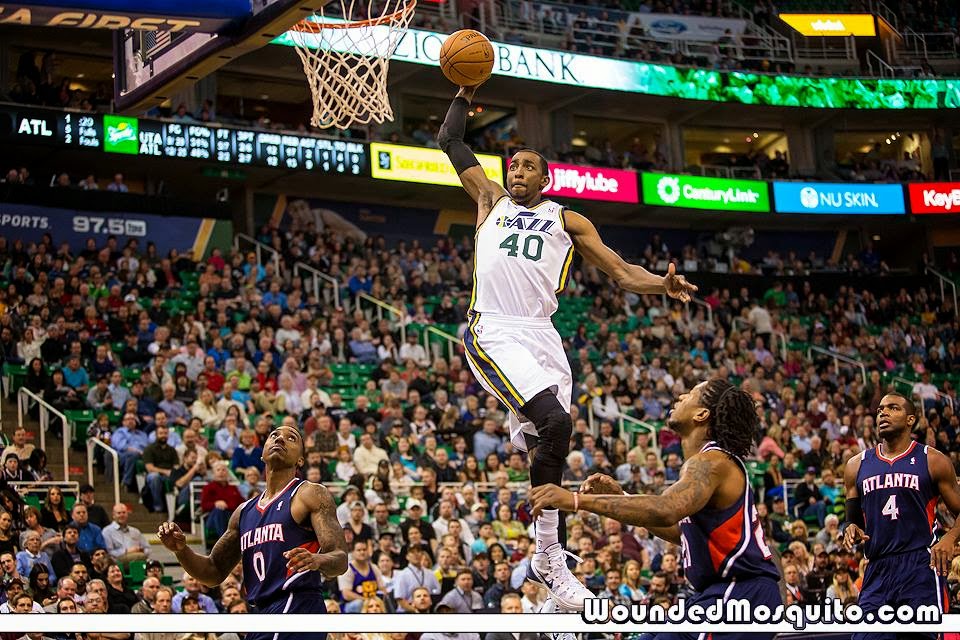 About halfway through the month, during SLCC's Spring Break, I dropped by a Nissan dealer to look at a few used cars. One month and two dozen test drives later, I cleaned out my old 2002 Honda Accord and drove off in a brand-new 2014 Volkswagen GTI. The capstone of negotiations was my offer to stop by Graywhale and buy a CD of my salesman's local band. I finally followed through in December. 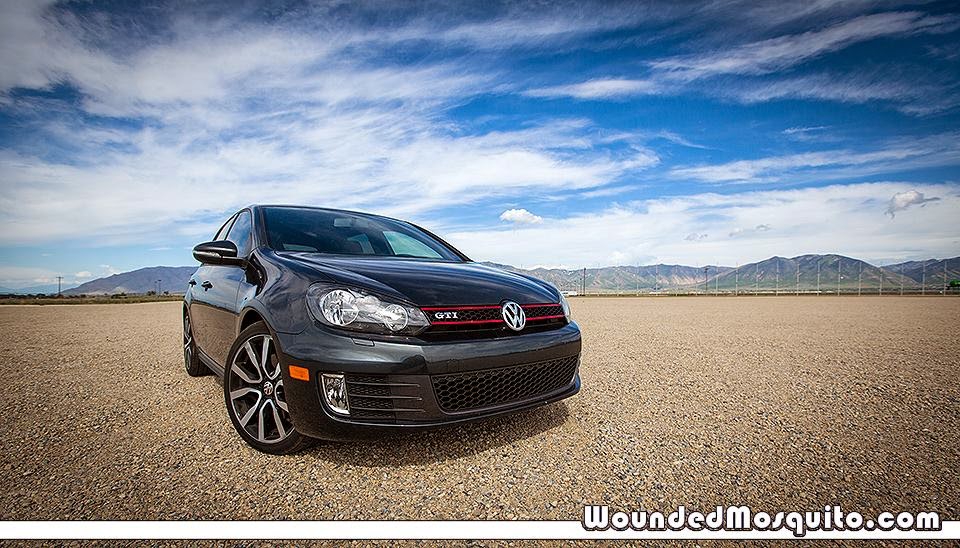 Right around the time I was finishing up my car search, I took a quick weekend trip to Hollywood to appear on "America's Got Talent." It was an odd move for someone who emphatically despises reality television, but back in February I'd appeared in a friend's viral video, and after one absurd thing led to an even more absurd thing, by June I was watching myself get my head slapped around on national TV in front of Howard Stern. The night before our performance, the guys and I took a stroll down Hollywood Boulevard, and I caught this little display:

Once I wrapped up spring semester, I jumped on the chance to break in my new car, and took the GTI on a four-day road trip that covered five national parks, two national monuments, and landed me a $275 speeding ticket in Arizona. By the time I got home, I had well over a thousand landscape images in my camera, including this sunset shot at Delicate Arch: 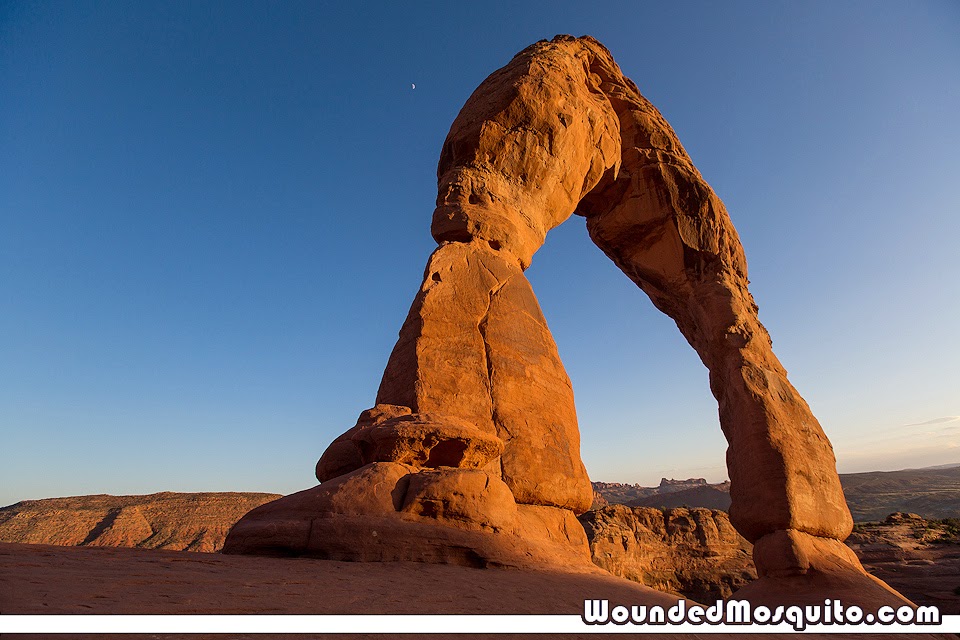 In spite of all the scenic material, my favorite shot has to be an image I caught on the southern rim of The Grand Canyon, as a group of Europeans crashed the amateur photographer's party with a couple of pizzas while we all took in a dramatic sunset. 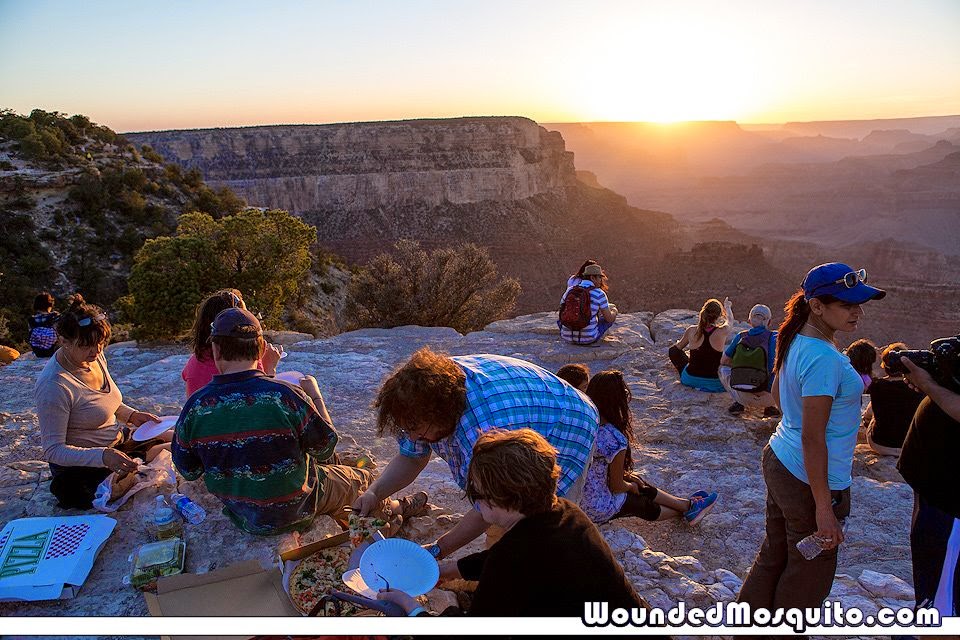 The ironic thing about my 2014 car-buying process was the emphasis I put on features I knew I probably wouldn't use. The inspiration for checking out the GTI came from the numerous times I heard rave reviews for it on BBC America's "Top Gear," a TV show filled with action footage of high-end cars sliding around the dramatic turns of a practice track. Given the cost of the low-profile performance tires on my new car, the last thing I have sought to do is annihilate them, but luckily the boys at June's annual Bountiful Burnout were more willing to lay rubber. 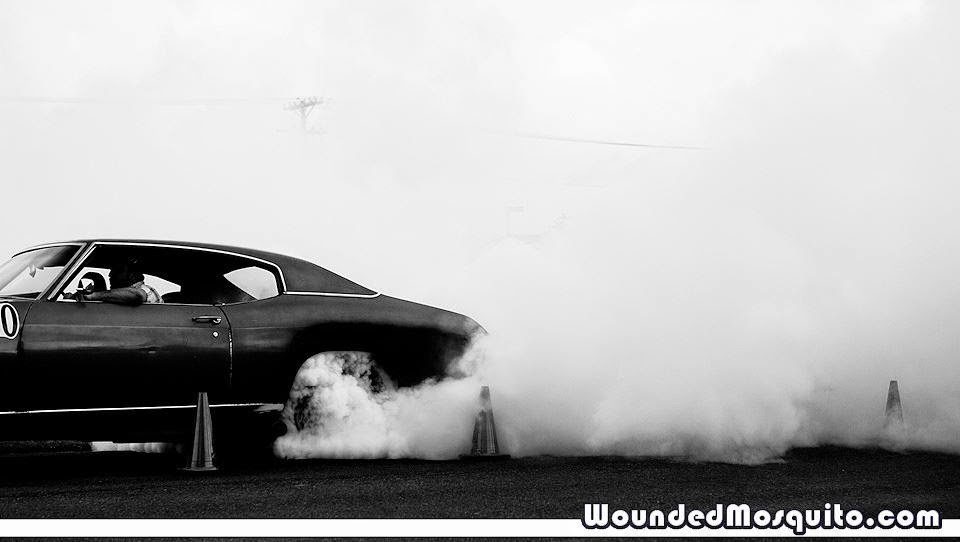 I've gotten sour on shooting parades over the last couple of years. Covering the same parades quickly reveal their repetitive subject matter, and these days it seems like the events have become little more than local business throwing candy at greedy kids. But I still managed to get a few interesting images at this year's Bountiful Days of '47 Parade, such as this shot of Ronald McDonald doing an impression of Richard Nixon for a few local teens. 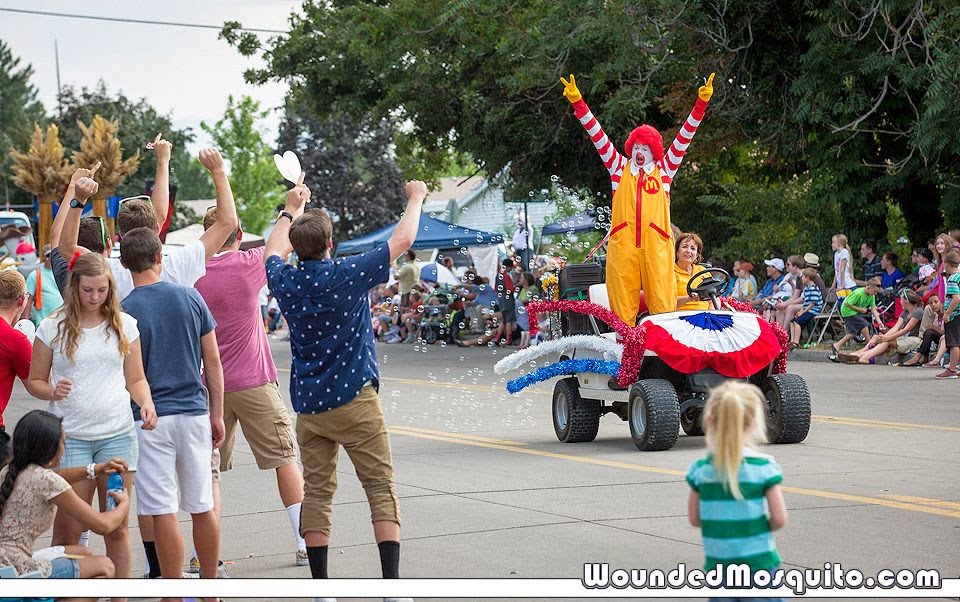 Right after the Bountiful parade, I hustled up the mountain and hiked up behind the Bountiful Temple, acting on a hunch that I might be able to line up the city's most recognizable landmark with the fireworks at Mueller Park Jr. High nearby. 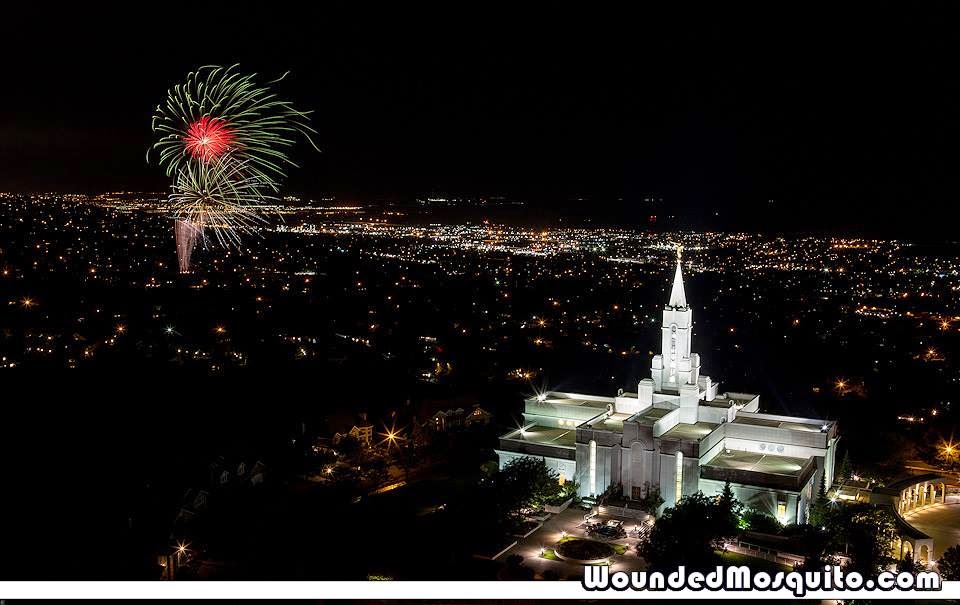 Once my summer classes were wrapped up, I only had a ten-day window before the start of the fall semester, so I had to act fast. The first priority was to make my yearly trek up to Island Park, and this year turned out to be the first time since before my mission that my entire immediate family was up there at the same time. It was also the first trip there for my nieces. We had a great time visiting some old haunts and hanging out at the family cabin, and the day we left, I got up early and made a solo run into the park to catch some early morning mist. 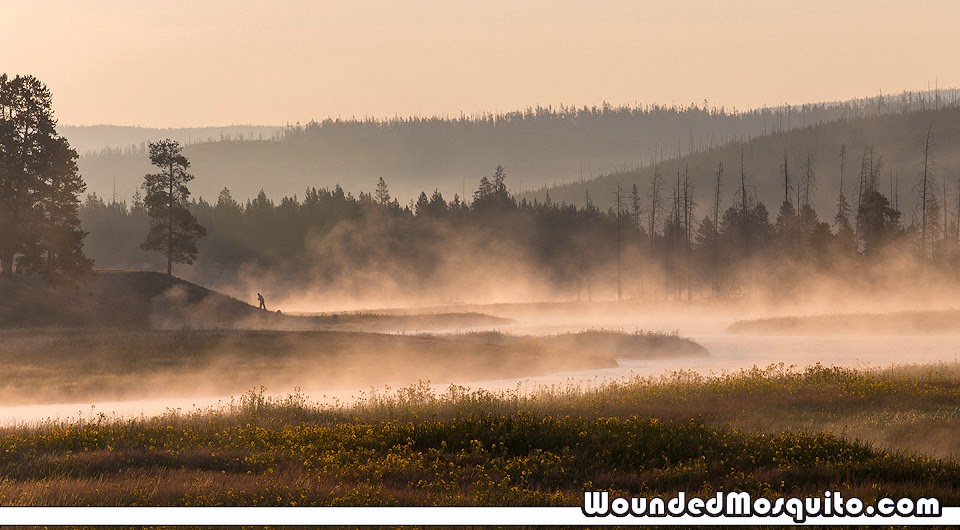 We didn't headline any bowling alley gigs this year, but The Atomic Thunderlips stayed plenty busy, playing a bar in January, a wedding in June, and kicking off the summer concert series for the Springville Public Library. A few days after getting back from Yellowstone, we played a birthday party for Cheetahman's sister, and this happened…

Playing the birthday party also gave me a convenient excuse to skip my 20-year high school reunion, which I'm still not convinced actually took place. But the rash of personal updates that were posted to our class Facebook page in the aftermath of the event triggered enough interest that I might consider attending the next reunion in 30 years or so.

On the afternoon of Thursday, September 4th, a couple of weeks into the new semester, I was driving home from Salt Lake when I got a call from my mom. About twenty minutes later I was standing in the Lakeview Hospital Emergency Room listening to a doctor tell me my father had just died of a heart attack. The rush of support from family and friends that followed quickly turned a long-feared parting into a bittersweet reminder of the meaning behind our mortal existence.

A couple of months earlier, I was taking pictures of my nieces in my sister's backyard when I turned the camera on my dad and told him to smile. When I took a closer look at the results later that day, I was almost hesitant to post the image. This looks like the kind of picture someone posts as a memorial, I thought to myself. It was too late for a Father's Day post, but I went ahead and posted it anyway. 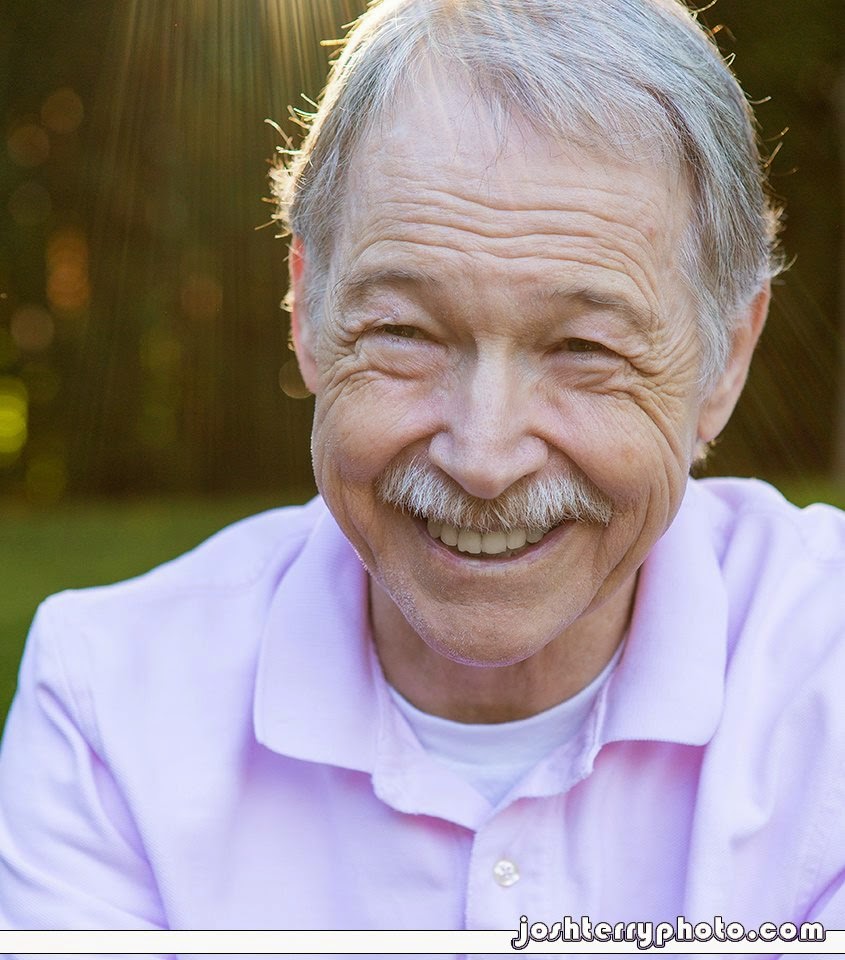 Sure enough, the following September, we used the shot for his obituary, as well as the funeral and viewing. I had to shake my head at the element of foreshadowing in the whole sequence, but I am infinitely grateful to have caught the image.

The day after he died, I decided to follow through on my plan to attend the Salt Lake Comic Con, hoping a little distraction might be good for me. I would up spending about half the day wandering around the Salt Palace taking pictures of diehard fans dressed to their geeky nines and wondering why Bruce Campbell couldn't just show up and sign an 8X10 for me so I could move on to more important things back home. Bruce never showed, but I did manage to shoot a bunch of tag-team wrestlers I found performing on the conference floor. I can't help but think my dad would have been amused at the situation: he wrestled in high school. Everything that happened in the wake of Dad's death took on a different tone for the rest of the year. Not so much because I was angry or depressed or confused about what was happening. Rather because the weight of the experience made everything else--social life, pop culture, job issues--seem painfully insignificant. I mentioned before that I've penned several drafts of potential blog posts in the last few months, but next to what I wrote about my dad in September, they almost seem silly.

Silly or not, life had to move on. A couple of weeks into September I stopped by the Utah State Fair and learned that one of my submissions took First Place within its division. The Fair Theme was "Greatest Hits," so I entered a favorite shot from a concert shoot I did last year at The Depot in downtown SLC. I called it "Gibson + Hair = Rock." 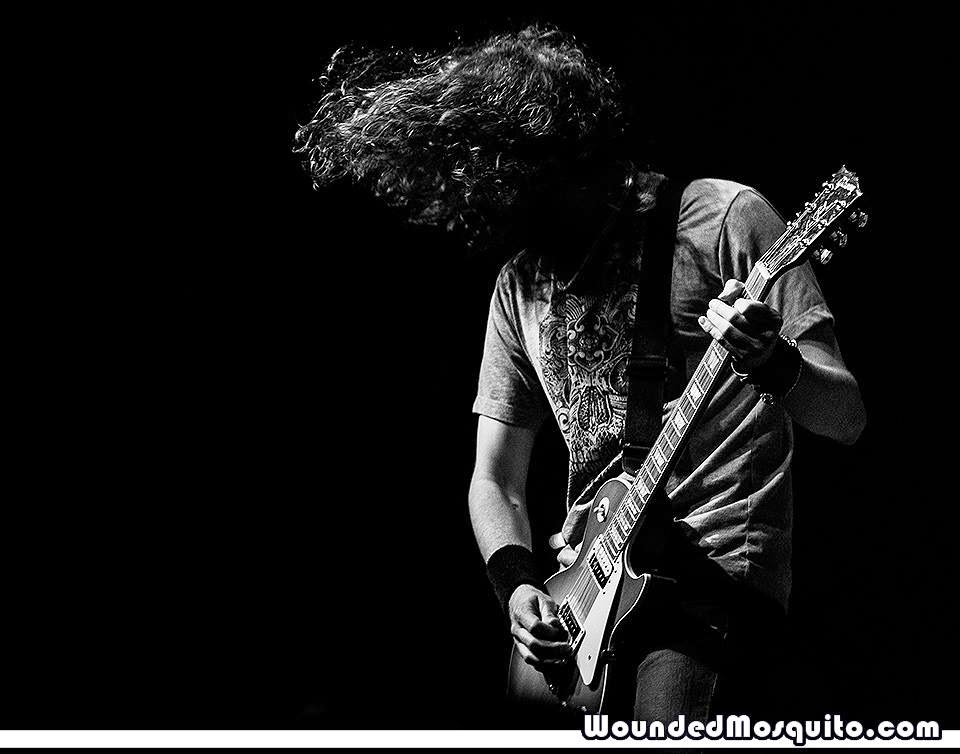 Throughout the year I was also able to do a number of formal portrait sessions, which means a lot in Utah. Around here, everyone has a dozen different friends and family members they can choose from, so when someone tags me for the job, my heart and my wallet are extremely grateful.

But of all my subjects, my favorites are always predictable. Neither of my nieces were especially excited to be taking family pictures out at Wheeler Farm this past Halloween, but I managed to get one shot that my sister can use as consolation when they are at each other's throats in the coming years: 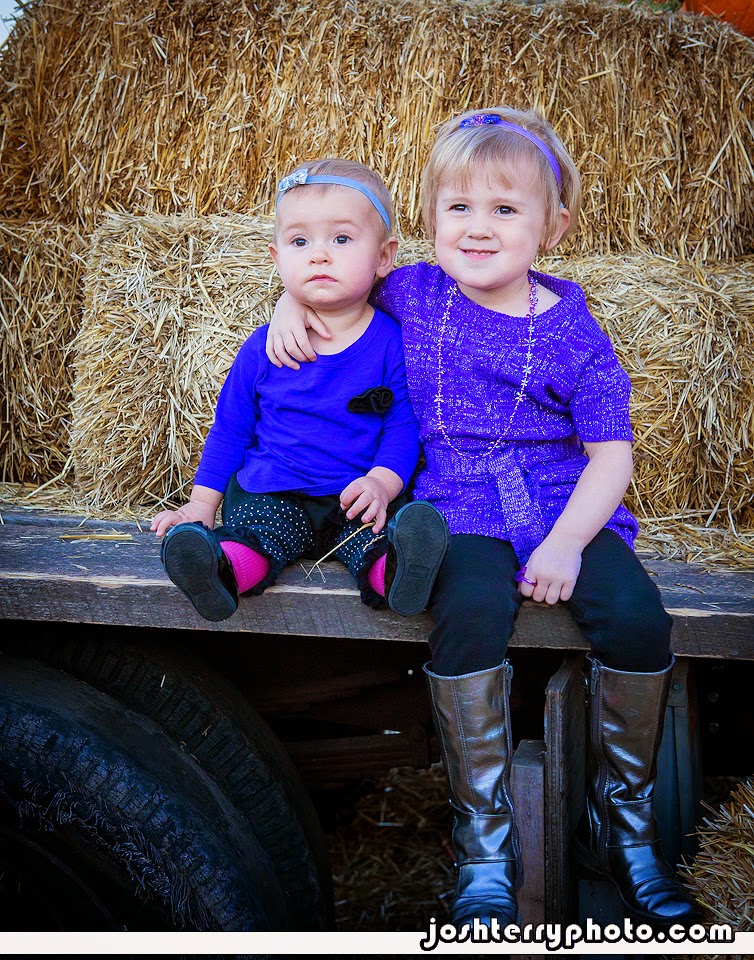 As the holidays arrived, my family knew things would feel a bit off, so we tried to come up with a few new traditions to liven things up. On the Saturday before Christmas, a few of us went up to the Bountiful Temple, and I was able to go through for one of my great-grandfathers, which was very cool. In the middle of the shopping and the end-of-semester grading and the usual chaos, I stopped by a couple of area temples to take some night pictures, and came up with some fun results. 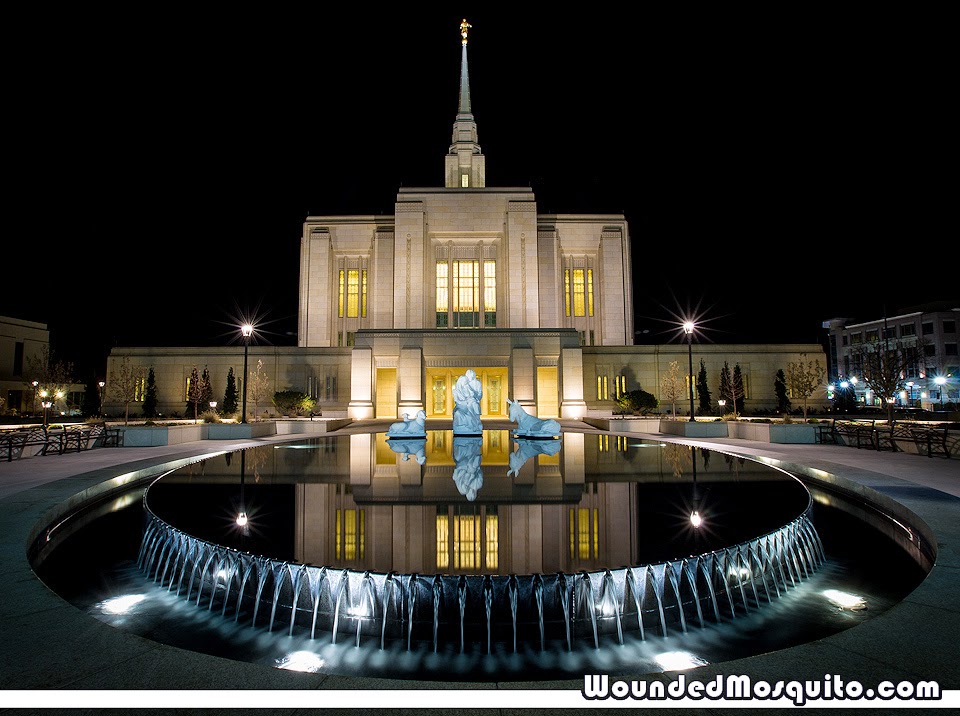 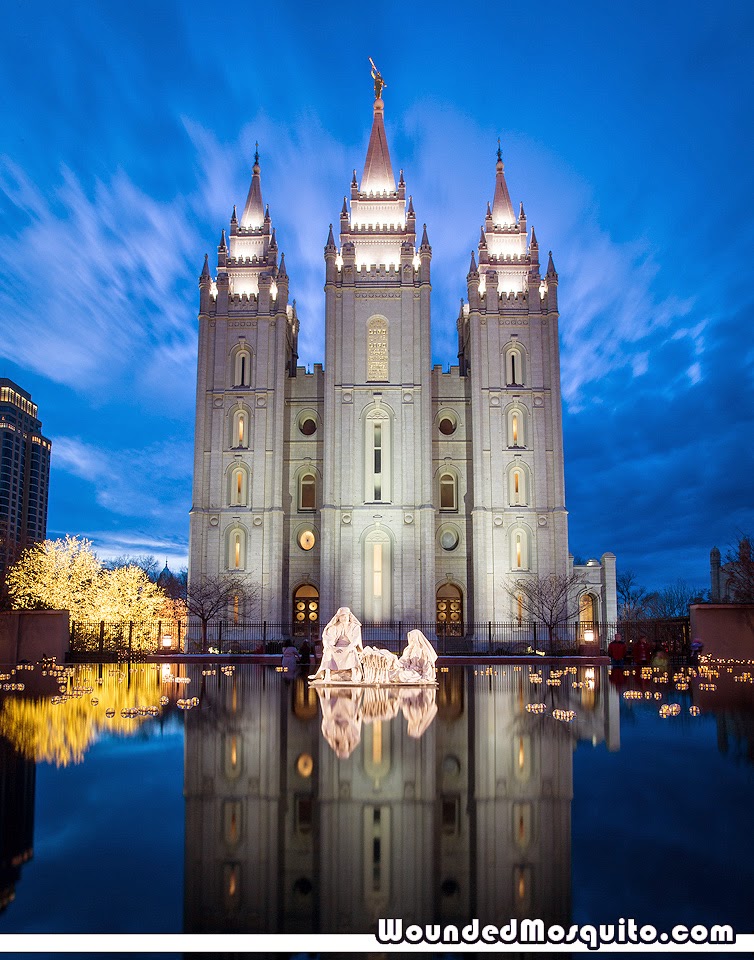 For Christmas itself, my mom and I stayed over at my sister's house, which meant we were on hand for the big morning event with my nieces. Chaos may have ruled in the living room, but outside the first legit snowfall of the season came just in time to make a White Christmas.

2014 will always be marked as the year my dad died, but it was also a year that was full of blessings and opportunities. In fact, his death only served to remind me of blessings I've enjoyed my entire life, and will continue to enjoy in the future. My experience this Christmas echoed what I encountered while preparing for Dad's funeral: often the process and the logistics and the to-do lists and the formalities leave you wondering when you will actually have the chance to step back and appreciate the point behind everything you are doing. A recent church video underscored this idea quite well.

It's easy to tell yourself that, "once I take care of X, I can sit back and enjoy Y," but when the Xs keep coming, eventually you realize that you just have to make time for Y. That's probably one of the biggest reasons my family was able to cope with Dad's death. Over the years we've made plenty of time for Y. 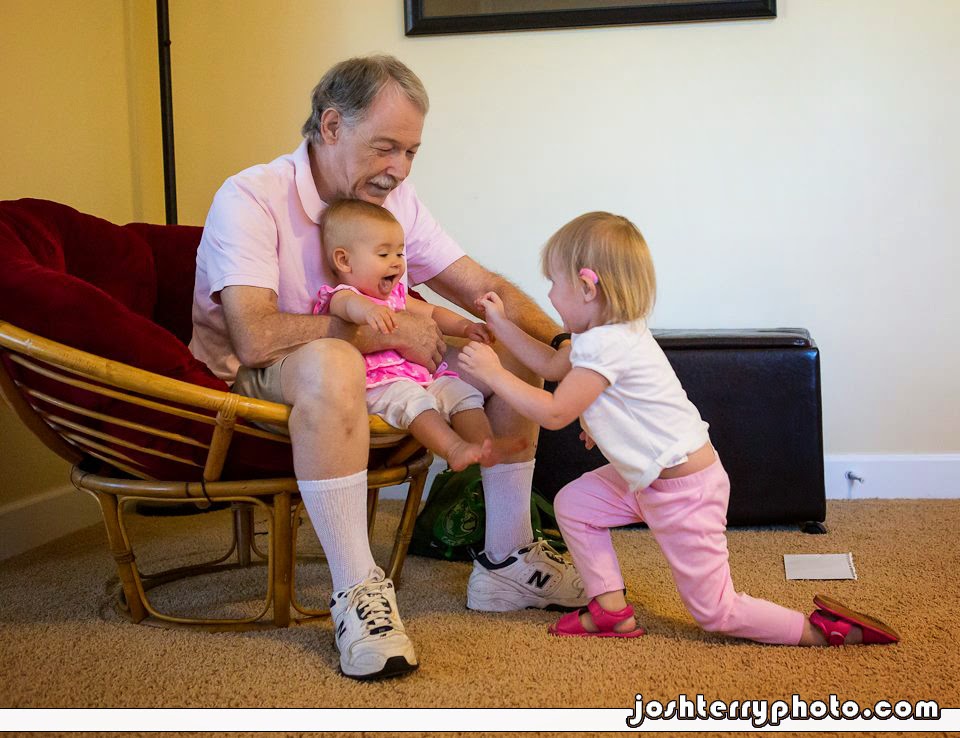