Ok, so ever since I wrote up the Starting Five for Soul Men, I’ve been thinking about the Funk list. I didn’t really have to come up with any rules this time, since I could pretty much stick to artists who emerged in the 70’s and beyond (sort of). Anyway, Funk is universal, baby. Enjoy.

Point Guard: James Brown
Evidence: The Payback, Sex Machine, The Live in Olympia Paris album, and the fact that I own the James Brown Christmas album

I debated for a while about which position to slide Mr. Dynamite into. I was thinking that as the Michael Jordan of Funk, he’d be a natural shooting guard. Then I remembered the stories of JB fining members of his own band for missing notes in concert, and I realized that even if he was playing a pickup game with Magic Johnson, The Hardest Working Man in Show Business would be running the point. No contest. 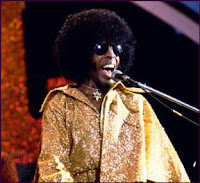 Shooting Guard: Sly Stone
Evidence: I Want to Take You Higher, If You Want Me to Stay, Hot Fun in the Summertime

Sly’s career with The Family Stone didn’t quite last a decade, thanks to drug abuse and general weirdness (though I guess you could say that about pretty much any act in the 70’s), but those years were something else, man. From the outfits to the bass lines to the positive socially conscious lyrics, Sly truly took you higher. Seems like a good choice for the wing.

Like I said in the Soul Men article, it’s kind of hard to justify sticking Stevie Wonder in any category other than “category for artists who don’t belong in any category”, but as you will see in the clip below, there is really no way I wouldn’t have this guy on the team. Besides, as the king of versatility, Wonder is a natural Funk foil to Andrei Kirilenko, the weakside “do-it-all” small forward for the Utah Jazz. 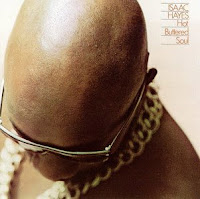 Why put Isaac Hayes in the low post? Well…he did record the “Shaft” soundtrack and almost single-handedly launch the Blaxploitation thing. He also did a killer cover of “Walk On By” that has to be heard to believed. But most of all I’d like to include Mr. Hayes for the album cover to “Hot Buttered Soul”. Because if you can put out a cover like that and not wind up in one of those joke e-mails that sends all the photos of the creepy albums, you are a baaaaaad mutha— 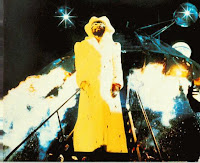 Ok, so we’ve got James Brown running the point, Isaac Hayes down low, and Sly Stone and Stevie Wonder causing havoc on the weak side. Who should we put in the middle? Hey, how about that guy that used to descend out of a huge spaceship on stage wearing a floor-length mink coat? Sounds good to me. Welcome aboard the Mothership Connection, George. We’re glad to have you.

Sixth Man: Flea
Evidence: Higher Ground, Give it Away, Can’t Stop
It took me a while to really get into the Red Hot Chili Peppers (and I surely have), but even early on I recognized something special about Flea. Kind of a “wiry bald guy that likes to jump around the stage and do funny things with socks” kind of special, I guess. To each his own.

Want to know why he’s only the sixth man? He’s a Laker fan.

(Side note: as an example of team unity, Flea’s YouTube clip is a Chili Pepper’s cover of a Stevie Wonder classic.)