Carrie Fisher is the Center of the Universe

Last week I dropped by the Davis County Library to check out some new reading material, and picked up a copy of Carrie Fisher's recent memoir, "Wishful Drinking." It was a pretty eye-opening account of a woman born to a pair of 1950's Hollywood celebrities who went on to deal with substance abuse, manic depression, and the eternal burden of an iron bikini. 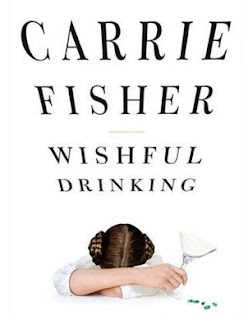 I finished the book by the end of the day. The next day, her celebrity father died.

I don't think there was a connection.

What was even stranger, though, was realizing just how central a role Carrie Fisher has played in my pop culture universe:

The first "Star Wars" film came out six months after I was born, and I spent the first ten years of my life wanting to be Han Solo when I grew up.  While I never quite developed the same crush on Princess Leia as some of my fellow peer-nerds, that infamous gold bikini from "Return of the Jedi" might explain why I never went through that early childhood phase where boys think girls have cooties.  Not that it helped any.

If "Star Wars" is the keystone of my appreciation of science fiction, "The Blues Brothers" is the keystone of my appreciation for comedy. When I was a kid, "The Blues Brothers" was that cool movie on cable where they have a car chase in a mall. In high school, it became the foundation for my deep appreciation for soul and blues music. By the time I left on an LDS mission to Chicago, the film had a flat-out divine import. A mission from God, indeed.

Before "The Blues Brothers" solidified my R&B roots, my parents raised me on a steady diet of Motown and Simon & Garfunkel. To this day, "Mrs. Robinson" instantly links me to memories of our family Honda weaving through Douglas Fir trees in Yellowstone National Park, even though the song itself was written in Greenwich Village, New York. I still maintain that Paul Simon is the greatest songwriter of the late 20th Century (even though he truly needed Garfunkel to bring his best stuff to fruition). Carrie Fisher would probably agree with me.

Moreover, Ms. Fisher is an accomplished writer (four other novels to date) and stage performer (the memoir was adapted from a live comic performance she used to do...or may still do.  I don't know, the book came out two years ago.)  With all those different interests, Carrie Fisher, like Steve Martin and Woody Allen, is nothing more than a considerably more successful version of me.

Yep, that pretty much says it.
Posted by The Professor at 7:57 AM

Further On Up the Road: 2010 Epic Summer Film

For anyone who wasn't able to make it out to Sugarhouse Park last weekend, here is my submission for the 2010 Epic Summer Film Festival, "Further On Up the Road:"

Unlike my previous Epic Summer submissions, I didn't go for the mockumentary this time. This piece is more an attempt to tie together the different interests I was pursuing over the summer, and pull out some kind of common theme. Near as I can tell, the common theme was Rock and Roll. From the band I played in to the bands I photographed to the road trips I took, music seemed to play a dominant role in the experience, much more so than humor, anyway.

A number of people thought I should have identified all the locations in the photos and video clips in the film. Since I didn't, I'll list some of them below:


If anyone has a specific question about any of the images or clips, feel free to leave a comment.
Posted by The Professor at 4:14 PM

Some of my favorite moments in life are the ones you never see coming. Not that they are particularly great or wonderful, just that they are so far from anything you expected when you woke up that morning.

Last Wednesday night, about 10:30PM, I was standing with my buddy Chidsey on the west end of Rio Tinto Stadium in section 17 under a full moon as KISS blasted out the chords to "God Gave Rock and Roll to You" on a brilliantly-lit stage fifty yards away.

This moment is improbable for several reasons, including:

1. I am not a KISS fan.
2. As recently as 4:37PM that afternoon, I had no knowledge of KISS's plans to play a concert in Sandy, Utah that evening (let alone any intention of attending).

Yet, the moment came together. Somebody gave Chidsey a couple of extra tickets to the concert, and Chidsey gave me a call at the precise moment when spending an evening watching four middle-aged men in stage makeup rock out to a collection of innuendo-driven 1970's anthems like "Love Gun" sounded like a perfect idea.

So after two hours and 20 tracks of exposure to the full KISS experience, I still can't quite call myself a fan, much less a full-fledged member of the KISS Army. But I have a much better idea of why the Army digs them so much. Why they get dressed up to go to their concerts. Why they go crazy when the automated stage lifts the drummer's kit forty feet in the air and shoots steam out the bottom to make it look like it's about to blast off into the stratosphere. 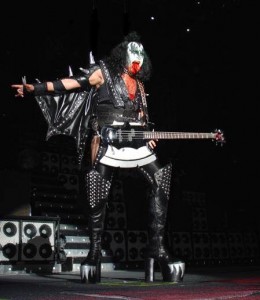 Something about those old guys in eight-inch platform boots is pretty fun. Something about them bringing some veterans on stage to present an oversized donation check, then leading us in the Pledge of Allegiance while guitarist Tommy Thayer waves a fifteen-foot American flag is kind of cool. And something about lead singer and "Star Child" Paul Stanley repeatedly referencing the band's new album "Sonic Boom" and how you can get it exclusively at Walmart reminds me that even though we all like to take rock and roll seriously, we really shouldn't.  Especially when a harness lifts 61-year-old Gene Simmons to the top of the stage scaffolding so he can spit blood and play his axe-shaped bass guitar at us from fifty feet in the air.

Almost, thou persuadest me to be a KISS fan...

I'm still not much of a fan of KISS's music. But last night I became a big fan of the KISS Experience.
Posted by The Professor at 10:10 AM

Tomorrow night I will be participating in my fourth Epic Summer Film Festival up in Sugarhouse Park.  It's an annual event where a bunch of laid-back folks hang out and watch amateur films about outdoor adventure and humanitarian efforts.  Very cool vibe.  A buddy of mine turned me on to the event four years ago after we hiked The Subway together, and I've been a participant in the festival ever since.

This year's submission, "Further On Up the Road," is probably the most "epic" of my films so far, in this case attempting to capture the events of an entire season instead of a single hike or road trip.  Even so, at the end of the editing day, some pieces don't quite fit into the final product.  One of my favorite things about the summer season is making fresh salsa, and I put the following sequence together in the hopes of working it into the film.

As much as I love fresh salsa, I couldn't find a good way to work this footage into the final film logically.  But I don't want it to go to waste, and I'm kind of bummed about summer being over, so here you go.  If you love fresh salsa, it is kind of fun to watch.

Last night I had a dream that I was attacked by a giant squid that was in my refrigerator.  The details are kind of sketchy--where's an "Inception"-like architect when you need one?--but I seem to remember the squid was left over from a sequence in "Raiders of the Lost Ark" that Steven Spielberg planned but never filmed.  There was also some kind of connection to Sam Elliot playing a truck driver.

On a related note, my band is making its debut performance tonight at the Layton Amphitheater.  I plan to check the place for hidden squid before I take the stage.

That is all.
Posted by The Professor at 8:21 AM