On behalf of the zombies...

Today's post comes in response to a recent comment from loyal Wounded Mosquito reader Doug, aka "The Jeepcruzer," who writes in regard to my early May analysis of the 1989 remake of George Romero's "Night of the Living Dead":

"Eek - Night of the living dead? UR killing me man. Shawn of The Dead is the only zombie movie I've ever enjoyed. Extrapolate as you will."

Thanks for writing in, Doug. I always appreciate your input and challenging rhetoric, even though I still remain disappointed that you carry such a deep-rooted hatred for "ET." Perhaps we can find more of an intellectual harmony on the zombie front.

Let me first say that I am also a big fan of "Shaun of the Dead." Great movie, great satire. A spot-on jab at the inherent absurdity of not only zombie movies, but most horror movies in general. "Shaun" is definitely the "Airplane" of horror movies.

That being said, I think that non-satiric zombie movies still have a lot of value, at least in the case of the original "Night of the Living Dead," and "28 Days Later" as well. And I'm not talking about the subtle social commentary that underlies the mindless hordes of the undead, either. I'm talking about a pure moviemaking value.

When most people think of "Night of the Living Dead," they think of a brainless horror flick where stupid protagonists struggle to outrun comically slow antagonists. They also tend to pin it in the category of dumb slasher-flick horror like the "Friday the 13th" or "Halloween" movies, little more than a series of brutal slayings with really bad acting and even worse writing.

I submit that "Night of the Living Dead" may bear some of those campy stereotypical horror elements, but that it uses them to strategic effect, ultimately transcending them and locating itself in the category of intellectual horror alongside classics like "Psycho." The first thirty minutes of "Night of the Living Dead" has plenty of eye-rolling moments, most of which take place in the first sequence as one of the silver screen's all-time ditzy blondes fumbles her way out of the desperate clutches of a lanky fellow in a torn suit and a lot of eye makeup. But stick with it. The brilliance of Romero's initial zombie movie is that it starts campy and proceeds to get darker and darker until you're staring at the screen stunned, wondering what happened to the cheesy little movie you started with. It doesn't matter if you're watching it with a group of friends or on your own at 1AM in your parents' basement (which is the way I saw it the first time). "Night of the Living Dead" is a scary movie. 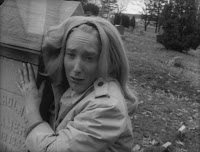 There are plenty of "gross" moments that no doubt helped pave the way for the over-the-top gore of future slasher films-the scene where the zombies raid the burning pickup truck after two victims make an unsuccessful getaway attempt is a doozy-but unlike its more explicit progeny, the gore of "Night of the Living Dead" is partially concealed by its grainy black-and-white film quality, which makes it extremely claustrophobic and much, much scarier.

Over 30 years down the road, "28 Days Later" upped the ante by asking a simple question: what if the zombies were fast? What came out of that answer was one of my all-time favorite horror movies. (Incidentally, many critics hate the third act and feel the film falls apart; I, on the contrary, think it's a fantastic ending that reinforces the whole "enemy is us" point.)

All of this is not meant to deny the fact that generally zombie movies are campy schlock-fests. Not at all. What I'm saying is that just like in most cases (see "Rocky" and "Jaws", for two perfect examples), the sequels have undermined the brilliance of the original. If you haven't seen the original, Doug, you must see it now. And if you have seen it, you must see it again. Because I'm right about this.