I have one iconic memory of my mother from the summer of 1983. I was sitting in the back seat of our maroon Honda Accord when my dad pulled off to the side of the road in front of the Center Theater in Salt Lake City. My mom stepped out of the passenger seat onto the sidewalk and turned to me.

"Come on," she said excitedly.

I couldn't believe it. We were going to go see "Return of the Jedi." Again. It was awesome. My parents hadn't said a thing about it, and I couldn't have been more surprised.

What isn't surprising is how much of my pop culture upbringing is due to my mom, especially when you consider that she went into labor with me while watching Steve Martin's debut as host of Saturday Night Live. My mom did all the standard stuff: she washed my Han Solo Underoos, made my tacos and vacuumed my Cheeto crumbs off our shag carpets, but she also introduced me to Motown and Aretha Franklin. Star Wars and SCTV. When I sat in front of the family stereo making my first mix tape in the fourth grade, it was her collection of Beatles albums I was pilfering. And if it wasn't for her, I wouldn't have known what was so funny when Rob Nish played the "Monty Python's Flying Circus" theme in Sacrament Meeting.

My parents worked together as a perfect pop culture team. My dad gave me a love of the open road, and my mom provided the soundtrack to cruise it by. Some of my favorite memories as a kid were of sitting in the back seat of our Honda at night, facing the green glow of the dashboard as Billy Joel's "The Stranger" played out of our cassette deck. It wasn't until much later that I understood how much of a sacrifice my mom made to come out to Utah and leave her whole family back on the opposite end of the country. It wasn't until later that I understood how growing up in the Cleveland projects gave her an appreciation of everything good in life.

It might have been the projects that made my mission such a challenge. It seemed like every time a phone call-approved holiday rolled around when I was in Illinois, I'd be serving in some dangerous area like Joliet or South Chicago, and would have to come up with a strategic answer for the inevitable question:

"So do you live in a safe neighborhood?"

"It's fine" was about the best I could come up with, praying that she couldn't hear the gunshots in the distance from her end of the line.

That was actually one of the only times I've ever felt like I couldn't tell my mom everything. That's always been one of her best qualities: no matter what I have on my mind, no matter how troubling, I can always toss it out for discussion. That's how I wound up sitting on my stairs late at night as a seven-year-old discussing the concept of eternity while my parents wondered if I was just trying to avoid going to bed. Then a few years after that, during a summer trip to Island Park between the fifth and sixth grade, I felt a sudden surge of guilt and began confessing all my adolescent sins from the back seat of the car. To her credit, she never judged me for anything I'd done, then or now. Neither did my dad.

For Mother's Day this year I picked her up the fifth season of "X-Files," the one with her favorite episode about the small town full of vampires. That was the season that was underway when I came back from Chicago and found two years worth of "X-Files" and "Simpsons" episodes on VHS waiting for me to catch up.

My mom may have spent a lot of time worrying when I was on the South Side, and she may or may not have tried to call my mission president and yell at him when he decided to leave me there for six months instead of four in the summer of '97, but her concern for her son should never have been confused with concern for her testimony. She joined the LDS church in 1972, while in her early 20's, the sole member of her family to embark on a lonely path. I've always wondered how I would have reacted to the story of Joseph Smith if I hadn't grown up in the Mormon Heartland, if I had to come in from the outside.

With my mom, I've never had to wonder. 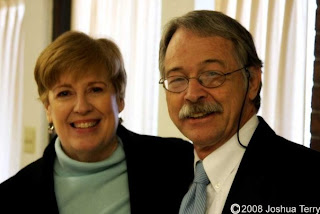 Posted by The Professor at 9:09 AM