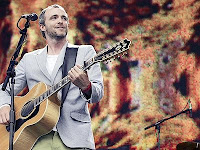 Almost a month after seeing them at The Depot, Travis is still stuck in my head. Sometimes it's "My Eyes", sometimes it's "Closer". Right now it's "Why Does it Always Rain On Me", the song we all did the pogo to for the last chorus. Part of this is because I was only familiar with a few of their songs before going to the show, and some of these new finds have been a part of my regular iTunes rotation in the time since. But a bigger part of me thinks that the reason their music has stuck is because of its good vibe. Francis Healy and his mates had a very genuine connection with the crowd, and not in a Rock Idol kind of way. They sincerely seemed to be having fun, and genuinely seemed to be concerned that we were too. That concern was reflected in the music, and that is why I've decided to make Travis a charter member in my Good Vibes Brotherhood.

From here out, the GVB will represent bands and/or singers who not only produce music that is cool, fun, or innovative, but primarily music that generates, as Brian Wilson might have put it-and Charles Manson, depending on whether you believe the story that he co-wrote the song-"Good Vibrations."

Membership in the GVB will expand to include future finds as well as to bring in past classics, but for now the charter class will include Travis, Jonathan Richman, and Ray LaMontagne. Feel free to submit nominees for GVB inclusion, but don't be disappointed if I don't add them right away. The best way to sell me on a GVB act is to get me to one of their concerts, but since I'm guessing certain future inductees are already dead, that doesn't have to always be the case. The bottom line is that these are bands that make you feel good when you listen to them, and make you feel like you've joined a hippie commune when you go see them. Or at least that you've become part of an exclusive clothing-optional club. Or...well, I think you get the point.

Here are the inductees: