I made my friend Steve do a lot of embarrassing things when we were kids. There was the time I was pretending to be The Emperor from “Return of the Jedi”, and I made him roll around on the ground like he was Luke Skywalker, howling for his daddy while I shot him with imaginary lightning bolts. When “Star Wars” got boring, we played “The Actors”, meaning he was Mark Hamill and I was Harrison Ford. We always had to have imaginary girlfriends, but since we both had a crush on the same girl from our second grade class, I called dibs on Shelbi and demanded that Steve make do with her lesser imaginary twin named “Shelly”. Steve’s married with three little daughters and living in Vegas, now, so I guess his dues paid off.

Somewhere around the fourth grade, I enlisted Steve in another of my delusional ventures. Thanks to my mother’s record collection, I had become obsessed with The Beatles, even while most of my friends were listening to Def Leppard and watching the WWF. Any stroll through our household in the late 80’s would be guaranteed to feature a constant stream of tunes from Revolver, Rubber Soul, or Help!

But listening to John, Paul, George and Ringo wasn’t enough. In my mania, I sought to re-create the Beatle experience as close to fourth-grade reality as possible. That’s why if you were to wander into my basement, you might discover two youngsters standing around strumming tennis rackets while lip-synching “I Wanna Hold Your Hand” into the handle of our vacuum cleaner. The random pile of boxes, crates and barrels behind us was supposed to be a drum kit. 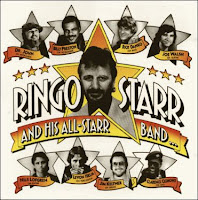 Years later I actually got to see one of the Beatles in the flesh, when Ringo came to Weber State University with his All-Starr Band. Seeing a real Beatle was incredible, but the pure, raw energy of the live experience left me with a much more important conviction: I had to play in a band.

Without the benefit of years of disciplined study, my musical options were pretty limited. Six years of piano lessons had bottomed out when I decided to put my focus on Boy Scouts and Church Basketball, and the guitar my parents scored me in the fifth grade drew even less attention. But the drums…the drums I could handle. After a couple of unofficial lessons from a local drum guru named Randall Edwards, I was competent enough to hold a steady beat, as long as it never strayed outside of basic 4/4 time. And when my buddy Breto thrifted a secondhand kit off the Deseret Industries dock for $25, my first band was born. 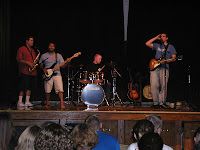 Thus began one of my favorite pastimes. Over the next nine years, whether jamming in Breto’s parent’s basement, pinch-hitting for a Neil Diamond cover band at the USU Valentine’s Dance, or performing an electric cover of “If You Could Hie to Kolob” for a Stake Film Festival, I’ve had several chances to pull out the drums and make like a rock and roll star. Most of my bands never lasted past a single gig, and it never really helped with my dating life, but it was still enough to quench the inner rocker, to get the live fix I needed.

Most of these spots came at ward talent shows. That was where Breto and I first debuted Zebedee Coltrane, and I played with a pair of bands at a Logan talent show four years later. Two years ago I came full-circle and got together with a couple of friends for the University 32nd Ward FHE Freak Show and played a cover set that featured “Back in the USSR” off the Beatles’ White Album. We called ourselves The Tony Danza Experience.

Then about a month ago I got word the U32 was holding another show, and I had a perfect excuse to get another band together. When the recruiting dust settled, I joined a songwriter named Greg Smith and a Chicago native named Dan Carlson to form a power trio titled The Last Starfighters.

We didn’t have a bass player, but we did have a PA, and when we really played loud you couldn’t really tell we had no bass line anyway. Through three or four rehearsals I rediscovered why playing in a band was so much fun, and last weekend we took the stage to play a trio of songs no one had ever heard before.

We didn’t care. We just wanted to play real loud.

And that we did. After blasting out “Ultimatum”, the first of Greg’s three originals, I cracked my sticks right into “Antipathy”, and when Dan refused to stop playing, we rolled right into “Money” just for the heck of it. I even played my first public drum solo. We rocked loud and we rocked hard, with Dan jumping and strutting all over the stage (and even pulling out the old Eddie Van Halen neck tap) and Greg screaming into the microphone to be heard over all our racket. I pounded away at the skins, slowly letting my nervousness ebb into confidence, and my serious glare transform into a gleeful smirk. When we finished, I stood and saluted the audience, unsure of whether they were entertained or getting ready to throw their chairs onto the stage.

“I feel like I just got away with something,” I told Dan.

For about an hour I felt like a real rock star, only without the drugs, the money, and the women. Most people didn’t know I was a hack drummer, so it was fun to show a new side to the repertoire, just like when I won the chili cook-off. I even videotaped our performance so I could stick it on YouTube and play it over and over again ad nauseum.

Speaking of which, here’s “Ultimatum”:

I’m not sure I’ll ever go on tour. I may never put a CD on the charts. I did get an offer to join one of my students out on the Duchesne bar circuit, but I didn’t feel like driving out to the Uintah Basin every weekend. Truth is, I’m pretty happy playing now and again, rocking in the basement for a bit, then dragging the kit onto a stage every once in a blue moon. Ringo’s probably never going to call me up to join one of his All-Starr bands, but at least I’ve been able to get a little taste of what he gets to experience.

Just without the drugs. And the women. And the money. 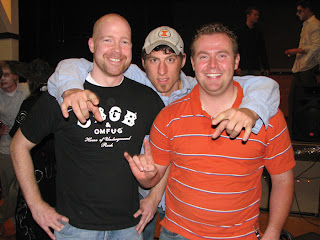 Posted by The Professor at 4:49 PM