Start the revolution without me

Last night I got a bit of a shock during my weekly English 1010 broadcast: one of my students showed up for class.

He didn’t show up to his classroom in Logan, where my stunning visage is broadcast to he and his twenty-odd classmates every Wednesday night. He showed up to MY room, in Salt Lake, where my course is originated. It was the first face-to-face contact I’ve had with a student this semester and, in all likelihood, will also be the last.

It was yet another reminder of why I have a tough time with distance education. I appreciate the advent of educational technology, and the access it gives students who live in rural areas who still want a college education. And I certainly appreciate the opportunity to make money and pay my bills.

But when you add up all the pros and cons, and divide the total with a healthy dose of honesty, I’m still not a fan of distance ed courses. I’ve taught both online and via satellite, and neither comes close to the experience of teaching in the midst of twenty real live human beings.

From the fall of 2002 to the spring of 2004, I taught English 1010 and 2010 on campus while I was going to grad school in Utah State University’s American Studies Program. For two years I wandered the campus, teaching basic composition courses wherever the English Department could find room for me, whether that was in the library, the rec center, or even in a dorm at one point.

After I graduated, I spent three semesters with Salt Lake Community College, doing much the same thing at several of their Salt Lake area campuses. My nomadic existence continued, in science labs and even in a strip mall, but always on a face-to-face basis. 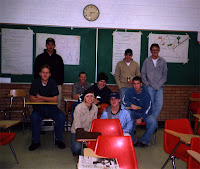 Through this experience, I forged several long-term friendships, getting to know my students while interacting in class or while catching up in my office on off-days. I even wound up playing in a band with one of my first students, and stayed in touch with him throughout his LDS mission to England and subsequent marriage a year after he got home.

I left SLCC two years ago to return to my Aggie roots, this time as an adjunct for the University’s extension program for local firefighters. For two years I hung out at the West Jordan Fire Station with a dozen of Salt Lake Valley’s finest, talking English and making many more friends. It was very cool to take one of the few redeeming jobs I’ve ever had and combine it with a truly redeeming element of our workforce. More than ever, I felt like I embodied the role of blue-collar academic.

Then last spring, around the time the higher-ups at USU were deciding they didn’t want to continue the firefighter program, I shifted over and started doing the broadcast courses. Instead of pacing in front of two-dozen warm bodies, I was sitting at a desk in front of a web cam, speaking into a microphone and hoping that enough people would speak back to fill the two-and-a-half hour slot time. I still played music, and still had them compare the car chases in “Blues Brothers” and “Raiders of the Lost Ark”, but I felt detached. I grew to recognize some of the voices, but most of my students became little more than names on e-mailed papers.

Suddenly all my strengths as a teacher were replaced by my weaknesses. The rhythm and interaction of the face-to-face course stood aside for my scrambling inability to keep track of the assignments and e-mails and faxes coming to me from four different sources. The atmosphere I created with jokes and anecdotes may exist out at my locations, but I am left with the silent response of a heavily pixilated image of my classroom from the projector, and only the chuckle of my TA to acknowledge my punch lines.

It's kind of like a gross exaggeration of a self-absorbed nightmare, where I exist in my own existential plane with a dozen Josh clones, acting only on my own impulses, performing only for myself. I'm the Star Wars Kid with a Master's Degree.

I think the biggest problem is that I feel like I’m not doing my best job as a teacher. When a student asks me to explain a point, I don’t know if my answers are understood, or if the student just doesn’t feel like asking the question again. I don’t know if the comments I make on their papers are enough when I can’t look them in the face and explain what I really mean. I don’t know if most of them are on Facebook through most of class, leaning on the same three classmates to make comments every time after the obligatory post-question silence.

Here again, I don’t want to bite the hand that feeds me. Teaching classes, whether face-to-face or via IP Video, has been one of the big reasons I’ve retained enough freedom to explore my options in film and writing for the last few years. I might still be stuck framing multi-million dollar homes in Eaglewood for $8 an hour without them.

But in spite of the golden age of technology and all it offers (like real-time blog posts), I will still opt for the face-to-face over broadcast any day. Via satellite, I can do my job. I can get the material through. But in person, I can do it in style.

Besides, my new band really needs a bass player.
Posted by The Professor at 10:06 AM