I was supposed to know better. I was the kid who was listening to The Beatles in the fourth grade, while my peers were listening to Bon Jovi. I was the kid who bought the Sgt. Pepper album when it was still an album, and got into Simon and Garfunkel a good ten years before my high school peers decided that was a cool thing to do.

It’s been hard enough to live with the fact that for two years in junior high, I abandoned my promising upbringing to indulge on a lot of top-40 crap, but now the situation is worse. It turns out a lot of the CD’s I picked up during that era were better than I thought. “Please Hammer, Don’t Hurt ‘Em” may not be a keeper, but The Fine Young Cannibal’s “The Raw and the Cooked” was. So was Peter Gabriel’s “So”.

This would be all well and good if I had kept my entire collection, but during that three-year period when you could actually get a few bucks selling used CD’s to music stores, I cleared out the junior high era. And now I’m buying all the best stuff back.

The newest entry on the “Doh!” list is the B-52’s 1989 classic, “Cosmic Thing”. Thanks to Saturday night’s concert at The Depot, I am now an official B-52’s fan. And I really feel stupid that I didn’t hold onto that CD.

About three months ago I was driving on the freeway when “Love Shack” came on my stereo. As I listened to the zany lyrics and enjoyed the driving dance beat, I thought to myself that this might be a fun band to see live, and remembered seeing a listing for them on the Depot’s Web site.

I was right on both counts.

So an hour into the University 32nd Ward’s Thanksgiving Dinner and Service Auction, I politely excused myself and left to go stand in line outside The Depot for forty-five minutes before the doors opened. I expected a pretty eclectic crowd for a band like this, but save for a few die-hards who dressed up in their best quirky 80’s gear, most of the crowd looked like the same middle-aged group that shows up to all of my concerts.

Noting the growing crowd, a group of pre-teen skaters dressed in chains and tight black clothes asked what we were waiting around for. Our answer triggered looks of disdain and smart remarks, but as they turned to go, I resisted the temptation to tell the little EMO inbreds to go home and take another shot at slashing their wrists, because I figured they’d probably do it.

Finally the doors opened and the eager crowd entered the venue. Unlike my other visits, this concert had strict festival seating, so it was easy for me to muscle up to about five feet from the stage, front and center, where I cooled my heels for an hour before the B-52’s took the stage.

When they did, I quickly noticed three things:

1. They are one of the shortest bands I have ever seen. I wasn’t quite looking eye-to-eye with them, but I swear none of those guys is over 5’7”. That might be why they always wore those wigs. 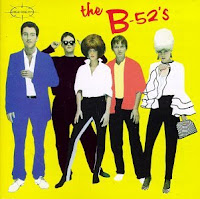 2. The band has been together since 1976. It turns out the B-52’s formed the same month I was born (October ’76), had their first album come out in ’79, and have been touring off and on ever since. So yeah, they’re looking kind of old. This explains the middle-aged crowd.

3. It didn’t matter that they’re getting older, or that I only knew three of their songs. Call me a half-cocked fan (until last weekend, I was), but I only went into the concert knowing “Love Shack”, “Roam”, and “Private Idaho”. However, thanks to some killer riffs and some incredible energy, I had a blast with every song. This is a FUN band to see live.

The band was so good, in fact, that I spent their entire 90-minute performance shaking my usually inhibited booty up front with the rest of the crazy fans. This was not a concert where everyone plays cool in their seats while one drunk dude wanders up and does some kind of weird acid-groove by himself in front of the stage. This was a concert where anyone on the floor who wasn’t grooving looked like an idiot.

Of course “Private Idaho” and “Roam” sounded great, but Saturday night I became an equally big fan of songs like “52 Girls”, “Strobe Light”, “Give Me Back My Man”, and especially “Channel Z” (which was on the “Cosmic Thing” album—DOH!). “Love Shack” ramped things up into a frenzy, and during the “Rock Lobster” encore we all crouched down to boogie. Even thirty years after getting together, the band rocked hard and brought fresh enthusiasm to their weirdo grooves. Cindy Wilson did her yoga moves while the stage fan blew her blond hair, Kate Pierson shook her hips under a flaming red tower of hair, and Fred Schneider tapped his Glockenspiel and brought his flaming…well, yeah.

Through it all, Keith Strickland led a killer rhythm section with a barrage of killer Fender Strat riffs that were every bit as Bad-A as anything Keith Richards ever cooked up. In every measure, The B-52’s lived up to their title as “World’s Greatest Party Band”. But in spite of the killer grooves, the outer space lyrics, and all the hokey gimmicks with pennywhistles and walkie-talkies, the band never lost track of their focus, which was to have fun.

The only evidence you’d need to back up that one would be to see this guy dancing in the middle of it all.
Posted by The Professor at 4:05 PM