Snatching modest victory from the jaws of brutal, total annihilation

After writing about my 15-year-old Jr. Jazz heroics earlier this week, I was reminded of another old war story that managed to teach me a lot more about life. It didn’t involve any comebacks, and it certainly didn’t involve any championship seasons, but it was an important victory nonetheless. 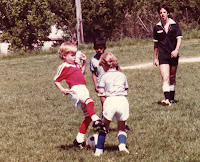 My athletic achievements in life have been few and far between for sure--most often I have tried to make up for a lack of skill with a generous dose of brutality (see photo at right)--but there is one mark I can claim that few have ever attained: In my very first church basketball game, I scored all of our team’s points. Not even Kobe Bryant can claim that one.

See, during a little window of time in the late 80’s, my ward—the Bountiful 19th—only had two kids between the ages of 12-14 (the qualifying age for the annual Deacon’s Basketball Tournament). Legally we couldn’t reach up a level to recruit more players, but we were allowed to reach down into the minor leagues and call up a few 11-year-olds to fill out the roster. Hence, a full year before puberty and the Aaronic Priesthood, I was called up with half a dozen of my peers to enter a basketball tournament that was literally out of our league.

Over the course of a cold weekend in the winter of 1988, our rag-tag squad played five games against rival wards in the Bountiful North Stake, squads of players who were a good year and a half into puberty, players who had each of us by about six inches and fifty pounds.

In the years to come we would forge rivalries and play with competitive passion to stake out our athletic territory in the region, even though any player who was good enough to play on the school team was automatically ineligible to enter the church leagues. But that Friday night in February, the Bountiful 19th Ward only showed hints of our glory to come.

For most of the first half, we failed to advance the ball farther than the opposing three-point line. It was like we were playing football instead of basketball. We weren’t even getting any shots off. The opposing guards were stealing the ball and picking off passes before we could even get into position, let alone try to run our offense.

The 13th Ward (I think it was the 13th Ward, though it really doesn’t matter) gleefully ran up the score throughout the first half, piling on the points on fast break after fast break, hitting three-point shots with abandon, shooting in the assurance that if they missed, a teammate would grab an easy rebound and let them try again. My rogue band of teammates tried to stay competitive, tried to play with fire in our bellies, but it didn’t do any good. There was no way to stop the bleeding.

At halftime our coach approached theirs and tried to talk him into letting us at least get the ball past half court. I don’t know how he responded, but it was a church game, so he probably told him to go jump in the lake.

Eventually I decided that we might stand a better chance if I stopped playing defense. So I hung back at our end of the court as the 13th Ward continued their assault, then waved frantically at our point guard when we got the ball back. Phil Johnson gave the ball a tremendous heave, and somehow I was able to chuck the ball up at the basket before the other team could swat it out of the stratosphere.

The crowd erupted. We were finally on the scoreboard.

Our relationship would become more strained later in life after I accidentally drove through Phil’s family rabbit cages on his motorcycle, but at that moment, we were Stockton-to-Malone. (Well, actually we were more like Montana-to-Rice on that play. I always was a better football player.)

Our new strategy lasted about five more seconds, as our opponents immediately adjusted to my cherry-picking ploy and prevented any further embarrassment. Their shutout hopes had been dashed, but they weren’t about to go down without a fight.

As the second half wore down to its final seconds, the brave players of the 19th Ward kept on plugging, kind of like when Cool Hand Luke keeps taking half-conscious swings at Dragline even though there’s no way in the world he’s going to win their boxing match. With under a minute left, I took a pass somewhere inside the three-point line and turned to throw up a shot as a rival player hacked me on the arm. The whistle blew and my shot bounced off the iron. It was the first time our team had taken free throws all night.

Lots of people debate back and forth about whether God has any interest in the outcome of sporting games. My feeling is that He understands how irrelevant most of it is, but will allow success in certain situations in order to encourage or inspire others to deal with the more pressing matters in life. He doesn’t care who wins the Super Bowl, but He does care about teaching us that sometimes hard work pays off, or in other cases, that we have to be satisfied with our own efforts because the world won’t always give us what we deserve.

In this case, I’m pretty sure He was looking down at this punk eleven-year-old standing at the free throw line and thought to Himself, “this kid can’t shoot for beans, and when he gets home from his mission he’s going to get stuck in singles wards for ten years. But his team has put up a good fight tonight. This ought to be pretty funny.”

For the first (and probably only) time in my organized basketball career, I hit both of my free throws. Each score was met with a spirited cheer from the audience, and luckily my team was too young to feel embarrassed by it.

Looking back on that experience, I’ve realized that my first church ball game was a pretty effective metaphor for the Atonement, and for life in general. It even clarifies the age-old debate between Grace and Works. When you consider everything we have to face in life, and all the weaknesses we bring to the table, there’s really no way we are going to live up to everything we are asked to be. We can’t beat the 13th Ward. We can’t knock out Dragline. In spite of all the “Rocky’s” and the “Hoosiers”, this underdog role is pretty much set in stone. But if we put up a good fight anyway, and play with sincerity, our best will be enough, because in the end we’ll get the help we need. And we’ll probably wind up with some good stories to tell when it’s all over.
Posted by The Professor at 12:42 PM