The last ride of Redbeard... 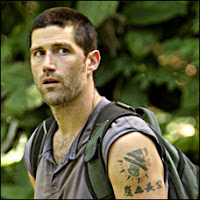 There’s one thing I hate about “Lost”, and every other TV show about people stranded on desert islands. I call it “Whisker Memory Syndrome”. No matter how long they are stranded, or how removed from daily niceties like straight edge razors or shaving cream, the guys always have perfect scruff-beards, and the girls always have smooth legs.

Well, check that; I guess I only really hate the guy’s side of the equation.

If I ever get stranded on a desert island, I’m going to look like a Wookiee monk within two weeks. All the beautiful survivors are going to vote me off the beach, and I’m going to have to go hang out in the jungle with the poisonous snakes and wild hogs. Back in the eighth grade, I thought shaving was cool, even if it didn’t matter whether my Bic saw action once a day or once a month. Now shaving is a curse. A daily reminder that if I don’t watch my grooming on a daily basis, someone’s going to throw me in a monkey cage when my guard is down. I swear I’m starting to shave so high on my cheeks I’m going to give myself corrective eye surgery by accident.

Long gone are the days when Dustin Harrison could show up the first day of junior year and blow everyone’s minds with a full beard. Long gone are the days when I got a reputation at Viewmont for being the first guy to embrace the sideburns trend (inspired by the half-episode of “Beverly Hills, 90210” I caught one night). Those same sideburns have survived in one form or another through to today, aside from a one-week hiatus in 1996 when a misguided Mission authority demanded I shave them in spite of the officially stated rule that sideburns could extend to the mid-ear. 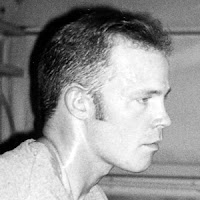 Since then I’ve tried a myriad of combinations whenever the mood hit me, turning my own face into a creative palette for laziness. Immediately after quitting my job at Dick’s grocery in Centerville, I grew a full beard just to see if I could do it (Dick’s had a strict no-facial hair policy). At the tender age of 18, I had all sorts of people mistaking me for 26. 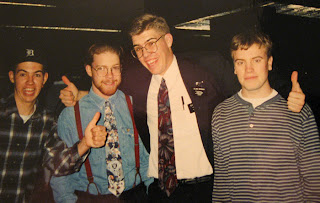 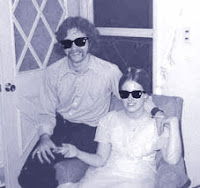 Then I’d cut it back into a goatee for a while, and usually just for kicks I’d shave the middle of my chin and go with a smokin’ Fu Manchu moustache for a day before shaving the rest of it. I come from a veteran moustache family (note the 1972 shot of my parents at right), but I’ve never really embraced the solo upper-lip action myself.

These days, the most I go with is a subtle Soul Patch to keep me feeling edgy, though most of the time I even chop that off out of boredom. Even though it’s a tremendous pain in the arse, I prefer to be clean-shaven over all other options.

Unless I’m in an anti-social mode, of course. A couple of days before this year’s run of Halloween parties, I let my beard grow out to enhance my pseudo-funk master hippie costume, and when it all finished, I decided to go ahead and let the whole thing run wild for a while. Suddenly longtime friends and acquaintances discovered that I do in fact have a lot of red in my hair. And I discovered that I have a little gray in my beard.

And thus began the 2007 equivalent to my favorite sequence in the early 80’s classic “Mr. Mom”, where Michael Keaton slowly loses his grip on reality (and on household maintenance), lets his beard grow out, lives out of the same flannel shirt every day, and gets himself hooked on “The Young and the Restless”. He puts on a little pot belly and starts regular poker nights with all of the local housewives, too, for good measure.

Luckily he snaps out of it in time to fend off the advances of his divorcee neighbor (Ann Gillian-attractive in a twisted Betty Crocker kind of way), get the house back together, and save his wife (Terri Garr-attractive in a "Young Frankenstein" kind of way) from her boss (Martin Mull-attractive in a not really attractive way). All set to the theme from “Rocky”. It’s a great flick. I highly recommend it. 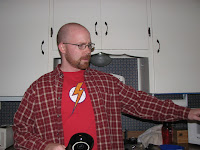 I haven’t been wearing flannel near as much as I did back in the 90’s, usually going with a hoodie instead, but as the beard kept growing, I kept on watching daytime TV (all those online shows I mentioned a couple of weeks ago). And my semi-regular visits to the gym haven’t helped me get rid of my ab yet. Keaton lives today, and he is me.

Which may be part of the reason I decided to set aside the freelance stuff for a bit, and take a producing position on a new TV show KJZZ is working on. We won’t go on the air for a few weeks, so I’ve got some time to put on the “Rocky” theme and take care of some unfinished business. I’ve still got a couple of weeks left on my USU broadcast course before I hang up teaching for a while, and I’ve been working hard on a memoir project I’ve been trying to get in the mail for a year now. Maybe shaving this beard will trigger a little action, too.

If you see a Wookiee monk hanging out in the produce section in a few months, you’ll know things didn’t go so well.
Posted by The Professor at 4:49 PM