Last night an old mission buddy of mine invited me over for dinner with him and his family. Without hesitation, I accepted and entered the house to find his three children lined up dutifully on one side of the dining room table. After a round of introductions and a little preparation, Brad (my friend) asked his oldest daughter—round about five years of age—to say the blessing on the food. She obliged, and about halfway through the job I picked up this line:

“…and please bless that while Daddy’s friend is here, Braden and I won’t show off.”

I tried hard to stifle my laugh, since I didn’t want to send her the wrong message. But when the prayer was finished, I looked up to see Brad and his wife Jamie grinning broadly.

“We had a little talk this afternoon before you came by,” I was informed.

That gem of a blessing automatically made my all-time top-three Prayer Pantheon, along with a pair of candidates that not so surprisingly occurred while a missionary in South Chicago. Here are the others:

At one point late in my stay on Chicago’s South Side, I teamed up with another missionary named Munson to visit a teenage girl who had recently become very religious. Her family was very supportive, though as we spoke with them it almost seemed as if they were a little intimidated by her newfound zeal. After we taught the family a first discussion and delivered a copy of the Book of Mormon, the girl asked that we all stand and join hands for a closing prayer.

This was nothing new to us, so we obliged, joining hands with the other half-dozen people in the room, and when the girl calmly intoned, “Our Heavenly Father…”, we thought we’d soon be out the door on a nice spiritual note.

Then her voice jumped from about one to eleven on the volume knob as she screamed, “IN THE MIGHTY NAME OF JESUS!” and proceeded to belt out a prayer that reached not only God, but most of her immediate neighbors.

At this point her six-year-old sister screamed, broke ranks, and ran out of the room in terror. So her dutiful older sister began to pray on her behalf as well, that she would “come back to the family”.

Munson and I, on the other hand, stayed faithful up until the end of the prayer. My favorite entry in The Prayer Pantheon took place in Kankakee, Illinois, while visiting a local less-active family. We had a nice visit with them, and requested that we conclude with a prayer. The father asked one of his young sons, a diminutive youngster that couldn’t have weighed more than fifty pounds at the time, to do the honors.

So this poor little kid knelt on the carpet in front of us, squeezed his eyes real tight, and gave it the old college (or in his case, second-grade) try.

“Our Heavenly Father…” he started uncertainly.

“We thank Thee for this day…”

“We thank Thee for this day…” he repeated.

Now a real loooong pause. We were really feeling for this kid by now. 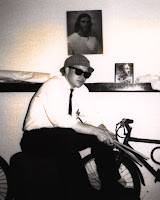 Possibly one of the most sincere prayers I have ever come across.

It’s hard to be critical of anyone who is sincerely doing his or her best to commune with Deity. There are those I’ve witnessed that have been a little low on the sincere side and high on the performance side, but that’s really not my place to judge, particularly when I’ve been guilty many times of going through the motions and tossing out a repetitive yawner at 2AM myself. I’m pretty sure God hears all of them, regardless. And I’m guessing that when it comes to kids, the message always gets through loud and clear.
Posted by The Professor at 9:11 AM