Once you pay money to attend a comic book conference, the denial phase of your nerdiness is pretty much over. It cost me $30 to come to grips with my condition.

I have always accepted the fact that I’ve held a long passion for a number of things considered “nerdy”, as evidenced by my choice of Halloween costumes as a child. Even so, I still hesitated to embrace a total nerd identity, partially because I didn’t think it was accurate, mostly because I thought that would officially kill my chances of ever scoring a pretty wife. 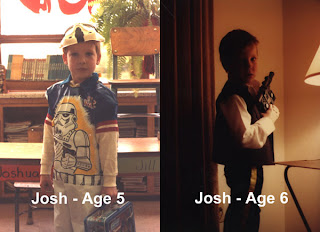 My problem with the nerd moniker is that I think it’s too limiting. The image is of a scrawny, google-eyed kid with bad hair and a nasal voice that spends all of his free time buried in calculus books and X-files episodes, feverishly taking notes on continuity errors that he will promptly post to his self-managed web forum. Apparently this guy never exercises, talks to girls, or bathes.

I do all three of those things on a regular basis, so how can I really be a nerd?

The answer is that nerdiness is not a condition as much as it is a series of degrees. The stereotype comes from a full-blown degree reserved only for the chronic nerds, but in reality, everyone that has any semblance of imagination can lay claim to at least a small degree of nerdiness.

I recently had to face the fact that I’ve embraced a slightly higher degree of nerdiness lately, as is evidenced by the clip below:

But Harry Potter fixation aside, I was still hesitant to walk headlong into a convention center full of what I assumed would be a rabid herd of high-degree nerds, dressed to the hilt in super hero costumes and drooling incessantly. It was kind of like the way I felt before starting grad school in USU’s English Department, when I worried that I’d be spending the next two years in classes full of depressed girls who dressed in black and had lots of scars on their wrists. 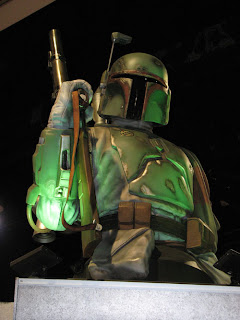 As my sister and I approached the convention center, we started to take notice of the increasing number of costumed people on the sidewalk. The first one we spotted was dressed as a Stormtrooper from Star Wars, and he proved to be indicative of the general trend of the conference. This summer marks the 30th anniversary of the release of the first film, and I’d say three of four costumed attendees were paying their respect to King George of Lucasland. 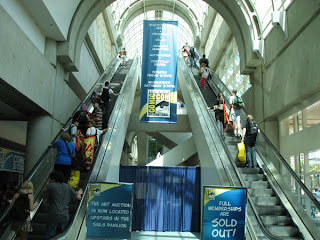 The convention seemed to be evenly divided between the two floors of the center, with the autograph booths and group meetings on the second floor and the merchandise expo on the first. 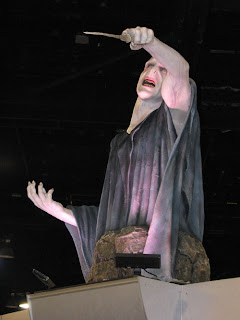 There was plenty of action upstairs, but the high-degree nerds seemed to favor the expo primarily. The floor was a chaotic mess of toys, statues, TV monitors and booths, with thousands of people milling between them like red blood cells in a capillary system. The booths themselves were dedicated to specific artists, toy manufacturers, film companies, and general vendors, many of whom were handing out random free gifts and promotional items. 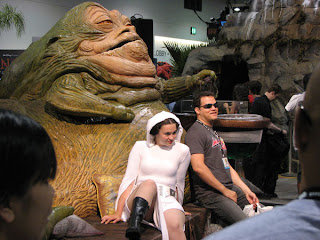 Through this network of walkways strode a number of high-degree nerds, dressed in what must have been painstakingly created costume renditions. I felt conflicted at the sight of them, torn between my culturally engrained “man what a geek” impulse reaction and the sheer admiration of the detail some of these people managed to work into their outfits. Most of these people put the folks at the Harry Potter book release party to shame. 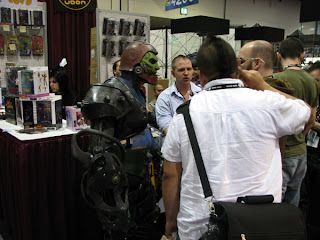 Some of the vendors seemed to be conscious of this uber-nerd atmosphere, and almost seemed to be fighting to make it appear cool in a more traditional sense. At least that’s the impression I got from Spawn creator Todd McFarlane, who signed autographs while several “Spawn Girls” distributed promotional materials dressed in short shorts. Because obviously tanned girls in skimpy outfits flock to comic book enthusiasts. 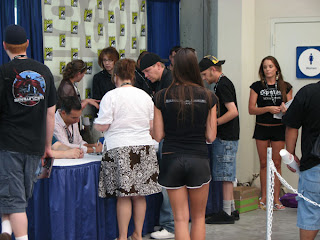 Sorry, Todd. You’re not kidding anyone. We all know that none of those girls have ever read any of your stuff.

It would be dishonest for me to neglect to mention that I actually saw “Return of the Jedi” 19 times in the summer of 1983 (even if I was six at the time), and I was in line for hours with everyone else to see the prequels. But I shuddered to think of how far beyond my level of interest many of these people had taken their mania, and I wondered if somehow by embracing their nerdiness so fully, perhaps they were being more honest with themselves than I was. 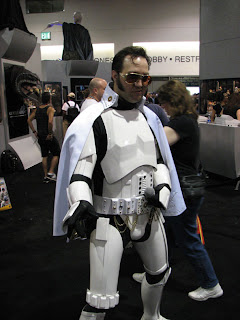 Every once in a while, though, I’d be reminded that I was in the midst of kindred spirits. The best costume of the whole affair went hands-down to the guy that wasn’t satisfied with a mere Stormtrooper costume, and instead integrated his own Elvis Impersonator element to the overall design. If I ever decide to dress up for one of these things, I hope that is the route I take. 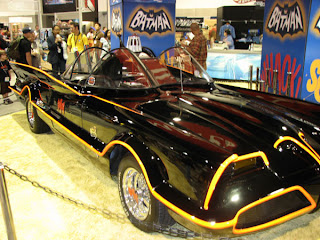 The truth of it is that there was a lot of cool stuff to see, 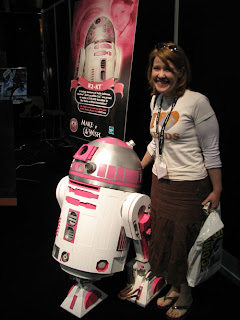 from the original Batmobile to the pink R2-D2 (dubbed “R2-KT”) that was designed to promote breast cancer awareness. Hey, nerds get breast cancer, too.

My original feeling was that I was going down to meet one of my all-time favorite novelists, who just happened to be appearing at a comic book convention. But I soon discovered the same thing I found at USU and the Harry Potter party: a few eccentrics, but mostly kindred spirits. Heck, if I’d brought my football with me, I’ll bet I could have got a game going.

Next up in Chapter III: The lack of "comic" at Comic-Con