When people ask why I hate Carl’s Jr., so much—and they constantly do—I tell them, “false advertising”. Every ad shows a burger that looks like it would be about six inches high in real life, but every burger I’ve had from Carl’s Jr. looks like Paris Hilton ran it over with that car she was washing.

Granted, I am well aware of the fact that advertisers 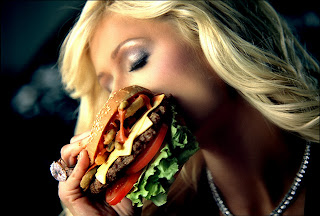 stretch the truth when constructing visuals for their ads, say, by substituting glue for milk in cereal commercials and dubbing vocals for athlete spokesmen who we know can’t really speak English. But the Carl’s Jr. ads, for some reason, just crossed the line.

I don’t hate Comic-Con—far from it. At the same time, the biggest surprise I had from attending this years conference—other than running into Marc “Mike Donovan” Singer from “V”—was realizing that hardly anything at Comic-Con has to do with comic books.

Of course, the very reason I was going in the first place was to see Ray Bradbury, a world-renowned science fiction author who, to my knowledge, has never put out a comic book. But I was still surprised to see how little of the conference was rooted in the comic tradition.

Many of the booths on the merchandise expo on the main floor were dedicated to comic companies or individual artists, but there were plenty of other booths that had nothing to do with comics whatsoever, like the row of custom painted Darth Vader helmets. (My favorite was “Carmen Miranda Vader”.) 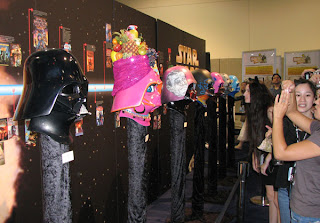 It seems that over the years Comic-Con has grown past its roots and become more of a general pop culture conference, which is fine. I’m not going to complain about a group of people who’s combined efforts give me the chance to see my favorite childhood author.

It was also fun to get sneak previews of some of the upcoming events in the pop culture world, even if my sister and I stumbled onto them by accident. Immediately after arriving and registering, Katie and I cruised over to the room Bradbury was scheduled to speak in, not knowing whether we’d have to stake out a spot in the room from 9AM on in order to assure our attendance. When we entered the room, we found ourselves watching the pilot episode of the “highly anticipated” fall TV show from the creator of “Heroes”: “Pushing Daisies.” 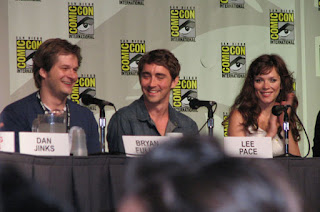 We sat down and I promptly began digging through my program to start strategizing, but eventually I turned my attention to the screen, and in no time was enjoying what looks like a really fun show. “Pushing Daisies” has a very fairy tale-esque feel to it, much like “Amelie”, which also happens to be one of creator Bryan Fuller’s favorite films. 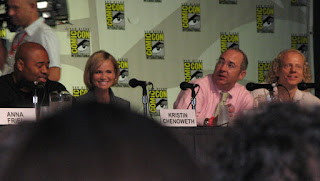 Halfway through the showing, a guy turned a TV camera on my sister and I, and I quickly tried to stop Katie from text messaging. I figured we’d been busted. It turned out the entire cast was sitting right in front of us.

Once the showing was over, the cast—along with Fuller and producer Barry Sonnenfield—took the stage to answer questions. The first question came from one of those guys I figured this conference would be swarming with, a short fellow who dropped a bomb of an existential question on the cast about the style of the show, inventing the word “symmetricality” in the process. 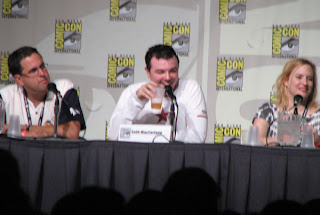 In the afternoon, we caught the “Family Guy” presentation in the same room. To be honest, I don’t really like “Family Guy”; it has it’s moments, but for the most part I see it as a pale imitation of “The Simpsons”, trying too hard to be shocking rather than putting the focus on the social satire and letting the shock happen naturally. But they did show a clip from this season’s premier episode—featuring a cast re-enactment of “Star Wars”—which was pretty funny, and creator Seth McFarlane seemed like a pretty cool guy, so I humbly agree to disagree. 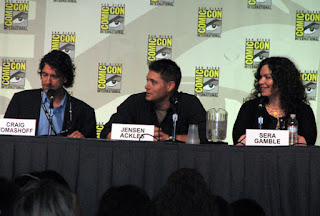 The “Family Guy” forum was followed by a similar spot for “Supernatural”, which from what I could tell is basically an “X-Files” knockoff with two beefcake brothers substituted for Mulder and Scully. This might explain why I have yet to watch the show.

My only real exposure to the comic scene was later in the day when Katie and I tooled around the expo floor trying to find souvenir gifts. There were a lot of artists who’d staked out individual booths to show their personal work, though I really couldn’t tell if it was published stuff or just stuff they wanted to get published. I didn’t feel much like striking up any conversations, mostly because I was still in shock from having spent $30 for David “Darth Vader’s Body” Prowse’s autograph (more on that in the next chapter).

Comic-content or no, the convention was no Carl’s Jr. In fact, given my initial reaction to the notion of attending a comic book conference, my visit was more like seeing the flat burger on TV then getting the six-inch specimen in real life.

It’s all about symmetricality, you see…

Next chapter: The Autograph Paradox

Posted by The Professor at 9:55 PM