A few basketball-related thoughts and observations from the last few days:

1. Back in the eighth grade I could identify 75% of the male population of Centerville Jr. High by the basketball shoes they were wearing. This came partially from the fact that I spent most of my Jr. High experience looking at the ground out of fear and a maladjusted puberty-inspired inferiority complex, but mostly because in the heyday of the Nike/Reebok/Converse era, basketball shoes made the man, especially the prepubescent man.

The reason I bring this up is that last weekend I caved in to one bit of unfulfilled business left over from that era: the Nike Air Flight 89’s. Back then the 89’s held second place only to my coveted Air Jordan IV’s on my list of “basketball shoes I wanted but couldn’t afford”. The Jordan’s were up in the $115 range, and were way too far out of bounds for a kid who struggled to work enough at his summer farm job to pull down $25 bones a week. But the 89’s were more in the $90 range, and thanks to an inside tip, $65 if you ordered them through the local Village Sports Den outlet.

$65 was within range, but in a harsh twist of fate, the Village Sports Den option never panned out, and I was left only with a dream, along with a pair of Adidas low tops that were functional—and black—but just not what I wanted. 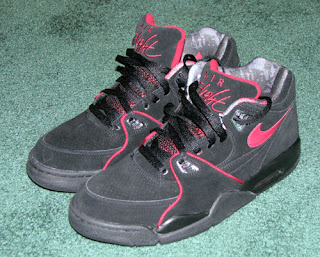 Until last weekend. In recent years, Nike has re-released a number of their old classic models with slight style modifications in an effort to cash in on the retro trend. (Also, I suspect, because 95% of their shoe designs over the last fifteen years have sucked). To my surprise, the Air Flight 89’s were reborn, and up at the Layton Hills Mall Foot Locker, I completed the circle that started eighteen years ago.


2. The NBA has been up to its composite-grain eyeballs in controversy in recent weeks, what with the refereeing scandal and the Garnett trade. I’m actually rather pleased with the ref scandal, since it’s called attention to so many bogus non-calls over the years (Jordan pushed off in ’98!)

But the story that makes me smile is hearing that Penny Hardaway signed with the Miami Heat, bringing him back together with Shaquille O’Neal for the first time since their early days in Orlando back in the 1990’s. It reminds me of one of my favorite Shaq-isms, where he compares his NBA sidekicks to Vito Corleone’s sons in the Godfather movies. Kobe Bryant is Sonny, Dwyane Wade is Michael, and Penny is poor Fredo. 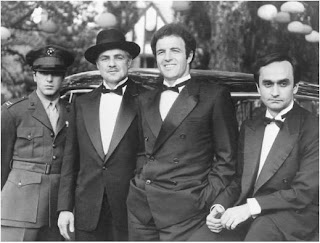 I’ve often thought that my mission greenies—my own “sons”, if you will—fit into the same pattern. To do so I have to omit one of them—I had four greenies—and so Hamilton is out. We’ll just assume he was in his home town of Valencia when Jack Bauer failed to stop the nuke on “24”, taking him effectively out of the picture.

Which leaves the following:

Sonny: In “The Godfather”, Santino was Vito’s firstborn, a passionate hot-tempered James Caan who punched first and asked questions later. In fact, he even asked questions when he shouldn’t have, too, which led to Solozzo’s attempt on Vito’s life when he was out in the street shopping for oranges. My second greenie, Elder Vinson, was actually two years older than me, and was similarly passionate. We never got into any fistfights with anyone while we were together, and I was never shot next to an orange stand, but by virtue of his age and his temperament, Vinson is my Sonny. If I had any companion who would be most likely to get shot 56 times in retaliation for beating up his sister’s abusive husband, Vinson’s the guy.

Fredo: Poor, poor Fredo. He always wanted to be someone big in the family, but things just never worked out for him. In fact, bad things always seemed to happen around him. He was on guard when Vito got shot, and he gave in to Roth and the others when they tried to assassinate Michael in “Godfather, Part II”. Based on his good intent and unfortunate track record, Elder Clark gets my nod as Fredo. In our three months together, Clark got hit by three different cars. He got two flat tires within sixty minutes of each other. He shredded a brake cable. I’ve never seen anyone shred a brake cable. And this is after spending part of his childhood in a nudist colony. When I think back on most of my companions, I wonder what they’ve accomplished in life: whether they’re married, if they have kids, where they’re working, etc. When I think about Elder Clark, I wonder if he’s dead.

Michael: This choice is easy. Michael was Vito’s youngest, and Elder Tubbs is my youngest. His combination of humility and confidence, not to mention natural ability, makes Tubbs the easy nod for taking over the family business. The scary thing is that after two months of pounding the pavement in South Chicago together, I realized that down the road if I could find a much more attractive female version of Tubbs, I should marry her. That’s how well we worked together.


3. Last night I had an existential experience playing “Around the World” in a friend’s backyard. I’m trying to decide whether the experience represents any kind of eternal truths, and if so, which ones. 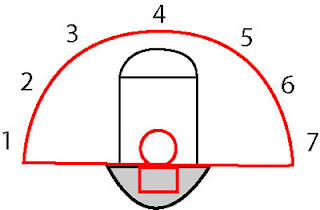 For the uninitiated, “Around the World” is a simple basketball-related game where participants take turns shooting baskets from a semicircle of predetermined positions around the court. When you make a shot at spot #1, you move on to spot #2, and so on. Once you make it all around the semicircle, you work your way back, and the first person to successfully do so wins the game. If you miss a shot, you lose your turn, unless you decide to take a “chance” shot. If you make your chance shot, you move on, but if you miss it you have to go back to the beginning and start over on your next turn. You can also take a “life” shot, which offers the same reward if you make it, but eliminates you from the game altogether if you miss it.

So here’s what happened: over the course of an hour, I won. I didn’t win because I was a better shooter; in fact, I don’t think I was even in the top three or four judging by pure ability. I won because I was the only one who refused to shoot “chance” shots. So I doggedly stayed in my peak position—even if it took me four or five turns to advance—while everyone else kept blowing chance shots and going back to the beginning. Plus the two best players eliminated themselves by missing “life” shots. By the end of the game, several other players took—and missed—“life” shots simply because they were bored with the game and wanted it to be over.

Now, I know that there are many times in life where you need to take risks in order to grow and progress. But given the outcome of last night’s game, I wonder if the “chance” shots didn’t represent those kind of risks, but rather the kind of irresponsible risks associated with “straying from the straight and narrow”. If that is the case, then you could say my victory—and, by consequence, eternal salvation—came by virtue of keeping my “eye on the ball” and “enduring/persisting to the end”, in spite of the many people nagging me to take chance shots who wound up eliminating themselves on life shots later on.

Or maybe it was just a simple game of “Around the World”.

Posted by The Professor at 5:23 PM