When he was twelve years old, Ray Bradbury went to a carnival and met his destiny. An energetic performer named “Mr. Electrico” worked the crowd with bravado, backed with a dazzling electric lightning show. When he spotted young Ray, he drew his electric sword and knighted him on the spot, commanding him to live forever. Bradbury went home and started writing stories, and never looked back. 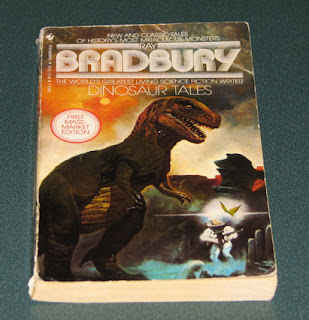 He took my dad along with him. Fifty-two years after Mr. Electrico gave Bradbury immortality, my dad added a copy of “Dinosaur Tales” to his already impressive collection, and introduced me to the most influential author of my youth in the process. He’d been a fan since childhood, and I’d noted all of the exotic Bradbury titles on the bookshelf in our den. But until I saw this strange book with an astronaut facing down a Tyrannosaurus Rex on the cover, I’d never cracked one.

Twenty-three years down the road, the “World’s Greatest Living Science Fiction Writer” was still making the most of his gift of immortality, and when my sister Katie discovered he’d be making a cameo appearance at Comic-Con 2007 in San Diego, we knew it was time for a road trip.

Like George Lucas and J.R.R. Tolkein, Ray Bradbury possessed a mastery of imagination that resonated in everything creative I did, from my primitive monster drawings at age five to my graduate thesis at age twenty-seven. I’d even loaned a copy of “The Martian Chronicles” to my eighth grade English teacher in my zeal. For years I’d read and re-read his tales of Mars and rockets and aliens and goblins, astounded at the way he wove nostalgia and horror and science fiction, all with the same enthusiasm he took to meet Electrico at age twelve. If there was a chance to meet him, I had to take it.

So Katie and I packed up my car and drove a thousand miles into Southern California, braving Death Valley heat, gouging gas prices and hordes of comic book geeks to see our hero. We packed copies of our favorite Bradbury books, hoping to bring them to the feet of their creator and tell him how much his work had influenced us. 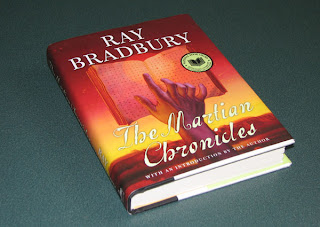 Our only concern was that our $30 registration fee only got us in the door of the conference. Individual forum attendance was first-come, first-serve, and so we spent the day in a state of semi-paranoia, only wandering so far to explore, careful to stay within striking distance of Bradbury’s scheduled afternoon auditorium.

We tried to keep our hopes modest, but when we won two of the hundred passes to actually meet Bradbury after his presentation, we suspected that all the pieces were falling into place, but we still didn’t relax until we saw him wheeled into the conference room just after 4PM. 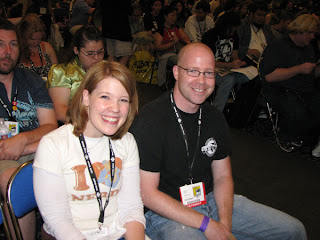 When he rolled onto the floor in his wheelchair, the audience spontaneously erupted into a standing ovation. I was immediately struck by how different his presence felt than that of the other conference guests I’d seen. Bradbury seemed more like everyone’s grandfather, or even a beloved religious leader, so much more than a regular celebrity. 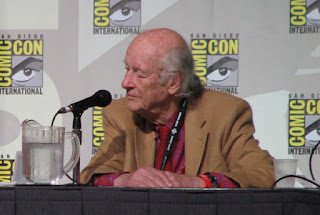 He shared the stage with longtime friend Ray Harryhausen, the mastermind behind “Clash of the Titans” and “Jason and the Argonauts”. The two met when they were eighteen, and celebrated a friendship of nearly seventy years.

Over the course of an hour, the old friends took turns updating us on their current projects and the anecdotes behind some of their old ones. Bradbury waxed nostalgic on encounters with Walt Disney and Katherine Hepburn, while Harryhausen told us about his efforts to restore and improve some of his pioneering monster movies from the 40’s and 50’s. 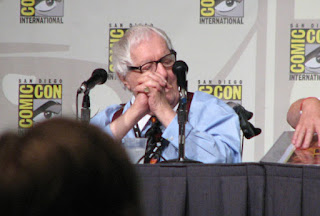 Bradbury went on about the Paris club he used to haunt with all of his science fiction writer contemporaries, outcasts who’d been warned against publishing in magazines like Weird Tales and spending their time on topics of fantasy, shunned dreamers who gathered with each other because no one else wanted them around.

As he began addressing audience questions on the inspiration for “The Martian Chronicles” and “Farenheit 451”, Katie and I slipped out to get into our autograph line, hoping that in spite of his 87 years of age, Ray would be up to the task of meeting all 100 of the drawing winners.

Within minutes Bradbury emerged onto the conference floor in his wheelchair to a second ovation, and he was quickly wheeled around to a signing table and given the first of many treasures to sign while his fans looked on.

Katie and I nervously waited as the line shuffled forward ahead of us. We waited with baited breath for the accursed words, “Mr. Bradbury is not feeling well; he has to go”, that would cut our pilgrimage short by mere inches. I had painful flashbacks of getting within inches of meeting my childhood basketball idol Darrell Griffith of the Utah Jazz, only to have his publicist pull him away from the autograph table just as I reached it. 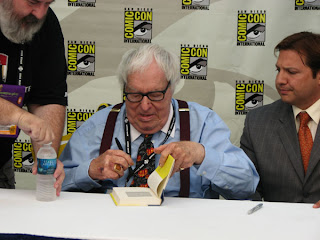 But Ray plowed on through the line with the same vigor that has pumped out a new story every week for 75 years, even though his signature poured so slowly out of his aged right hand that we felt almost ashamed to put him through the effort. 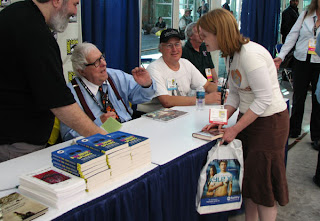 Finally, Katie and I arrived at the head of the line, and delivered our books almost as an afterthought to the chance to meet our muse. Even in his advanced age, his enthusiasm still shone through his bright nasal voice and gleaming eyes that still peered through those same horn-rimmed glasses I’d seen in photos for over two decades. 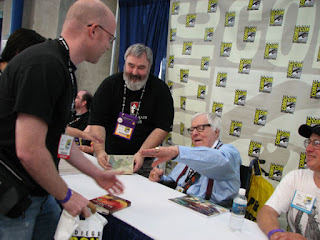 After he finished signing my brand-new copy of The Martian Chronicles, he looked up at me as I mouthed “thank you” and extended his left hand, almost as if he knew that I secretly wanted him to tell me to live forever too, just like Mr. Electrico had done for him so many years ago. I took his hand and shook it delicately, feeling no bolt of lighting aside from the simple satisfaction of getting to say thanks to a man who’d touched my life for so many years. It was a moment that never could have taken place without a sister’s sharp eye and a father’s enthusiastic influence.

And at that moment, the pilgrimage was complete. 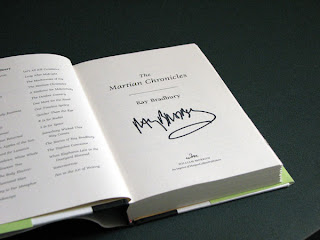 Posted by The Professor at 2:50 PM