By normal standards, my nerd resume is pretty full.

4. I waited in line at Wal Mart for an hour and a half at 1AM to buy the seventh Harry Potter book, and read it within four days.

5. Worst of all, I just got back from driving 1,000 miles to San Diego so I could meet SciFi author Ray Bradbury at a comic book convention.

That stuff is really just the tip of the iceberg. But even a full nerd resume would reveal at least one gaping hole: gaming.

I’ve never really embraced video games. Lots of my friends have. They seem quite happy about it, also. Even jocks love video games. But I don’t. 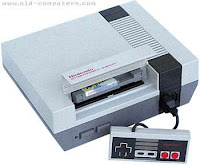 I had my moments. One time in a burst of spontaneity my parents picked up an original edition Nintendo, to the utter shock of my sister and I. For years our friends and acquaintances had been stockpiling a three-year supply of gray game cartridges to go with their families’ food storage, and Katie and I had only occasionally sampled their wares.

For the next two months I became obsessed with Super Mario Brothers, until I finally passed the dumb thing while staying home sick from school. I was so excited I jumped up off the floor, swore, and knocked over my glass of orange juice. Such was the joy of getting past that stupid dragon in world 8-4.

I played Super Mario 2 and 3, but never put any real time in on them, and eventually my interest in Nintendo gave way to my wistful dream of winning Super Bowls as a DB with the Oakland Raiders. But I never made it to the NFL, either.

What I did do was eventually parlay my childhood interest in art into an interest in computers, which eventually led me to buy a Mac. I picked up a G4 in 2000, then paid cash for an Intel iMac last November. When I did, I soon discovered a feature called “Widgets”, little icons for your desktop that perform random functions. Things like mini-calendars, quotes-of-the-day, stuff like that.

A quick perusal of the Apple Web site revealed a number of free Widgets to download, and soon I filled my computer screen with them. I had the animated lava lamp, the Chuck Norris quote machine, and a special meter that showed me the “cheapest” gas prices in my area.

But I also picked up one that let you play the old Atari game “Asteroids”. It was a simple little thing, with basically the same display as the original from 25 years ago. You were no more than a little triangle in the center of the screen that shot at the blobs that came at you. I loved it for its simplicity; it was almost an anti-game for the anti-gamer.

But then I loved it too much. What first was a novelty quickly became a toy for break time. Then I started firing it up when I just didn’t feel like working. As my scores climbed past 100 and 200,000 I began to gain confidence, and refused to stop until I had achieved certain base-level scores. My competitive instincts began to flare up, and soon I was mouthing off to my computer, as if it were responsible for my humiliation and poor showing. On a couple of exciting runs I blasted my way past 300 and 400,000 points, only to be thwarted by an overwhelming barrage of asteroids and those teeny little ships that would fly around the screen and shoot at you while you desperately tried to hit them with your painfully inaccurate blaster.

Finally I realized what was happening to me, what might continue to happen to me if I didn’t stop. I was a well-rounded guy, I played sports, I dated. But if I allowed myself to get into this, if I even hinted at becoming a “gamer”, it would all be over. I couldn’t face complete and total nerd-dom. More importantly, I couldn’t let a Widget keep me from the work I was supposed to be doing.

So I sat down for one final round, vowing to delete the Widget as soon as I was done. I wanted to make one more good run, and not get blown up by some errant asteroid fragment or because the computer didn’t re-start my new life until I was just about to get shot by one of those mini-ships again. No, my last hurrah would be legit.

Round by round I pulverized the lo-tech asteroids that flew through the screen. Loud booming crashes sounded from my computer speakers and sub-woofer as big asteroids were shattered into little ones. Wails came from the little spaceships that tried to gun me down, but I destroyed them all as I marched towards my finish line.

As if to tempt me, as if to say, “Josh, you have a future in this…keep playing!”, I reached 445,200 points before losing my last man. Only the second time I ever got past 400,000. It may have been my all-time record, but thank goodness I never got into this thing enough to actually write down my final scores.

Satisfied, I clicked on the “Manage Widgets” button at the bottom of my screen and trashed “Asteroids”. The day may come when I opt to fully embrace the total Uber-Nerd inside me, when I can no longer resist the temptation of full membership.

But it will not be this day.