Bourne is the New Black

The Bourne Ultimatum
Three stars out of four

My buddy Spence didn’t like the first “Bourne” movie. We discussed the matter while riding longboards through the streets of Huntington Beach, California at 1AM. While he felt the film lacked coherence and personality, I enjoyed it enough to lay down ten dollars to see it a second time up the coast in San Francisco. 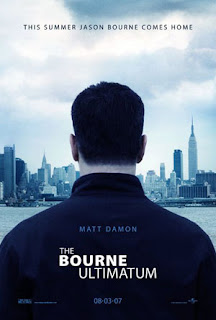 That was five years ago. I haven’t gotten Spence’s feedback on “Ultimatum” yet, but all I can say so far is that I dug it. A lot. Enough to spend $8.25 to see it a second time at the Layton Hills Cineplex Odeon the day after I saw it the first time. (I don't know whether to be happy that five years later Utah's ticket prices are still $1.75 cheaper than SF, or to just be mad that I have to cough up eight bucks to sit in an uncomfortable chair and watch five Coke commercials and put up with text messagers for two hours).

For me, the Bourne series has gotten better as it has gone along. As much as I enjoyed the first installment, “Identity” has continued to pale in comparison to the subsequent films. Mostly I think this is because the first film had the burden of establishing the story, whereas the other two just got to run with it.

Too bad that wasn’t the case with all sequels.

Like “Supremacy”, then, “Ultimatum” benefits from an established background and rewards us with lots of chase scenes and intense action, mixed in with a bit of plotting here and there. Matt Damon does his cold ex-assassin thing as usual, dispatching bad guys (but not killing them) with efficient precision on his way to finding out what made him such a tough guy in the first place. He also keeps up his pattern of always wearing all black all the time, which as far as I can tell makes him much more intimidating and "assassin-like".

Now that he’s figured out who he is and apologized to the last remaining family member of his first victim, “Ultimatum” is all about recreating Bourne’s initial decision to enter the original program. Without giving too much away, it involves Albert Finney, who turns in a brief but stunning performance that further cements his place on my all-time favorite actor list (along with Gene Hackman, Christopher Walken, Alan Arkin, and several other entertaining old white dudes).

Incredibly, the third film manages to amplify the breathless pace and brutal (yet bloodless) violence even more than the high standard “Supremacy” set. A bathroom fistfight with another “asset” (insider code for “brainwashed dude who’s been turned into a black ops killing machine") leaves the viewer stunned, as well as Julia Stiles, who plays the sort-of love interest this time around.

Ideally, “Bourne Ultimatum” should be paired at the drive-in with “Live Free or Die Hard”. The latter is a great example of a fun over-the-top action flick with tongue firmly planted in cheek. The former is the same thing with less tongue. Both are a blast.

“The Bourne Ultimatum” is rated PG-13 for brutal fisticuffs (which means fist fights, I think), tons of broken glass and screeches, cold stares from Damon and 120 minutes of hand-held camera work.