Transformers
One star out of four

The first time they made a “Transformers” movie they killed off all the main characters and introduced a whole new line so parents would get stuck buying their kids new toys. It was a harsh introduction to the world of marketing, and sad to say, the brand-new CGI version hasn’t restored my faith. 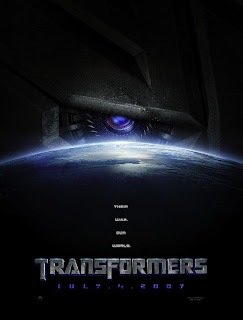 Thing is, I knew going in that I was paying for a Michael Bay film, which meant lots of slow-motion action, overly-dramatic music, dumb one-liners and an explosion/dialogue ratio of about 7 to 1. For a while it was fun, but after a point I just couldn’t take it anymore. Maybe I was just angry that they turned Bumblebee into a Camaro instead of a Bug, and Jazz into a Pontiac instead of a Porche. Maybe I was steamed that Soundwave looked like a tinker-toy version of the Terminator endo-skeleton. Or maybe it was just that I couldn’t buy the idea that a 20-year old cover girl blonde with heavy makeup (and an even heavier New Zealand accent!) could get a job as a high-security CIA analyst.

“Transformers” is rated PG-13 for tons of CGI violence, bad dialogue, a ridiculously scantily-clad leading “lady”, and the methodical alteration of most of what I remember about the “Transformers” of my childhood.

I’m betting that if I hadn’t read the book before seeing this movie (a first for me), I would have given it three stars. “Harry Potter 5” is a lot of fun, and well worth seeing, but after cruising through nearly 900 pages of source material, I wanted to see more than two hours and twenty minutes of screen time. 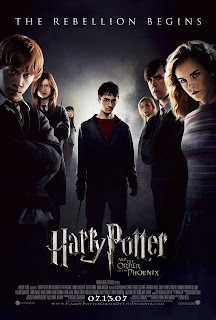 This is a perfect example of what’s in is good, and what’s missing could have been better. Part of the problem as well is that after finishing book five, I forged on into book six, and was more interested in seeing “Half-Blood Prince” on the big screen. Just have to be patient I guess.

One thing I will say, though, is that this is the first Potter movie I’ve seen where I enjoyed the back nine as much as the front nine. Usually I’ve enjoyed the first two acts, but lost interest by the time the obligatory good/evil showdown took place. This time the showdown fit the bill.

“Harry Potter and the Order of the Phoenix” is rated PG-13 for general moodiness and excessive British accents, not to mention some scary bits and periodic cringes every time you remember that Harry has a nude scene in some play he’s doing in England.


The Simpsons Movie
Three stars out of four

Confession time: I’ve probably only seen two or three brand-new Simpsons episodes over the last five years. From ’89 to ’95 I watched the show constantly, loyally, and kept on going for several years after returning from my LDS mission to Chicago. But in the last few years, I’ve gotten a bit bored with the show, and, dare I say it, suspected that I was seeing the same storylines played out in new clothing. 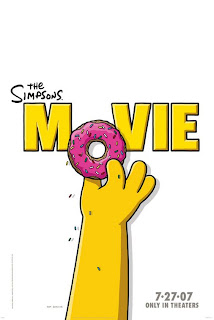 That being said, the movie more than delivers, and is worth the wait. Ultimately it’s nothing you can’t already see on TV, but if nothing but for the novelty, it’s worth seeing on the big screen. The writing may be getting a bit redundant from week to week in TV land, but Homer and the crew brought their “A” game for the movie.

For some reason, my favorite part of the movie is a quick clip of the "cat lady" rubbing a bunch of disoriented felines on a washboard next to a toxic-waste infested lake before tossing each in a laundry bin with the obligatory "mmrrew!". I really don't know why.

“The Simpsons Movie” is rated PG-13 for slightly amplified examples of the stuff that got half my parent’s friends to forbid them from watching the show back in 1989. Plus they show Bart’s animated wee-wee.


Live Free or Die Hard
Three stars out of four

In all seriousness, “Die Hard 4” may be the best movie I’ve seen this summer. And I’m not saying that because it’s been a bad summer. It’s just that good. 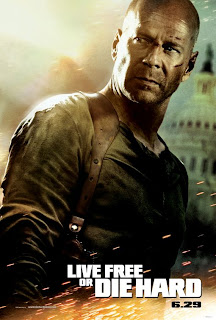 “Live Free or Die Hard” works best in the “Rundown” and “Walking Tall” category of films: movies you watch just because you want to see the lead guy beat up everyone in the room and destroy everything in sight. “Transformers” could have been that, but was just too stupid. “Die Hard” is certainly stupid, but the difference is it wants to be. “Die Hard” embraces stupidity, and revels in it. And the audience loves it.

It’s good to see Bruce Willis playing Bruce Willis in a character that is appropriate to the mold. I still don’t like it as much as his David Addison on “Moonlighting” (nor do I want to see a big-screen adaptation of “Moonlighting”), but it’s still a lot of fun. And without giving too much away, let me just say that in act three Willis may just out-Jack Bauer Jack Bauer.

Best part: I watched “Live Free or Die Hard” at a Drive-In. There was something undoubtedly American about the whole production. What a great night.

“Live Free or Die Hard” is rated PG-13 for non-stop mayhem, gunfire, explosions, mid-level profanity (except for the obligatory franchise catch phrase), excessive Bruno coolness and a touch of sorrow that they didn’t bring back Roc from the first movie to play a cop again.