The Comic-Con Experience, Chapter I: The Road to San Diego

If there’s one part of Americana that is deeply ingrained in me (other than Drive-In double features), it’s the classic all-American road trip. I’ve been a fan of road trips ever since I drove to Island Park with four friends the summer after I graduated from high school. Since then I’ve cruised the Pacific coast highway, driven to Chicago and back, and made numerous swings to Vegas and back.

That’s why the notion of driving to Comic-Con 2007 instead of flying didn’t deter me in the least. Even with gas prices as bad as they have been, a trip to San Diego would cost less than half as much in gas as it would cost to snag two airplane tickets for my sister Katie and I to make our destined pilgrimage to meet Ray Bradbury.

So about 3PM last Thursday afternoon I pulled into the parking lot of Equity Title in Salt Lake and picked up Katie after working a partial shift. The car was all packed and ready to go, and following a quick stop in Alpine to drop off a DVD of my Harry Potter piece to my producer, we hit I-15 and made for the southern horizon.

Our initial plan was to wait until Friday morning and drive all the way to Los Angeles on the first day, where we would stay with my old friend Fabian Jakins in the north LA suburb of Canyon Country. But at the last minute we figured it might be smart to break the jaunt in two and crash in Vegas with my longtime friend Steve and his family.

On the way down, we passed the sights I’d gotten used to seeing on the way through Southern Utah, and looked forward to getting into a state where people know they’re supposed to yield the left-hand lane. Other than a pickup truck packed to the rim with boxes of Hostess desserts (and a driver behind the wheel who honestly looked like he was passed out—at 75mph, no less), nothing too extraordinary crossed our path. It was just good music, good conversation, and open road.

In an effort to get past our usual habit of grumbling about dating and career frustrations, Katie and I tried to stick to more topical conversations. I suggested we come up with our five favorite vocalists, along with an explanation for each.

Finally around 11pm we pulled into North Las Vegas, and found ourselves relaxing on Steve’s leather couch while discussing the virtues of the latest Harry Potter book with his wife Sarah. Steve is one of my oldest friends. My earliest memory of him is the two of us watching “Gilligan’s Island” with another neighborhood kid—JC Lee—while sitting on a red shag carpet in my parent’s basement shortly after making the move from Centerville to Bountiful when I was four years old.

We spent much of the next several years playing Star Wars, GI Joe, and Transformers, as our interests gradually evolved from outer space to basketball to girls. We even got our Eagle Scouts together: 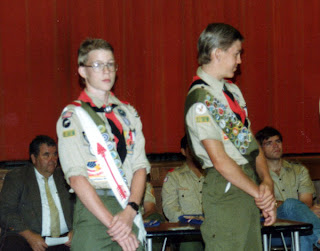 After graduating from Southern Utah University, Steve moved down to Las Vegas with his new wife Sarah and started having energetic kids. These days they’ve got three of them, and the last two times I’ve been down to see them, watching the kids has been as entertaining as anything else I did on the trip. 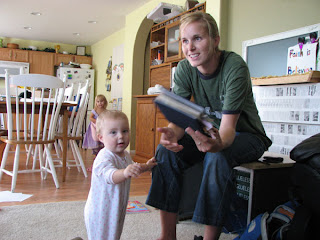 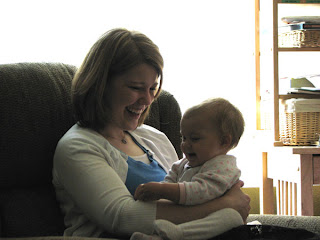 Instead of doing anything inherently “Vegas”, Katie and I had lunch at a local Mexican restaurant named “Viva Zapatas” the next day before hitting the road again. Zapatas was a good spot, partially for their good salsa, partially for the restaurant décor, which consisted mainly of guns hung on the wall.

We’d already endured a lot of hot weather on the way down, but as we drove south out of Nevada, things went from bad to worse. In the Death Valley area, Sunny California boasts a landscape that is far from anything the Mamas and the Papas would ever be dreamin’ about. Long stretches of desolate rolling terrain, peppered with sage brush and the odd Joshua Tree, eventually rises into mounds of dirt and rock that I suppose would be considered mountains. The God-forsaken environment looked a lot more like a desert than the place I grew up at, in spite of what people told me. 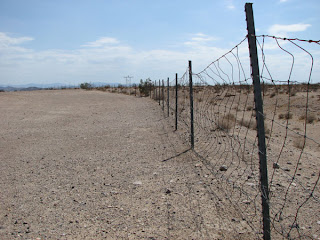 After a quick rest stop, things just got weirder. Eventually we started to pick up elevation, and I figured that soon we would cross over into the beautiful paradise so many native Californians are always bragging about. But MapQuest had other ideas.

Once we reached Victorville, our directions took us off of I-15 and onto a rural highway headed due West. Palmdale Road eventually turned into Peachtree Drive, but the scenery remained the same: a long two-lane highway with almost nothing but dirt roads peeling off of it. Hand painted address signs tacked up next to the entrances to obscure trailer parks and ramshackle houses, and everywhere sagebrush, dirt, and dust. For a long time we questioned whether we were going in the right direction, but eventually we met up with the southbound Highway 14, and found ourselves on a much busier highway heading south towards Los Angeles.

Around 6pm we hit Canyon Country, and after unloading our bags at my friend Fabian’s place, we found ourselves in an In-and-Out Burger Drive-thru getting burgers and fresh fries. 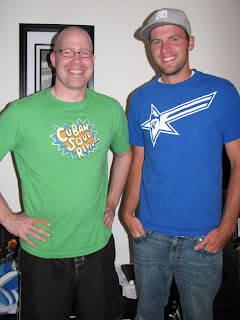 Fabian and I got to be friends while attending the 32nd Ward together two years ago. We both have an interest in film, so we spent the evening watching each other’s recent short film projects before Katie and I decided to crash on his couches around 11:30.

Following a borderline-miraculous rise from bed at 4:30am, Katie and I got our stuff together and got onto I-5 for the last leg of our drive to the conference. People drive very fast on southern California freeways, but at least there weren’t many of them out that early on a Saturday morning, and by 8am, we arrived safely at Qualcomm Stadium, home of the San Diego Chargers and the Green Line stop of the San Diego Trolley System. 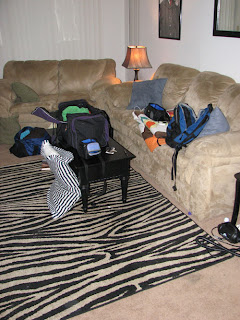 Qualcomm Stadium was serving a double purpose that day: hub for Comic-Con folks, and headquarters of American Idol auditions. As we stood on the dock waiting for the train, Katie and I looked out at the crowds in line to get ripped by Simon, and wondered what our lives would have been had we been steered onto that path rather than the one we were on.

Maybe they really aren’t all that different. 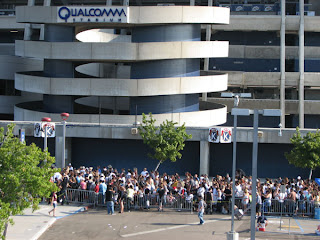 Posted by The Professor at 4:44 PM