Juror #39 has left the building

For most of my life, Jury Duty was one of those running gags that other people had to deal with, like death and taxes. Technically I always knew it would be a possibility, but so was getting called out of the crowd to play point guard for the Jazz, so I dismissed it.

Then late last spring I got my first call to duty. I wasn’t thrilled with it, but at least I figured I could probably work it in, since I was just about to walk away from my “regular” full-time job and start a freelance run.

The first call turned out to be a false start: my assigned case never went to trial, and the nice recorded voice on the Frank E. Moss Courthouse answering machine told me they’d try me again down the road. Then two weeks ago they nailed me again, and this time I actually had to show up.

I started to feel the ambivalence of jury duty: the feeling of obligation to one’s country clashing vehemently with the selfish desire to be left alone. Every experience I’d had in court was a negative one. After Judge Jensen passively charged me forty bucks for driving across Smoot Park on Prom Night when I was seventeen, I’d never been given any slack in traffic court. Plus I hated “Matlock”.

According to some of my lawyer friends, I still had a good chance of squeaking out of duty, though. My friend Nathan told me he’d never put me on a jury, because I’d over-analyze everything. Plus they always called in about four times more people than they needed, so the numbers were on my side, too. 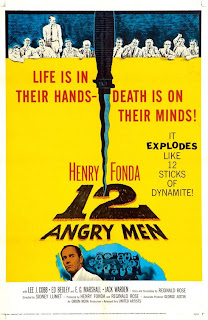 Finally last Tuesday morning I showed up at the courthouse, resigned to do my bit if called on. I was reminded of Jack Warden’s character in “12 Angry Men”, the guy with baseball tickets that wanted to rush through the deliberation so he could make the opening pitch. I wondered if viewing that film in every English 2010 class I taught would make the lawyers hesitant to get me on their jury.

I toyed with some remarks I might use to rile things up a bit:

“Your honor, I believe in true equal opportunity under the law. I am prejudiced against all races, creeds and classes equally.”

“I would never trust any lawyer with a goatee, and especially one who advertised on the cover of the phone book.”

"If we vote in favor of the death penalty, can I stick the execution on my YouTube page?"

But once I arrived, I knew I didn’t have the heart to use them. From the time I arrived at the front security check-in, I was overwhelmed by how graciously everyone acted. Even the security guards seemed to be grateful that I was taking time out of my “busy” day. The orientation lady practically gushed over our willingness to show up, as did all the bad actors on the orientation video.

Most surprising of all, the judge himself bent over backwards to tell us how good we were to come down, and how grateful he was for our different sacrifices. Besides Judge Jensen, every traffic court judge I’d ever met looked at me like I was a worm, though after sitting through the few cases I’d heard before me, I could hardly blame them. But this guy was actually happy.

We’d all been assigned juror numbers before entering the courtroom, and after briefing us on the circumstances of the case, Judge Kimball had us all stand up and introduce ourselves, so he and the attorneys could get a feel for whether we’d be good jurors. It was a broad cross-section of mainstream America, though surprisingly at #39, I was the first person of the group to have a graduate degree.

Since the case involved law enforcement testimony, I told the lawyers during the side bar that I’d been teaching firefighters for two years. But it turns out that even that didn’t matter, because when the Judge read off the names of the winners, they all came from the first twenty in line. They never would have got to me anyway.

So five minutes later I walked out of the building with the other “thanks, but no thanks” folks, not sure whether I should be happy to have gotten out of the case. I was grateful that I still had most of the day to get some work done, but at least I felt that I would have gone through with the task if called on. Jury Duty still didn’t sound like a fun option, but it was good to know the people involved were so understanding about all of it.

Judge Jensen would have been proud.
Posted by The Professor at 1:21 PM