The other night I was driving home from a Jazz game with my buddy John when we started debating who was crazier: Dennis Rodman or Ron Artest.  Rodman's NBA career was legendary in the "crazy" department, for his hair alone.  But there was always the suspicion that he was just playing a role for attention. 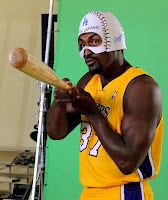 Now, Artest on the other hand...well, let's just say that if I were a betting man, I'd put my crazy money on the guy who charged into the stands to throw down with drunk Detroit Piston fans.

Turns out that the Lakers' newest boxer-clad shooting guard has a blog.  When I learned this, I immediately added it to my roll, just on the slightest chance that it may feature a quote like this:

(referenced by Basketbawful after a recent game against the Houston Rockets)

"Well what happened was…obviously I didn't know his shoe would come off that's the first thing conservative reporters. I didn't know his shoe was gonna come off. I don't speak to his feet so I don't know what his feet are thinking, I don't know what his toes are thinking, I don't know what he’s thinking. Then his shoe comes off and I'm like okay a shoe is not supposed to be on the basketball court without somebody standing inside of it. So I said alright, I'm just gonna buy me some time. I really didn't know whose shoe it was, but I said it has to be one of the player's shoe. As soon as I toss it off the court, not throw into the stands which some people said, it'll buy me some time. What happens is I come back down, Trevor is trying to put his shoe on and I politely hit a three in his face."

Wow.  If that's any indicator of things to come, then I am thrilled for the future.  Let the good times roll.
Posted by The Professor at 11:25 PM