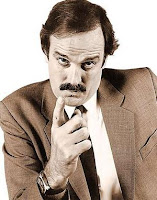 Early this morning, sometime between the moment I reached up to turn off my alarm and the moment where I actually regained consciousness, I dreamed that John Cleese was hanging out in my parents' living room.

I don't remember much of the incident, outside of a couple of minor--yet intriguing--details.  I remember that he wore a single gold hoop earring, kind of like a pirate.  I also remember that at one point he pulled out a copy of the Bible and sang the 8th Psalm.

Yeah, I know...doesn't make sense to me, either.

What does make sense is that the idea of meeting John Cleese has been knocking around in my subconscious.  In the last three years, I have met two of the most important creative muses of my childhood, and if I were to pick a third, it would probably be Cleese.  (With honorable mention going to Dan Aykroyd.)

I think most of my regular readers are familiar with Cleese, but for those of you who arrived at my blog from Asia after Googling "Mongolian Death Worm," John Cleese was one of the infamous Monty Python boys, the comedy troupe that brought us "Monty Python and the Holy Grail."  They were the Beatles of British Comedy.  He also played Nearly Headless Nick in the Harry Potter movies.  If Ray Bradbury fostered my love of writing and George Lucas fostered my love of film, Cleese did it for comedy.  Heck, I named this blog after a Python sketch.

Actually, maybe his rendition of the 8th Psalm does make sense.  As I think about it, Cleese is partially responsible for one of the fondest memories from growing up in the Bountiful 19th Ward, the wonderful day Rob Nish played the Python TV theme on the organ in Sacrament Meeting.

So I guess there is a connection after all.  If I ever do get to meet Cleese, I'll have to tell him the story.  I'm sure he'd appreciate it. 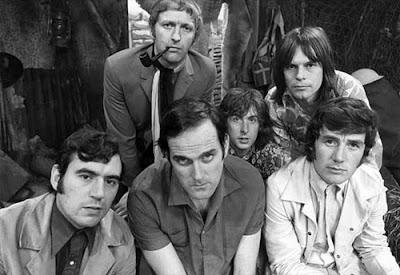 Posted by The Professor at 9:46 AM