Just wrapped up this semester's run of English 1010 classes this week.  As has become tradition over the years, I capped off the experience with an in-class extra credit game, where I mix questions from the course with random questions from popular culture to give my students a chance to scrape together a few last-minute points and hopefully show me that they learned something over the last three months.

Tuesday night, as we were just about to jump into the big event, one of my students raised his hand.

"There aren't going to be any questions about comic books, are there?"

"No," I answered, puzzled.  "Why would you worry about that?" 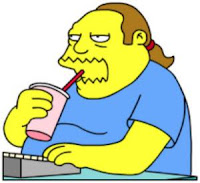 A short discussion and a raise of hands later, it was revealed that a good portion of my students were under the impression that I was some sort of Comic Book Geek, probably because earlier in the semester I had told them the story of how I drove to San Diego to see Ray Bradbury at Comic-Con 2007.  But I hadn't made so much as a passing reference to anything comic book related before or since.  I had made plenty of pop culture references, and had gone so far as to use clips from "Raiders of the Lost Ark," "Saturday Night Live," and even "The Texas Chainsaw Massacre" to illustrate points in class, but I'd never crossed over into Comic Land.

The brief episode fed fuel into a concept I have been mulling in recent months, an effort to define some kind of a definitive Nerd Spectrum.  I think most of us have embraced some aspect of nerdiness in our time, but endorsement of one category doesn't necessarily presume experience--or even interest--in all of them.  For example, I have waited in line to see a "Star Wars" movie, but I haven't purchased a comic book since I was seven years old.  I wear glasses, but I have never played in a marching band.  I occasionally play Tetris on my cell phone when I'm bored, but I'm so bad at video games that my friend Tyler has been known to force me to play Mario Kart just so he can make fun of me.

I think a true measure of personal nerdiness requires a specific examination of multiple categories, rated individually by depth of participation and weighed against compensatory factors like serious relationships and the number of girls you have kissed.  (Of course, if your only serious relationships come via "Second Life," your Spectrum Score would only increase.)  I have a few ideas about how to break down these categories, but working out the details of such a project will take some time.

Luckily, as a nerdy guy, I should have plenty of time to do so.
Posted by The Professor at 11:10 AM