As much as I love music, I've always been more of a private dancer.

(Wait, that sounds kind of bad when I see it in print...)

Um, it has been well-documented that I love music, but when it comes to getting down with my bad self, I prefer to do it when I'm not around people I know. 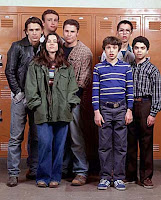 OK, how about this: I am a wallflower.  I always hated school dances.  They always seemed like a great idea at the time (the Girl's Choice concept seemed even better), but the reality never quite delivered.  Whether it was a formal dance or a spontaneous victory Stomp in the gym after a big win for the basketball team, my MO was always the same: stand around the perimeter of the event, maintaining consistent conversation with friends and periodically rotating around the gym to create the illusion of involvement.

This reliable routine would be shattered three or four times per event, when the upbeat tones of hip-hop or country swing would fade and the unmistakable opening chords of a slow song would rise above the crowd.  At these moments, my heart would become a train wreck of conflicting emotions: the desire to remain anonymous, the desire to dance with a girl I was into, and the desire to bolt for the door before someone I didn't like pinned me into an awkward five minutes of slow dancing.

Over the years, a number of slow songs gained iconic status for these signature moments.  The strangest was probably "Stairway to Heaven," which I'm convinced local DJ's only played as a joke because they knew that halfway through the epic ballad Jimmy Page would kick in with a nasty guitar solo and leave the gym floundering in confusion.  But of all the classic slow dance tracks, only three can qualify for the Unholy Trinity:

The funny thing about the Unholy Trinity is that I actually like two of the three songs.  As one might imagine, this is the one I don't like.  It's bad enough to have your raging hormones battle it out with your fight or flight instinct while something benign plays overhead.  It's an altogether different experience when Garth's twang is threatening to give you seizures.

Of all the iconic anthems written by the band who best represents my generation, this is probably the biggest.  And a good part of that status comes from school dance airtime.  It's hard to think of an opening bass line that is easier to recognize within 1.07 seconds.  Even non-music people recognize it.  The best way to hear this one is to see U2 play it live, cause you get to see Bono drag some hapless girl up on his jogging ramp to give her the ultimate school dance experience.

It would truly take a monster to outdo U2 for the top spot, but I think most would agree that this is the track that would do it.  "Right Here Waiting" may have shone brightly in its time, but Alphaville's signature tune kept right on trucking through the 90's and into the 21st Century.  "Forever Young" has truly risen to school dance immortality.  Its cameo in "Napoleon Dynamite" may have been the most underrated moment of the entire movie.  Unlike most of the bands associated with slow dance anthems, I couldn't name a single other track from this group,* but even if most people only see them as a one-hit wonder, Alphaville's place in music history is secure.**

My angst-ridden conflicted hormones wouldn't have it any other way.

*I know someone who can, though; earlier this semester I asked my students to name their favorite band, and one of them actually tagged these guys.  I laughed out loud.

**My favorite Alphaville story: About four years ago my roommate and I dropped by the Sunnyside Chapel in Salt Lake for our student stake's annual "Music in the Park" activity.  Typically these events are stacked with a series of mellow acoustic acts who don't realize that the subtle passion of their original folk tunes is going to be wasted on a half-interested throng of 300 LDS singles who are more concerned with scoping the crowd for members of the opposite sex, shooting the bull with friends, or grazing fresh fruit from the refreshment table.  But this time a brave soul sauntered out with a portable keyboard and pumped out a solo take on "Forever Young" that would have brought a tear to my eye if I were still capable of crying.  In the wake of his brilliant performance, my roommate--born in the proud class of '75 and a certified child of the 80's--offered his complements:

"That was awesome, man.  Way to rock the Alphaville."

"Thanks, man," replied the musician, "I'm just glad someone recognized it."

These are the little hints that tell you it might be time to leave the singles ward.
Posted by The Professor at 12:09 PM