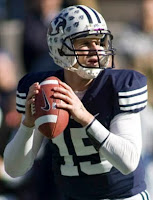 Funny thing is, even wilting passions can get worked up when someone's feeling picked on. A persecution complex can be a powerful thing. Just ask Michael Jordan.

I know that you're familiar with the persecution complex, Max. After all, we're both Mormons. Our people got chased out of three different states long before you or I were born. It's pretty much ingrained in us. I feel it whenever I read the Salt Lake Tribune. I feel it whenever the Jazz play the Lakers. Heck, when I was a kid I felt it whenever the 19th Ward played the 53rd Ward in church ball.

There's nothing wrong with feeling persecuted, but how you deal with it says a lot about you. You can't let your complex get the best of you. When you stood up there in front of all those reporters and told everyone how the Ute organization was classless, well, you looked like a jackass. You won the game, Max. That should have been statement enough.

Don't get me wrong, I can understand why you might feel a little persecuted by the University of Utah and its fans. Honestly, I felt kind of bad for you when everyone made fun of all those interceptions you threw last year. And if it's true that some of us poured beer on your folks, that definitely wasn't cool. Nobody blames you for feeling vindicated.  Still, even as a U fan, I don't think all BYU fans are bad any more than I think all Ute fans are good, and I can tell you, you embarrassed a lot of good BYU fans. 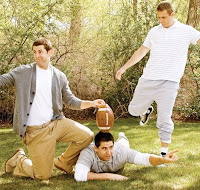 I don't know, maybe it was the media's fault. Maybe that's what we get when we stick a microphone in someone's face seconds after the biggest game of their life and ask them to put it all in perspective. That's what was so funny about Jordan. The guy had years to put his career in perspective, and he still came off like a jerk. Maybe with a some time you'll pick up a little more grace. I know I wasn't a bastion of wisdom at your age.

Truth is, I should probably be thanking you. For a second there, you made me proud to be a Ute.
Posted by The Professor at 11:09 AM