Several years ago I watched "The Elephant Man" alone in my basement on a Saturday night. I'd rented the film over at Hollywood Video, and while I was waiting in line I ran into an old high school friend who had been married for about a year. As I spoke with him, I realized that I was at my social nadir, much the same as I believe my dating nadir came while trekking across the BYU campus one fall night and getting recruited by the Amway of financial planning.

But that's another story... 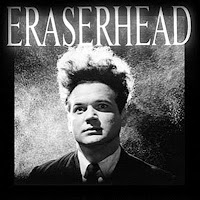 "Elephant Man" was a good movie, even if the circumstances surrounding my viewing were less than desirable. Last night I watched "Eraserhead", another David Lynch film, this time under better social circumstances: I had a roommate and my buddy Jared in tow. And that's about as many as I figured I could get away with, because in spite of how many film-enthusiast friends I have, I doubt there are many who could make it through "Eraserhead."

"Eraserhead" isn't a dirty movie. At it's heart it's just a surrealist interpretation of Lynch's anxieties regarding fatherhood. There is no profanity, no nudity, and the violence is minimal. Plus there is a main character who boasts a six-inch flattop. But it is pretty disturbing, and most moviegoers wouldn't last five minutes without getting bored or seriously creeped out by it. Nevertheless, there is something undeniably fascinating about the film, and I wasn't the only one in the room last night who felt that way. About ten minutes in, my roommate Dustin-a pilot for Skywest-remarked:

"This makes me want to make a film."

The movie was unquestionably weird, but it was so creative you couldn't help but be inspired by it. People say that when the first Velvet Underground album came out in 1966, hardly anyone bought it, but everyone who did formed a band. I'd say "Eraserhead" has the same effect.
Posted by The Professor at 6:27 AM