Last week I dropped my car off at the Wal-Mart auto center for an oil change while my dad and I walked over to Chili's for an early lunch. An hour later, I returned to find a cute blonde with a nose piercing behind the counter.

"We are obligated to tell you," she said, "that your tires are legally bald." 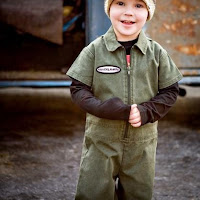 There are few things I find more horrifying than dropping my car off for a routine service check. I'm always paranoid that at some point in the experience, some concerned-looking individual in coveralls will emerge from the work bay wiping grease off his hands with some nasty rag and give me a look that suggests he's about to tell me tragic news.

"Sir, while I was installing your new oil filter I couldn't help but notice that your CV-Joint Intake Manifold O2 sensor bolt was corroded on the right side. Were you aware of this?"

I attempt to look thoughtful, then shake my head.

"If you don't get that fixed, your engine will explode roughly fifty yards from our location. It's very lucky we found the problem when we did."

"Well," I say, trying to sound like a hard sell, "I guess you better go ahead and fix it. How much is it going to cost me?"

"Well, the screw itself is a pretty small item. The trouble is, the way your car is designed, we're going to have to remove the engine block, the driver's side door, and most of your car stereo to get to it. Plus Honda decided to make the bolt out of a special alloy that is only found on the planet Vulcan, so you're looking at about $750, give or take."

What drives me nuts about face-offs with auto guys is that I have no ammunition. They could tell me pretty much anything and I'd have to go along with it. If they told me that a pack of miniature Howler Monkeys had taken up residence in one of my pistons, I couldn't really tell them otherwise, because outside of re-wiring my car stereo, I know next to nothing about the operation of my car. No one these days does.

It's not like I could stare down the mechanic and declare, "what kind of crap are you trying to pull here? I know for a fact that Howler Monkeys are only partial to GM pistons, and never take up residence in Japanese engines because of the different lubrication methods. Do I look that stupid?" (sound of me slapping mechanic with set of white polo gloves)

So the blonde made me sign a form acknowledging that she'd told me about my tire situation. Now I can't sue Wal-Mart if I kill a pack of innocent bystanders on a Segway Tour of downtown Salt Lake City this weekend. I should probably go buy some new tires, though. Just to be on the safe side.

Hopefully the tire people won't find anything else wrong.
Posted by The Professor at 9:44 AM