It's nice when life offers you a new twist on an old friend, especially when the new twist doesn't cost you anything. Right now I have many such twists in my freezer.

I'm referring, of course, to the delicacy that is the frozen grape.

Few discoveries in my life have come with such eye-opening dynamism as the Revelation of the Frozen Grape. I first encountered this phenomenon while serving as a semi-humble LDS missionary in Freeport, Illinois during the summer of 1996. Midway through a visit with Brother Rice-my own personal Doc Emmitt Brown-my friend emerged from his kitchen area with a bag full of the icebound fruits, and my perspective on eternity was changed forever.

What I found most surprising about the frozen grape is that it never entirely freezes. Even after hours in sub-zero temperatures, the consistency of the grape prevents it from completely solidifying, thus affording the consumer instant satisfaction without having to wait for a thaw.

What I found least surprising about frozen grapes was that Brother Rice introduced me to them. Our visits were often filled with such mind-expanding altercations, whether he was telling us stories about how he playing bass for Dick Dale and the Deltones back in the 60's while living in a school bus on a beach in Hawaii, or whether we were debating his theory that as resurrected beings we won't require clothing, since temptation won't exist in the eternities. Our debate was inconclusive, but I'm sure his theory would have come as great news to my future companion Elder Clark, who spent part of his childhood in a nudist colony before coming to South Chicago to get hit by cars three different times in the summer of 1997. 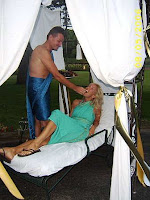 I don't know if it was his intention, but if there is one lesson I can take from the Brother Rice's humble offering, it is this: while frozen grapes may not be rock-solid, their texture is still altered sufficiently to slow the progress of the consumer. Instead of plow through a bag, one must savor each grape independently, giving it his or her complete attention. I submit that we treat life this way, taking the time to smell the roses, note the sunsets, and appreciate the miraculous power of the dryer sheet.

You never know, the day may come where we don't need them.
Posted by The Professor at 7:30 AM