...and now for these messages

When I was a little kid in the midst of my own personal Beatlemania, I remember a lot of people being steamed because Nike had decided to use a Fab Four song to advertise their new line of basketball shoes. Something about using a socially-conscious anthem for a cheap commercial use, I believe. I think the affair also played a part in breaking up this particular bromance, since Jacko owned the publication rights that let Nike get away with it. 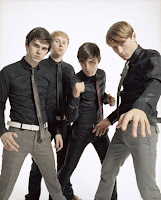 I can see the purist frustration of using a "noble" song like "Revolution" for a base effort like pimping sneakers, but last night I was pretty happy about the use of mainstream rock in TV commercials. If it weren't for a Sony PSP ad from a few years ago, I never would have heard of Franz Ferdinand, and thus I wouldn't have wound up down at the Avalon Theater last night to see 90 minutes worth of sweet blaring swagger-strut rock out of Glasgow. Wouldn't have seen the whole band plus a roadie gather around Paul Thomson's drum kit to finish off "Ulysses" with a five-man percussion jam. Wouldn't have done the Pogo for the second time in a week (the first was during "Why Does It Always Rain On Me" at the Travis show).

Maybe it has something to do with the fact that the PSP ad introduced me to a band, but the Nike ad defiled an established act with strong emotional ties to a conflicted era. Maybe, in that case, the commercial use dilutes the power of the song and contributes to the capitalist corruption of pure art through the commercial obsessions of cheap popular culture. Maybe we've just got more important things to worry about.

...like whether I'm going to go see The Horrorpops on Friday.
Posted by The Professor at 9:18 AM