Last Saturday afternoon, after an epic battle with the overgrown expanse of grass around my house, I noticed an old friend hanging out by my back door.

My old friend didn't say anything back. That's because my old friend was a Box Elder Bug, and to my knowledge is incapable of audible communication. For some reason, I have held a strange affection for Box Elder Bugs for several years now. Part of it is due to the fact that I attended Utah State University, where they are known to hold a heavy population, but I think another part of it is because Box Elder Bugs are so much more non-threatening than other bugs. For example, no Box Elder Bug has ever tried to bore a hole in my abdomen and reproduce itself 10,000 times over.

(Note: no other bug has ever tried to bore a hole in my abdomen and reproduce, but I wouldn't put it past most of them to try. I have heard of such horrible things, and this is one of the primary reasons I avoid Central America.) 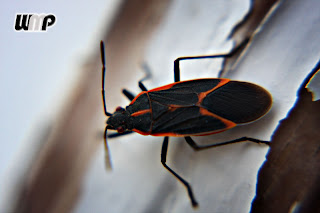 Box Elder Bugs seem to be the pot addicts of the Insect World. Most of the time they seem content to just hang out. They don't move real fast, and when they try to fly, it's actually kind of funny. When I saw the one resting on my door frame, I ran downstairs to get my camera, and when I came back, he was still just hanging around like nothing was going on. I even stuck my macro lens in his face, and he was totally cool. 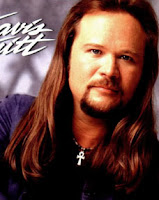 I looked Box Elder Bugs up on Wikipedia, and learned that their real name is Boisea Trivittata, which suggests they may hail from Idaho, or they are named after Travis Tritt. I know there are tons of them in the Ray B. West building on the USU campus. They'd also do well in 1970's discos, because apparently they mate in groups of three or four at a time.

Sadly, most of the Wikipedia article was filled with information on how to kill these dudes, which seems excessive since they are so laid back all the time. Like I said, the one I hung out with Saturday stuck around for a full five-minute photo session before he had to bail.

"No problem, thanks for hanging around," I said. "You got a hot date?" 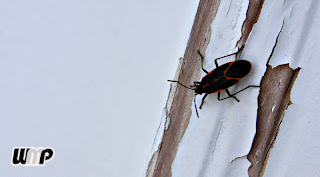 Posted by The Professor at 7:31 AM