The Dark Knight takes a Back Seat

The highest compliment I can pay "The Dark Knight" is to say that Heath Ledger made me want to act again. As much as I love Jack Nicholson's turn as The Joker in 1989's "Batman", I'm afraid Mr. "Here's Johnny" just got his behind handed to him with extreme prejudice.

At the same time, Ledger's performance as the Joker might also be "The Dark Knight's" tragic flaw; it's so overwhelming you forget that there is anyone else in the movie. And aside from a few exceptions, few of the other actors do much to make their presences felt.

Christian Bale's Batman may take a backseat to Ledger everytime they're on screen together, but at least he's got plenty of cool action scenes to keep him busy. Gary Oldman does a great job playing an understated Commissioner Gordon, but that's actually kind of sad, considering Oldman's talent (see "The Professional") and the number of crazy characters in the Batman universe he could have played. The most disposable character of all is Maggie Gyllenhall's Rachel Dawes, who doesn't have much of anything to do, yet is supposed to be one of the prime motivations behind the events of the film's third act. 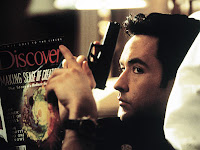 But in a movie like this, a few underused characters don't make a huge difference. Overall "The Dark Knight" was a blast. Unlike some recent films (Indy 4!) the action was incredible without being unbelievable, the acting was fantastic, the story/plot was a lot of fun, and the movie was packed with the kind of memorable moments that separate the great movies from the throwaway ones. Let's just say the first act features the best use of a writing utensil since John Cusack got that pen from the lawyer in "Grosse Pointe Blank".

Still, any long-term evaluation of this movie is going to start and end with Heath Ledger's Joker. People have asked me if I thought his performance is magnified because of his death earlier this year. It's not. It didn't need it. And that makes it all the more sad that the guy died. I'll be the first to admit that I was skeptical when I first heard that he was cast; to me he was just the "Knight's Tale" guy. Now I know better. 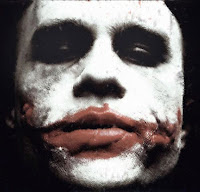 That being said, people should know that Ledger what is doing such a great job of is portraying a fully depraved merciless sociopath. This is one dark movie. Little kids shouldn't see it (that's what that PG-13 is for, remember?). Jack Nicholson's Joker was definitely a bad guy, but as macabre as Tim Burton is, he's not nearly as dark as you'd think. Nicholson's character was comic in a quirky way; Ledger's is comic in an unsettling way.

A lot of this comes from what has made the new Batman movies so effective. They are a deliberate attempt to portray a superhero scenario in a real-life context. Everything that happens is connected to some kind of plausible reality. There are no unexplained super-powers. Everything unfolds as it would in the real world. That's why it's so jarring; there's no surreal gloss to separate you from the story. It's unquestionably real. Unfortunately, it also makes Batman look a little silly whenever he shows up in the light of day, because, well, he's some dude standing around in a bat outfit in the light of day.

But like the Tim Burton movies, these new Batman films also draw their audience by playing the outsider card. These are movies about misfits, and few of us have never felt like misfits before. Granted, we don't all dress in black and wear eyeliner to the opening of "Nightmare Before Christmas", but the outsider oddball theme isn't a hard one to sell to a broad audience. These may not be characters to aspire to, but they are easy to relate to.

"The Dark Knight" is rated PG-13 for lots and lots of brutal (but not bloody) violence, some extremely morbid makeup (and not just The Joker), the pain of watching a Lamborghini get totaled, and one seriously ill-tempered pencil.
Posted by The Professor at 2:10 AM