The last morning we spent in the Loop, Randy and I decided to do some shopping on Michigan Avenue, since he felt that my unique fashion sense might have something to do with my perpetual single-hood. Our hotel connected to a rather large mall just off Michigan that boasted a wide array of stores, including one where they sell exfoliating soap made out of Dead Sea Salt. As in, salt from the Dead Sea. The soap didn't help me with my wardrobe, but the clerk was a cute blond, and so I got a bit of flirting taken care of.

Randy and I were also hoping to go check out the observation tower at the top of the Hancock Building (so named for the Declaration of Independence guy), but as we approached the big glass doors that led out to Michigan Avenue, we saw a lot of rain coming down outside. Discouraged, we stopped and pondered our next move.

"Is that George Lucas?" I asked incredulously.

As he recognized the stunned look on my face, Randy picked up his video camera and began filming the man as he walked away, hand-in-hand with his apparent girlfriend.

I was almost 100% positive that it was Mr. Use-the-Force himself--the outfit was a dead giveaway--but it seemed way too weird to see him in some random Chicago mall. Wasn't this the creative hermit that holed up on that huge northern California ranch all the time? Plus I couldn't believe that no one else had noticed him. No one there gave him a second glance. I would have thought that the guy behind one of the highest grossing and culturally influential films of all time would turn a few heads. Yet Lucas wandered through the mall like any other short middle-aged midwesterner.

"You going to go talk to him?" asked Randy.

"I don't know," I said. "I don't think he's the kind of guy who wants to be approached in public. I'm almost afraid he'd throw me to the ground and taze me."

We watched him go, and for a few minutes I stood there in a weird stupor, still wondering if I should try to meet him. At the age of 31, chasing celebrities in a mall seems a bit beneath me (though driving to San Diego to see them at a comic book convention is entirely plausible). But this was the guy who inspired me to be an artist as a kid. That little universe of his inspired me to draw, write, film, and pursue all sorts of creative outlets for as long as I could remember. "Star Wars" came out about six months after I was born. It has had some kind of presence throughout my entire life.

"All right," I finally determined. "I've at least got to shake this guy's hand."

So Randy and I set off through the mall, hoping we could still track him down. I wasn't going to bug him for a picture, or an autograph; I just wanted to meet the guy. After covering the first floor of the mall, we made our way into the second floor of Nordstrom and saw him trying on an overcoat. Randy and I pretended to look at some ridiculously overpriced dress shirts (seriously...$300 dress shirts) and waited for him to finish browsing.

"Can I help you find anything?" asked a saleswoman.

I couldn't believe it. Did anybody recognize this guy? 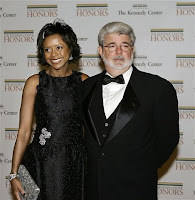 Finally George finished up his coat-shopping and started down an aisle with his girlfriend. So in true stalker-like fashion, I stepped out in front of them.

George and his girlfriend stopped cautiously. Close-up, I now realized that 1) this really was George Lucas, 2) he's kind of short, and 3) he really does look like my dad.

"Um...you're George Lucas right?" I said as un-nerdily as I could muster.

I stuck out my hand.

"I don't want to bother you or anything," I said, "but I just wanted to say thanks." 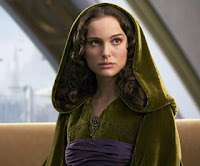 He smiled politely while taking my hand, then started away with his woman. I started to mumble something about not wanting to bother him again, because there was really no way to say "I've loved your movies since I was a child and 'Star Wars' changed my life and I really dug 'American Graffiti' too and I hope that someday I can have a '32 Deuce Coupe Hot Rod just like John Milner and I really enjoyed the prequels even though they leaned way too much on CGI which I think is still problematic at this point in the evolution of animation but hey you just have to do the best with what you have to work with right so if you ever need anyone to write a script or anything for you let me know and do you have Natalie Portman's phone number" in a concise way. But the encounter was over. It was was polite and anti-social. Pretty much what I expected, but without the tazer.

"I feel like a complete idiot," I told Randy over and over for the next hour. I couldn't believe that at 31 I was getting all giddy over meeting the second most successful nerd of all-time (Bill Gates being #1). 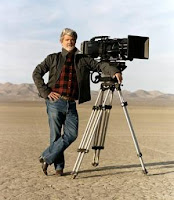 "I don't know Josh, maybe I'm wrong about the clothes thing," said Randy. "George Lucas goes around in a striped shirt and jeans, and he manages to date a girl half his age."

"George Lucas is a billionaire who made 'Star Wars'," I replied.

We wandered up to the Gap and Guess. I tried on some stuff, but I didn't buy anything. And Randy wouldn't let me buy the Brian Urlacher jersey. Looks like the ladies are still going to have to wait a while.
Posted by The Professor at 2:15 AM