Once I was done going to blues clubs and eating deep dish pizza and meeting George Lucas, the last task for my Chicago trip was to swing out to Freeport and visit some old mission friends. Freeport, Illinois is a small community of about 25,000 people, located about 2 1/2 hours west of Chicago, or 3 1/2 if you miss the turnoff onto Highway 20 and wind up in Wisconsin before you realize your mistake. 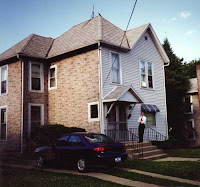 Unlike my other mission areas, which were in places so geographically flat I could measure the Earth's curvature from watching approaching traffic, Freeport sits amid the rolling hills of northern Illinois, surrounded by dairy farms and corn fields, and while it still doesn't boast anything resembling a mountain, it is still a gorgeous place to visit. I was transferred there during a rainy stretch in early June, and the place was so green and lush that I wondered if I'd really been sent to South America.

Of course, I didn't make my pilgrimage out to Freeport for the scenery. Of all my mission areas, Freeport is the one I've maintained the most contact with in the years since my release. Many of my old ward friends are still in the area in spite of a struggling local economy, and shockingly, most of them still recognized me when I returned with my dad two summers ago to visit.

I think part of that has to do with what I love about the mission field: the relationship between local members and missionaries is closer. You spend more time together, and create stronger long-term relationships. I think the wards themselves are tighter-knit in the field as well. I don't necessarily think the members are stronger (note to self: add "people who crab about Utah Mormons" to "Professor does not dig" list), I just think that in the field being LDS makes you more unique, and thus more likely to be close with your fellow ward members. I had plenty of friends in my ward growing up in Bountiful, but I didn't really depend on them for any kind of spiritual security, since all my friends at school were LDS, too. Plus the missionaries assigned to my home ward only turned up every few months. So when you add it all up, I guess it isn't super-surprising that people in Freeport still remember who I am.

Randy and I made the drive out west in a Chevy HHR, which for some reason is listed as a standard-size car by Avis Car Rental. The HHR is the Chevy version of the PT Cruiser, which is best described as a blubous station wagon that gets lousy gas mileage without offering any of the benefits of an SUV. Our HHR was a stylish black color, but if you put a booger in a nice frame, it's still a booger.

We were fortunate enough to stay with half of the Reid family, which is like staying with all of a normal-sized family. Randy and I were very grateful for their hospitality and the fact that they didn't make us hide our car in the bushes, especially because we arrived about two hours later than I had told them to expect us. Thanks to some hangups getting from the Blue Line to Avis, combined with my little Wisconsin detour, we weren't able to fulfill one of my long-held life goals, which is to visit the Sky-View Drive-In off Highway 69 south of Monroe. Every time my companions and I would trek between Freeport and Monroe (the other major city in the area), we would pass this little pocket of trees that surrounded an old Drive-In movie theater, and I would always swear that I'd go see a movie there someday. By some small miracle, the Drive-In is still operational, but thus far I have failed in my quest. And this time I failed again. 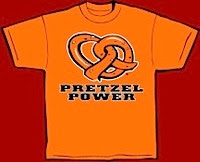 So instead of catch an outdoor flick, Randy and I caught up with the Reids, then swung into town to pick up some munchies for the flight home, along with a pair of Freeport Pretzel T-shirts. By an act of sheer genius, the powers that be at Freeport High School chose the pretzel as their mascot, a move that must be celebrated at every opportunity. (According to the Reids, there is another high school somewhere that also uses the pretzel as a mascot, which just goes to show that divine inspiration is never limited to one community or people...we truly are one human family.)

The next morning, we cruised into town for the start of our 9am church meetings, where I caught up with several old friends. Strangely, so did Randy, who discovered that two of his friends from high school had moved to the area for work. I shot the bull with people like Bishop Thompson and Brother Rice, who may or may not still believe that in the afterlife we will all be nudists with no sense of humor. His rationale is that--

A: As perfected beings we will have no need for modesty, and thereby underwear, and, 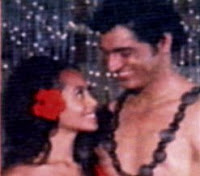 Needless to say, Brother Rice is one of my favorite people of all-time, and only part of that is due to the fact that he knows most of the cast of "Johnny Lingo". (He was living in a school bus on a beach in Hawaii while playing bass for a surf band when the film was being shot).

But seriously, that is one of the bittersweet things about returning to the field. While it is great to see old friends and reconnect with old memories, it is sad sometimes to realize what kind of life you had. The days may have been long, the rules may have been stringent, and people still may have thrown bricks through our back windshields, but there was something wonderful about living a life that was so focused and uncluttered. 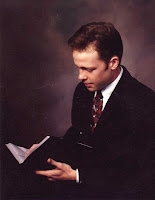 A life that was spent almost completely in the service of other people, and totally based around sharing the Gospel. I don't think I've become a wicked person in the time I've been home, but I certainly don't put the focus and attention into being good as I did when I was in Illinois. The demands of regular life don't really allow it. Even if you're trying your best, simply switching from a life of 24/7 selfless service to a normal life filled with more selfish pursuits like school, work and dating is enough to knock down the purity meter a few notches. That's probably why a lot of people say their missions were the best two years/eighteen months/six weeks of their lives.

It may feel like that sometimes, but I maintain that my best years are still ahead. Behind the wisecracks, I remain a defiant optimist. So instead of get into a funk about how good I used to be, a pilgrimage to the mission field is a recharge, and a reminder of where true happiness comes from. Which is what it should be.
Posted by The Professor at 2:12 AM