My trip to Chi-Town was the first real testing ground for the Canon 40d I picked up a month ago. For the camera-uninitiated, the 40d is a really nice entry-level professional camera that is totally over my head. Seriously, I was afraid to shoot with the thing for the first week because I thought I was unworthy.

Luckily, Chicago loosened me up, and here are a few of the highlights from the trip, as seen through the eye of my magic lens: 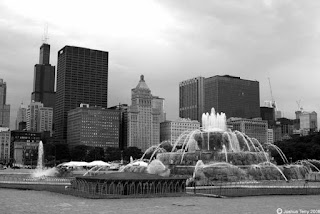 Here are a pair of Chicago's most celebrated landmarks, The Sears Tower and Buckingham Fountain. This was actually the first time I'd ever seen the fountain up close. It is quite a bit larger than I expected. From this angle, the Tower doesn't look that huge, but if you back off the skyline several miles, you see how much taller than everything else it really is. Super cool-looking building, that Sears Tower. 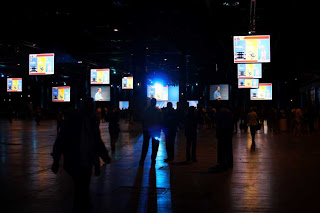 Most of what I saw in the eBay Live! convention was pretty conventional, for lack of a better term. But one striking image was the setup for the morning keynote address (the one everyone tried to leave halfway through). From the back of this huge warehouse-room, it really looked like some kind of Big Brother affair, with lots of monitors and dramatic lighting. I'm pretty happy with the way this one came out. The mood actually comes through pretty accurately. 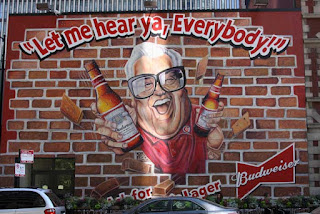 The mood doesn't come through as strongly with this shot, mostly because of this stupid swath of sunlight that cuts through the middle of the wall (first lesson of photography: timing is everything). Still, this super-huge painting on the side of Harry Caray's Restaurant is too classic not to post. (Again, for the uninitiated, Harry Caray was the longtime play-by-play man for the Chicago Cubs up at Wrigley Field. And yes, he had a reputation for "enjoying" his job.)

On the other hand, this shot is a great example of both timing and luck. I didn't bring a tripod along, which makes it next to impossible to get a decent "motion" shot. (Usually your hand shakes too much and everything gets blurred). But somehow I managed to keep the bridge in focus while nailing whatever kind of car that is slashing through the frame. 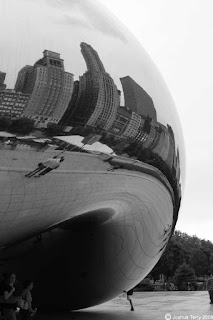 This is one of the newer Chicago landmarks, a huge reflective art piece up in Millenium Park that the locals have dubbed "The Bean". I don't even know what it's really called, all I know is that it makes for some sweet photographs. 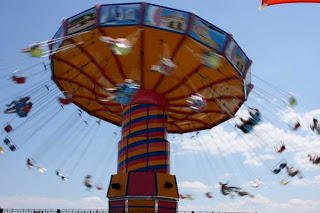 Another motion shot, this one was taken out at Navy Pier during a two-hour period where I was panicking because I had forgotten to put any sunblock on the top of my head. In case anyone is wondering, there is no place to buy sunblock at the pier itself. Hopefully this shot was worth sunburning my dome for a day or two. 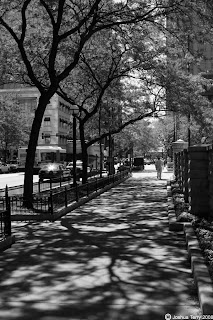 I really like the mood of this one. Taken over by the Water Tower (reportedly the only building that survived the legendary Chicago fire of 1871, which was started by Mrs. O'Leary's cow), there aren't any real landmarks in it. I just liked the shadow of the trees on the sidewalk and such. 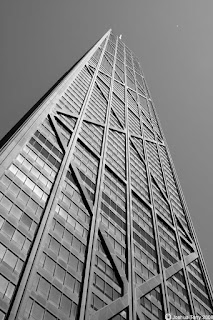 The Hancock Building is the second-tallest skyscraper on the Windy City skyline next to Sears, coming in at 100 stories tall. Two years ago I visited the observatory on the 94th floor. They've got this section that isn't glassed in where you can feel the wind. Pretty freaky...especially for a guy who isn't keen on heights. 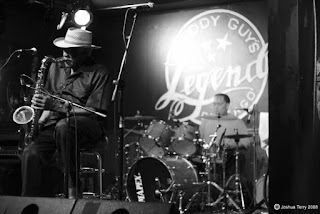 Another lucky one, since I didn't plan on keeping Eddie in focus while letting his drummer get blurry. Come on, why would I ever intentionally blur out the drummer? I like the mood in this one too, though it reminds me that I should have taken my camera to the Blue Chicago, too. Dang. 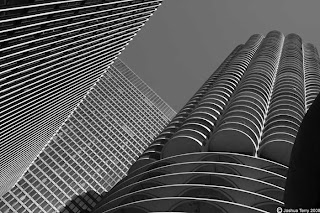 The tough thing about shooting skyscrapers is keeping them in the frame, but it also has the side effect of creating some interesting shots if you mess with the angles. The building on the right is one of the Marina Towers, these corn cob looking things that have open-air parking for the first twenty stories or so. Kind of cool, I guess, though you really need to be careful when you back into your spot. 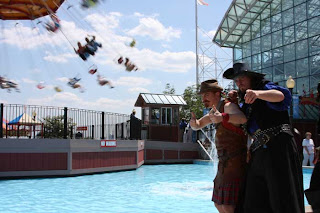 This may be my favorite shot of the whole trip. No one will every pay big money for a print, but you can't deny the charm, baby. I have no idea who these guys are. They just walked through my frame when I was trying to do motion shots of the swing ride (as you can tell by the blur in the upper left corner), and when they jumped back out of the way, I invited them in for a little immortality. Obviously they were up for the opportunity. I didn't get their names, but maybe if fate has a hand in it, I will be able to eat at Giordano's with them someday.
Posted by The Professor at 8:14 PM