Any worthwhile trip to the Windy City must meet two essential criteria:

1. You must eat deep dish pizza.

2. You must visit a blues club.

Randy and I covered item #1 the first night we were in town, and we took care of #2 the next night when we met my friend Cherina at Buddy Guy's Legends, a club on the southeast end of the Loop. Even though Buddy Guy's has one of the best reputations in the city for live music, this was my first official visit. (My first unofficial visit was when I posed outside of the club for a striking portrait in 1999). The band that night was The Wolfgang, led by Eddie Shaw. Eddie's band was named the Wolfgang because he used to play sax with the original Howlin' Wolf band back in the day. He also played with the Ike and Tina Turner Band, which is also impressive.

Eddie handles saxophone and lead vocal duties, backed by a bass player, a drummer, and his kid (I assume) on guitar. The younger Shaw happens to play a triple-necked guitar, with one twelve-string neck and a pair of standard six-strings. Pretty funky, but to be honest, it seemed a bit much.

That being said, Vaan Shaw is a terrific guitarist, and having braided hair that reaches down to your waist is a definite bonus for any musician. But the clear star of the group was Eddie, who managed to muscle out a gutsy performance even though he was sitting down most of the show. Whether he was barking vocals or blowing his horn, the sound coming through the PA registered every ounce of emotion the cagey old veteran could muster. He played the blues as if he wanted to smash you over the head with them.

The next night, after watching the Second City Improv Players perform for the eBay Power Sellers (and me...an eBay Mediocre Buyer), Randy and I hoofed it over to 7th North and Clark Street to hear some more music. This was my third visit to the Blue Chicago--the first was back in '99, when I sang my semi-infamous "black drawers" solo--but it was the first time I didn't see club regulars Big Time Sarah and the BTS Express. There was no need to worry, though; the moment Randy and I ducked into the club and sat down at an empty table right up front, it felt like coming home. Unlike Buddy Guy's, The Blue Chicago is more of a hole-in-the-wall joint, smaller and more intimate than the Wabash venue. Plus the band is crowded onto a tiny riser that only sits six inches off the ground, which means you can feel the music through the floor. And man, is it good music. 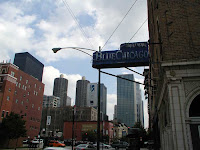 Since Big Time Sarah was off that night, Randy and I got to see the John Primer Blues Band, which was every bit as authentic, entertaining, and fun as the Express. We arrived just as they were wrapping up their first set, and we'd been sitting down for about three minutes when they whipped into a cover of Ben E. King's "Stand By Me" that just about broke my heart. In a good way, of course. See, that's the thing a lot of people don't understand about blues music: it's FUN.

Sure, there are a lot of blues guitarists out there that can scrape out the kind of soul-stirring solos that will make you feel like your whole world is coming to an end. But most of the time, blues music actually functions as a way of making you feel better about life. That things may stink now, but at least there's still good music to make you smile. As if singing about your heartbreak will exorcise it. And it does, if only for a little while.

Of course, all was not wine and roses at the Blue Chicago that night. Maybe it was poetic justice, but no sooner had the band started into "Stand By Me" and invited couples to come out on the dance floor than I spotted an absolutely stunning girl sitting at the table next to me. As soon as I saw her my heart sunk. She had long dark hair and penetrating eyes, and looked just like the kind of girl who would dig good music, insightful conversation and perfect city nights. She might even go for a guy whose biggest current aspiration was to eat at Barbacoa every day for a week.

She was also sitting with her parents. Drinking a beer.

I really can't win, you know.

Sure, there was a part of me that hoped she and her family were drinking Apple Beers, that they were in town from Salt Lake on a church history tour and had decided to pop in to an authentic Chicago blues club after a day at the temple up in Glenview. But I knew better. I knew that once again I was longing for a beautiful girl that came from a totally different world, and that even if I could be the means of introducing her to the Gospel, I would still have to figure out how to go introduce myself to her while she was sitting at a table with her parents.

Pretty girl drinking beer with parents at blues club = valid reason for Josh to go up on stage and ram his head through the bass drum.*

This isn't the first time this has happened. A year or two back, I saw Leon Russell at The Depot in Salt Lake, and towards the end of the show I caught this girl dancing up front with a guy that appeared to be her dad. She was lovely, of course, and was wearing a T-Shirt with a huge Rolling Stones logo on the back. They weren't even drinking, as far as I could tell, but I still had the "Papa don't take no mess" problem to deal with. Then a few months later I faced a similar problem during the Steve Winwood concert (also at The Depot), when I wound up sitting next to this other gorgeous girl who just happened to be there with a stick-in-the-mud boyfriend who wouldn't even stand up for a song like "Gimme Some Lovin'". Tragic. Absolutely tragic.

I realize that there are maybe three people that might understand this, but I can think of few things cooler than walking into an obscure Chicago blues club with my wife someday and dancing to a Ben E. King classic. Doing that with a wife that actually likes Ben E. King and isn't just humoring my obscure retro tastes would be even better, but at this point I might have to be satisfied with the latter.

Fortunately (or maybe not), my beer-drinking dream girl and her parents took off after the end of the first set, sparing me two hours of making fast glances off to my left while trying to come up with a strategic way of distracting her parents instead of enjoying the music. It's a lesson I learned back when I made the mistake of getting a date to go see "The Phantom Menace" on opening day: sure it's cool to take every opportunity to go out with a girl you're crazy about, and it's very cool to go see the first "Star Wars" movie in sixteen years (even if the event does involve Jar Jar Binks), but combining the two is a bad idea. Worlds collide, and as George Costanza might point out, a Josh divided against himself cannot stand.

So luckily Hopeless Romantic Josh was pushed aside, and Blues Club Josh was left behind to enjoy the music and five dollars' worth of Ginger Ale (the Blue Chicago now carries a two-drink minimum). Primer's band didn't play too many more tunes I recognized (not that it mattered; I'm well aware that as fun as it is, most blues songs are pretty much interchangable), but we still had a great time. No one got up and asked for volunteers to come up and sing from the audience, so I didn't get to re-live my shining moment, but I did get to watch this really creepy couple dance to a half dozen numbers, which was at least memorable if not entirely enjoyable. (They were creepy because they were really, really good dancers, but in more of a "we used to be on the ballroom dance team in college, now we're busting out our very coordinated slinky moves in some random bar in the Loop" kind of way. Plus the guy kept eye contact with his woman in a way that was halfway between "I'm gonna get some tonight" and "I'm going to bury you in my backyard while listening to The Pointer Sisters". Ew.)

When you add it all up, I still prefer the Blue Chicago to Buddy Guy's, but I'm not going to complain about either place, given that they only charged me ten bucks to get in. (I'm not even going to say how much I shelled out for Coldplay tickets last weekend, or how much I paid for the Police ticket I'll be using later this month). As The Blues Brothers might say, that's a lot of entertainment for ten dollars. And they should know: growing up on that movie is one of the big reasons I was sitting in those dark clubs wishing I had a girl to dance to Ben E. King with. 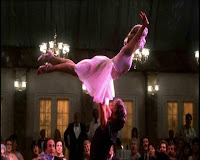 *It occurs to me now that if I had been wearing tight pants and sporting a sweet 80's mullet at the time, I could have walked over to their table and re-created the climactic talent show scene at the end of "Dirty Dancing", where Patrick Swayze stalks over to Jennifer Grey's table and tells her parents that "nobody puts Baby in a corner". Then I might have been justified in picking her up by her waist and doing that weird swan dance while all the other patrons moved in choreographed rhythm behind us. But I always get these ideas way too late, and it is beginning to cost me.
Posted by The Professor at 3:01 AM