After my previous post, one of my faithful readers suggested I might consider the flip-side of my Marryability argument.  I don't know, in the interest of humility or honesty or something.  Well, never let it be said I don't value the input of my readers.  Last time I gave you the reasons I am a catch.  Here are the reasons you might have to release: 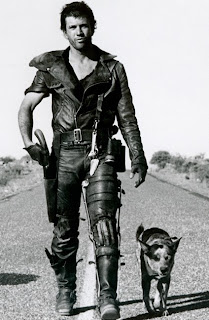 1. I am not a homeowner.  When the zombie apocalypse hits, we will not be holed up in the basement with all of our food storage.  Chances are we will hit the highway Mad Max style, gunning down Z's at 80mph and fighting road battles for precious, precious gasoline.  Besides, after you've participated in enough Saturday morning Elder's Quorum moves, you realize the best kind of life is the kind that is portable.

2. I never eat at the table.  For some reason, I have to be watching something or reading something while I'm eating.  I'm not sure this explains why you can often find me eating shrimp cocktails on the couch downstairs at 1AM while watching downloaded episodes of "Fringe," but it's a start.

3. I refuse to use emoticons.  This one goes for dumb acronyms, too.  Six months ago a girl rejected me via text, and the last line of her message was seriously "Best of luck 2 U."  I felt like I was getting dumped by MC Hammer.  Yes, emoticons and hip acronyms may help the interpretation of your tone (IE, sarcasm), but honestly, if you're a decent writer, that shouldn't be a problem.

5. I hate minivans and SUV's. I love to drive, and I'm hard pressed to think of two vehicles that negate that passion more, whether you're behind their wheels or just stuck behind them on a long road.  Yet these are the vehicles you need once your family passes a certain threshold.  I honestly think I'd rather drive a school bus.

7. I am a nerd. Maybe the video game thing isn't a problem for me, but my inner geek was branded the minute I jumped in my car and set out for Comic-Con 2007.  Or the minute I approached George Lucas in a Chicago mall.  Or...well, pretty much since this happened.

8. I have a diminished vertical leap. All great athletes have to adapt their games late in their careers.  Karl Malone developed a jump shot.  Michael Jordan did underwear commercials with Kevin Bacon.  I used to be a short speedy guy who could catch you from behind on fast breaks.  Now I'm a short slightly more built guy who just pushes you out of the way.

9. I am physically incapable of tanning. This has made certain recreational pursuits like boating problematic.  I'm kind of like that assassin guy in DaVinci Code, only without the quiet moments of naked self-flagellation.


10. I like who I am.  There's a prevalent idea out there that suggests every girl gets married with the intention of molding her husband into the man she wants him to be.  I have caught glimpses of this on different dates over the years, and it did not go over well.  I like who I am.  I like my Velvet Elvis paintings.  I know I have weaknesses, and I am working on them.  But let me repeat: I like who I am.


11. I am a stubborn, defiant, competitive SOB who follows his gut and doesn't like to be nagged.  In other words, I am a man.
Posted by The Professor at 8:30 AM